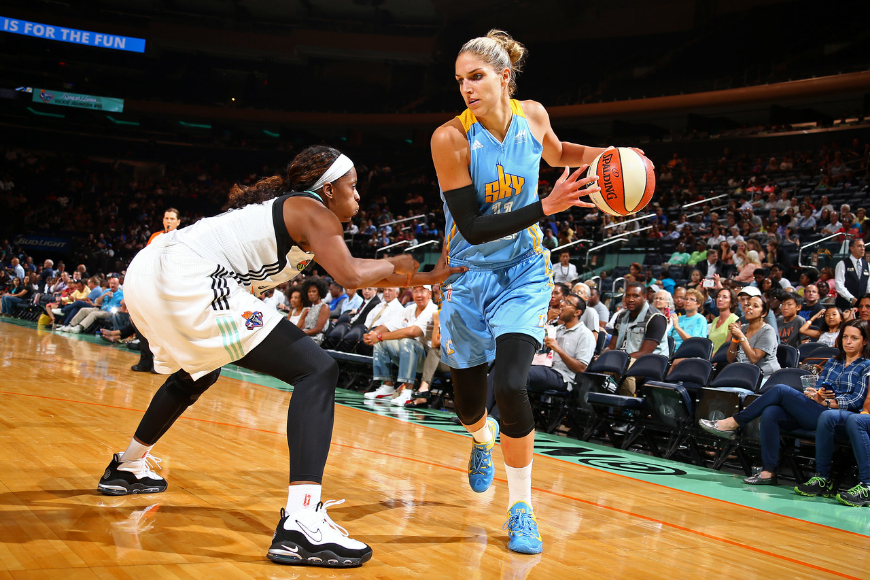 Los Angeles legend Lisa Leslie may have just entered the Hall, whilst former Sparks teammate Candace Parker rivals the Tulsa Shock’s Skylar Diggins as the poster girl of the WNBA…but neither of them is MVP.

The Most Valuable Player of the Women’s National Basketball Association for the 2015 season is Elena Delle Donne of the Chicago Sky.

At just 26 years of age, EDD has confirmed herself as not only the best female basketball player of the year but one of the best basketball players around today, regardless of gender. Her sister team to the Chicago Bulls may be sponsored by Boost mobile, but it was Samsung who called in with the MVP trophy this year as sponsors of the WNBA.

Five-time, record Player of The Week, Delle Donne has only been in this league a couple of years, yet the second pick in the 2013 WNBA draft in just 31 games has averaged 23.4 points per, the fifth-highest scoring average in the history of this association. No wonder this guard/forward swing-woman received 38 out of 39 first place votes for nearly a clean, 100% sweep of the panel of sportswriters and broadcasters for her first MVP win.

Now the air of the playoff potential for the second-seeded Chicago out East is about to touch the sky for the more valuable award tour to come.

Highlights of the spirit of the Sky’s year include notching 40 points twice, 30 points five times, and 20 points 21 times that all helped lead the Sky to the tip of a 23-13 hook that see them primed for domination in a league full of talent from veteran legends like Sue Bird to youngsters like Maya Moore (last years MVP and this year’s runner up). The Sky are flying now with Chi-town’s finest who also averaged 8.4 rebounds and 2.06 blocks in her re-paint of the post. Her most impressive statistic of significance by far is her 95% free-throw shooting at an almost perfect 207 out of 218 clip (including a Sky box record 54 consecutive). She missed just over only 10 free-throws…can you believe that? Can most NBA guys do that?

Coming in third, fourth and fifth respectively were Tina Charles, the 2012 MVP of the New York Liberty, with 181 points, followed by Phoenix Mercury center Brittney Griner with 70 points and two-time MVP forward/center Candace Parker of the L.A. Sparks with 50. With all this talent it’s clear it’s been an amazing year for WNBA basketball. Expect great? This may just be the best yet…and it’s all led by the epic play of Elena. Delle Donne demands a double-team each trip down the floor on the way to her own double-double. From now on that’s what the D.D. stands for and the energy from EDD is going to propel the Sky even further into the rafters of the stratosphere.

Soon her team, like her will be untouchable…that’s the Chicago way!