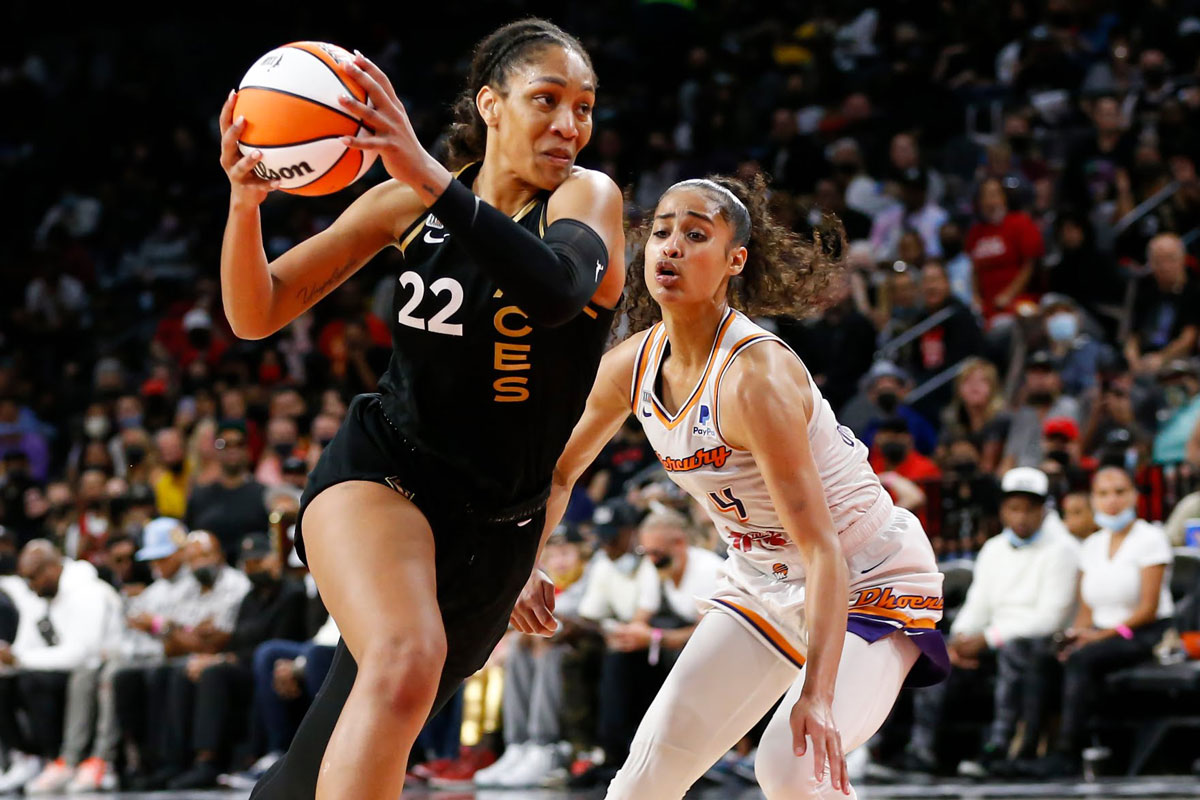 Las Vegas Ace A’ja Wilson had already blocked the opposition from winning her Defensive Player of the Year award last week. And now, the franchise player has just boxed out the WNBA league MVP trophy.

Make that two KIA WNBA Most Valuable Player crowns for the 2020 MVP. The seventh player in this league’s 26 years to win the award more than once. Lauren Jackson, Lisa Leslie and Sheryl Swoopes all have three for their legend. Cynthia Cooper, Elena Delle Donne and Candace Parker, two.

Holding court with defensive dominance, A’ja became the fifth player in league history to win the DPOY and MVP trophies in the same year. Following Yolanda Griffith, Leslie and Swoopes, who won both in the years 2000 and 2002.

Wilson’s trophy cabinet only looks to get bigger as she powers forward.

The biggest prize is still on the horizon of the desert. With only the Sky or the Sun in the way.

Wilson and her Ace team just weathered the Seattle Storm for an epic semi-final’s series. Her stat for stat opponent in the paint, Breanna Stewart came second in the MVP voting this year. With 446 points to A’ja’s 478. Wilson’s teammate Kelsey Plum came third with 181 points, after her own stellar season.

No matter what, it has been one incredible campaign, with so many inspired talents of influence.

Fifth in scoring, but second in rebounding, A’ja Wilson averaged a big 19.5 points and 9.4 rebounds per game. Shooting a crisp 50.1 percent from the clip. With 17 double-doubles to lead the league. Just like she did in blocks with 1.9 per.

Add 1.4 steals per game and a career-high in defensive rebounds (7.6) and peak levels have just been unlocked.

Studying under Dawn Staley, the statuesque South Carolina star with her own statue at the Gamecock alma mater, now has the status of the league’s best. The first pick in the 2018 WNBA draft just led her Las Vegas Aces to the number one seed. And this is after the franchise face lost the power of Liz Cambage in her front-court.

Well, it is all her own now. Along with the latest MVP trophy, designed by Tiffany & Co.

How’s that for hitting the jackpot on some serious bling?

Las Vegas are really rolling this year, as they head to the WNBA Finals. From Wilson’s dual award win, to Becky Hammon being named Coach of the Year in her first season.

Now it’s time for them to collectively win the biggest chip.