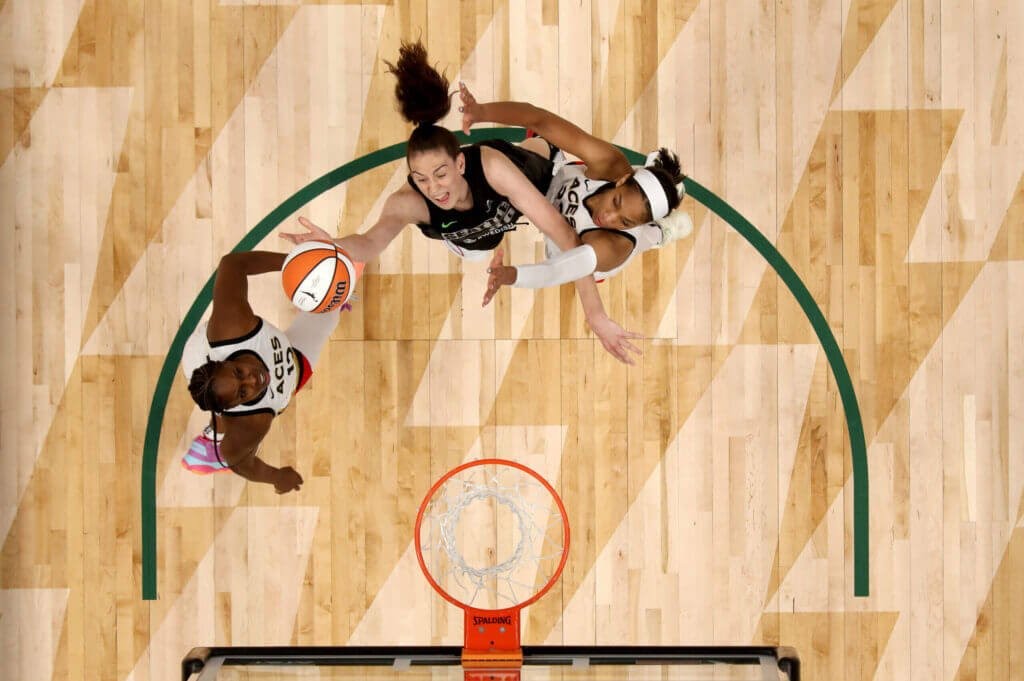 Seattle stormed Game 1 of the WNBA semis behind a vintage Sue Bird performance, who again in Game 3 hit a clutch triple with spare seconds to go in regulation.

But then Ace Jackie Young banked a 0.2 go-ahead buzzer beater to send this one into OT. All before, coach of the year Becky Hammon’s Las Vegas pulled away, 110-98 in the extra period, to take a 2-1 semifinals lead over the Storm in this best of five game series.

Game 4 could be the last time we see the greatest of all-time Sue Bird play, although we sure hope not. Complete in a calendar that has marked more goodbyes to GOATs this month than a farm closure. From big W legend Sylvia Fowles, to Serena Williams serving for the last time at the US Open.

Advantage; no one. Except their competition, that is.

Just don’t count Sue out, or on her giving up so easily.

Game 2 saw newly crowned Defensive Player of the Year, and surely soon to be MVP Aj’a Wilson and two-time champ Breanna Stewart go at it, 30 for 30. Wilson with 33 points and 13 rebounds. Stewart 32 and 7 documented. But in Game 3, Aj’a became the only player in the history of the league to have two back-to-back playoff games, with 30 plus points and 10 or more rebounds. 34 and 11 to be box score exact.

Not even Stewie (20 points) has done that…yet.

As of next game she may have to wait a little while longer to get her chance.

But we shouldn’t write her off either.

Wilson has just owned the rock, and soon that leg covering sleeve will become as infamous as an iconic Iverson arm one. All as Aces apparel make their rounds across the Sin City strip, just like a Hard Rock t-shirt throughout the globe.

Yet this series is more than just one player, or team. With both robust rosters stacked like money. Names, Bellagio big.

We have Olympians, Gold Mamba’s, a 3×3 winner and even another big great in Seattle’s late season acquisition of Tina Charles, after her Cambage like divorce with the Phoenix Mercury.

As for the Aces. They are playing this tight, even with an injured Dearica Hamby returning to limited minutes. The further you get down their roster, the more you see names like Riquna Williams, who you would still trust off the pine with the game on the line.

In downtown Vegas, Plum may be the only player with an outside chance (and we’re talking way outside, like her range) of taking Aj’a’s Most Valuable Player trophy. But right now, it’s Chelsea Gray (29 points, 12 assists and five rebounds) in this roster roulette deep team that’s cranking it up from the perimeter. All fruit. The buckets of her water are straight cash and instantly come with a timeout whistle from the opposing bench.

We need to talk it over.

Just when Seattle thought they couldn’t contain Wilson, they now have to dream up new playbook ways to keep Gray from her areas. Which right now seem limitless. Chelsea could hit from Greenwich Village, NYC at the moment. One shot late in the game looked like she was taking a mid-air bow. No need to hold your applause.

The game isn’t Texas hold ’em, and it’s no straight flush either. But no bluff, the Aces are about to become WNBA royalty.

That is, unless the Queen has something to say. Breathing fire into this house like a dragon. The throne is yet to be taken and when it comes to one last flight from Bird, you know it’s going to be first class.

With all due respect to the reigning Chicago champions and their own series as Sky meets Sun, this isn’t even the Finals yet. Take this with the EuroBasket for this international game and there’s no need to say you miss basketball.