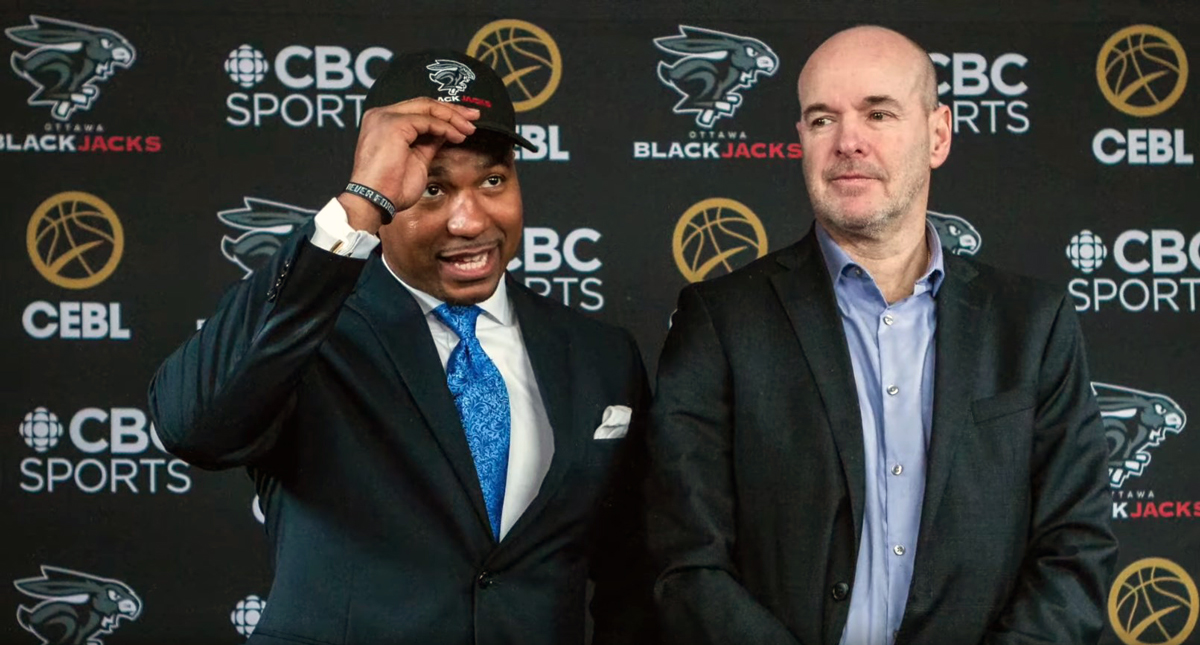 The pieces of the puzzle are coming together for the Ottawa BlackJacks basketball team.

“Obviously, Osvaldo and I have had a long history together since he was probably 15 or 14, playing club basketball on the Ottawa Guardsmen to his time at Carleton (as player) and then he was my assistant coach at Carleton”, discussed Smart during the press conference.

“Os and I have worked together from a coach, assistant coach perspective, so I know what he’s about in terms of what his exceptions are, and we’re very much inline in terms of what our expectations are, and he knows how I operate and is comfortable working with me. So I think it’s an obvious fit, it’s and easy fit and we are really excited to start working together and put a team on the floor”, further elaborated the former Carleton Ravens on his selection process.

“It’s the first time he’s called me Osvaldo so many times since I was 15, I’m not really used to it.” a smiling Jeanty opened-up about his longtime head coach and mentor during his introductory speech.

The duo go back to late 1990’s with Jeanty playing for Smart at the Midget and Ontario Basketball U-19 Provincial teams. Under Smart’s guidance, Jeanty flourished as player helping turn the Carleton Ravens’ basketball program into the powerhouse that it is today.

The Ravens’ won five (2002-2007) straight U Sports men’s basketball championships during their time together as a coach-player combo — with Jeanty earning the Final 8 Jack Donohue championship MVP trophy twice, during his freshman and junior campaigns. A proven winner at all levels, Jeanty turned an outstanding collegiate career into a six year pro career, earning a championship with the Giants Nördlingen of Germany’s ProA league.

Inducted into Carleton Ravens Hall of Fame in 2015 — Jeanty earned an additional two titles as a coaching duo during their three-year (2016-19) stretch.

Both Jeanty and Smart were featured on the cover of the first-ever Canadian Basketball Magazine on March of 2005.

“I just wanted to say how thankful I am to Dave to Mike (Morreale) to the league for giving me this opportunity, also just for the Ottawa community. I’ve been here since I was six-years old and I appreciate what the community has given to me and the opportunity to be able give back to the community that has been so good to me is something that I’m very thankful for. So thank you and I look forward to really bringing a good product out there for the city, for the team and really representing the league the right way.”

As for the type of style and brand of the basketball the BlackJacks expect to play — Jeanty offered a glimpse of the same championship formula that has led to many successful moments between the now general manager and head coach tandem.

“He’s put into my head since I was 15, in terms of the keys to winning championships and I tend to follow the same of idea. You defend, you rebound, you don’t turnover the ball over — but at the same time you have 24 seconds on the shot clock so you want to play as fast a possible while not turning over the basketball.”

The attention now turns to rounding out the remaining coaching staff positions and the complex process of putting together a championship calibre team — that will undoubtedly have it’s sights on establishing an early grip on the proudly Canadian made Canadian Elite Basketball League (CEBL) championship trophy.

Coincidentally, Jeanty’s head coaching debut will be against Raso as the Ottawa BlackJacks will kick-off the inaugural 2020 season on the road on May 7th against the Niagara River Lions. The BlackJacks home opener is scheduled for May 14th against the Hamilton Honey Badgers.