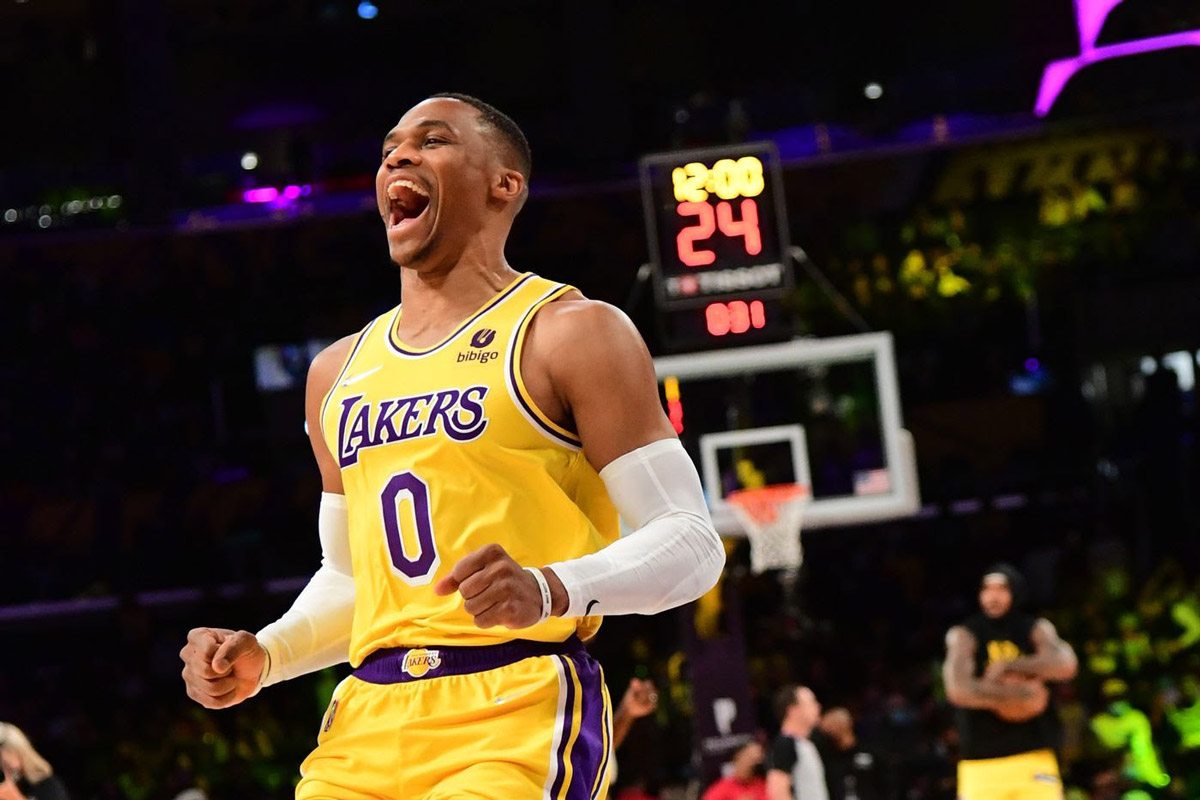 These words shine across a shirtless Russell Westbrook and on the set of a television talking too much about him. All as different colors are filtered through. Changing like the number of times this former Oklahoma Thunder City, Houston Rockets, Washington Wizards superstar and fashion icon of “geek chic” has changed clothes.

“Meet the man you thought you knew”, the latest documentary from Showtime tells us. The same network that gave us Kobe Bryant’s ‘Muse’.

“Everyone just needs to lay off of Russell”, the greatest Laker tells us about a then future one. “He’s got the same type of dog that I had in me”, he says of the “bad little dude” who even caught hell from Magic Johnson, the greatest point guard of all-time, for being the, “worst point guard in a championship finals, (he’s) ever seen.”

“You know the Greeks didn’t write obituaries. They only asked one question after a man died: “Did he have passion?””

Russ has this in abundance. Click your remote to ‘Passion Play’ and you’ll be reminded just how much.

And just how much hate he has got over his storied career that has seen him make statistical history as Mr. Triple-Double.

Stop taking hot takes from Skip, Stephen A and all them and listen to an award winning Oscar Robertson who also has a ring to his name. These stats aren’t just empty calories.

And now like it’s meant to be, Westbrook is out West with his hometown Lakers.

But yet the hate still percolates like refreshing your timelines. Even though he’s just notched his second-straight triple-double. Leading the Lakers to a 120-117 overtime thriller win against the Miami Heat with 25, 12 and 14. A team that just over a year ago the Lakers were bubbling against in the Florida Finals.

That’s two teams ago for Russ. After a Rocket reunion with James Harden and a blockbuster trade for John Wall.

Sure he needs to take better care of the ball before he averages a quadruple double with turnovers attached. Like the Wilson was a child. But don’t baby the man who likes to rock it in celebration. He came to play.

In this documentary they call him a sports car. This writer used to call him dynamite like BTS (but that was a compliment). An NBA influencer on Twitter last night said he was like cocaine.

Shannon Sharpe once said he was like the beautiful girl that let’s face it he was implying is kind of a bitch.

No wonder Westbrook told one reporter he just didn’t like him when he was asked what’s wrong.

Why you know what. Why would he?

The point guard position of Stockton and them changed a long time ago like the length of the shorts. Allen Iverson received his fair share of hate, but was also treated like a God. Even when his press conferences turned into talks about practice. A.I’s shot selection had as many questions as Russ’. But it seems like Brodie is the one who has to answer for it all, not Bubba Chuck.

From nothing, numero zero came from relative unknown to UCLA star alongside Kevin Love. The spirit of his late friend Khelcey Barrs who sadly passed away at 16 living through him, engraved on every sneaker.

That’s why he was drafted fourth overall by the then Seattle Supersonics. That’s how his Sonic Boom with Kevin Durant led the Thunder to Oklahoma and the Finals against LeBron, Wade and Bosh’s big Miami three South Beach talents.

Led the league in points. Led the league in assists. Beat a triple-double record that stood since 1962. That’s more than a half-century. Put up 20, 20 and 20 for the late, great Nipsey Hussle. Was your leagues MVP. Twice. Back-to-back, Magic! Yeah!

And now the Long Beach, California native like Snoop Dogg is crip-walking down the court in Hollywood as a Laker next to King James, Anthony Davis and fellow Hall of Famers like Carmelo Anthony tapping three-fingers to his dome from downtown.

We haven’t even seen the 360 of the associations new big-three in full effect yet. That’s injuries for you. And the aging Lakers are nursing them like LeBron, Trevor Ariza and Kendrick Nunn amongst others who have been revolving around that in and out door like Laker coaches between Phil Jackson and Frank Vogel.

Hate him now, but don’t doubt when it comes to the floor that just like for his family, Russell is “all in, all the time” like this documentary says.

Like ‘Bron tossing the chalk, Brodie starts every game he plays by running from one end of the court to the other. Fists clenched only with excitement. A look of happiness on his face like the one a father gives his child learning to walk for the first time. He slows to a crawl on the baseline and screams with pride at the faithful fans.