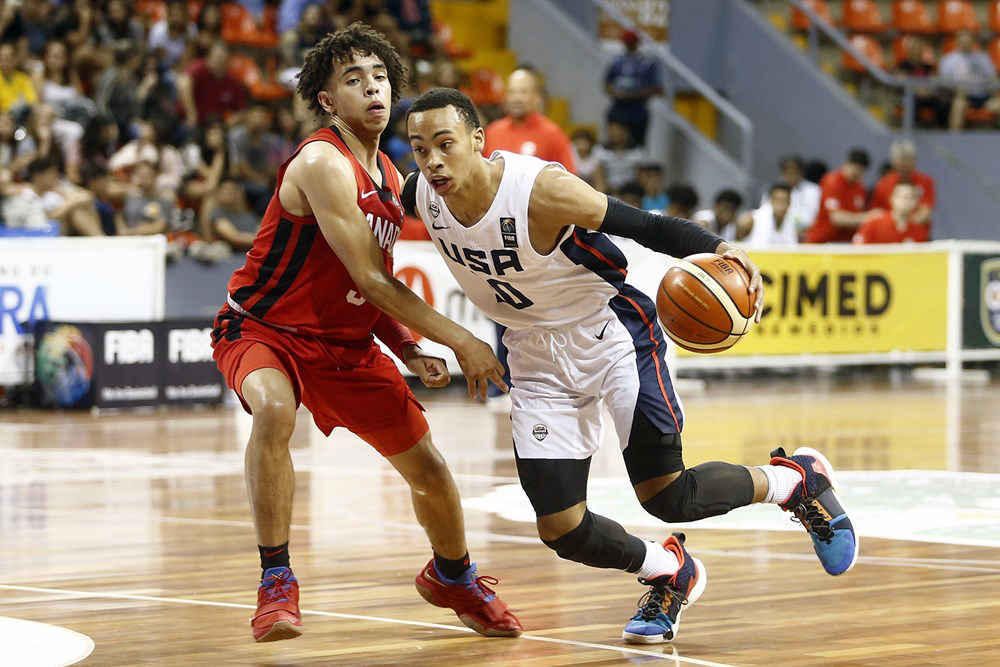 Canada’s U16 Men’s national team captured a third straight silver medal at the 2019 FIBA Americas championships falling 94-77 to the United States of America in the Gold medal game in Belem, Brazil.

Team Canada kept the game tight for the first 10 minutes and took their only lead of the game at 17-15 with 2:02 in to play, before a late triple gave the USA a 18-17 lead to close the quarter.

The USA took the game to the Canadians in the second-quarter, outscoring Canada 27-15 for a 45-32 half-time lead.

Canada showed some bark in the third-quarter with solid defensive stretches and back-to-back dunks, cutting the lead to single digits on multiple occasions and closing in at 57-51 of the Americans with 4:34 to play.

The Americans rallied with a 13-6 run to end third-quarter for a comfortable 72-57 lead and put it in cruise control in the fourth-quarter — stretching the lead to a game-high 21 points.

Despite the loss, the final 17-point deficit ties the lowest spread between the two squads in five championship or semi-finals games at the FIBA Americas tournament.

Enoch Boakye (Brampton, Ont) 12 points and 13 rebounds concluded the tournament with his third straight game in double-figures rebounding and was the third top rebounder in the competition at 10.8 per game. Boakye had of two of the tournaments top 10 rebounding performances with 17 against Mexico and 16 against Dominican Republic.

Both Houstan and Ryan Nembhard were named to the tournaments all-star team alongside Dominican Republic’s Jean Montero — including the USA’s Jalen Durne and tournament MVP Christopher Livingston.

Canada finished the tournament 5-1 with group B victories over Uruguay 101-63, Brazil 90-67, Puerto Rico 96-76 and wins over Mexico 95-78 and 97-81 over the Dominican Republic in the quarter-finals and semi-finals respectively.

The U16 Canadian squad has reached the podium five times since the inaugural, bi-annual American zone tournament kicked-off 10 years ago in 2009 — earning three silver and two bronze medals. Canada lost a heart-breaking 65-64 semi-finals loss to Argentina in 2013.

Canada has qualified for the 2020 U17 FIBA World Championships where they will look to improve from their 2018 4th-place finish.