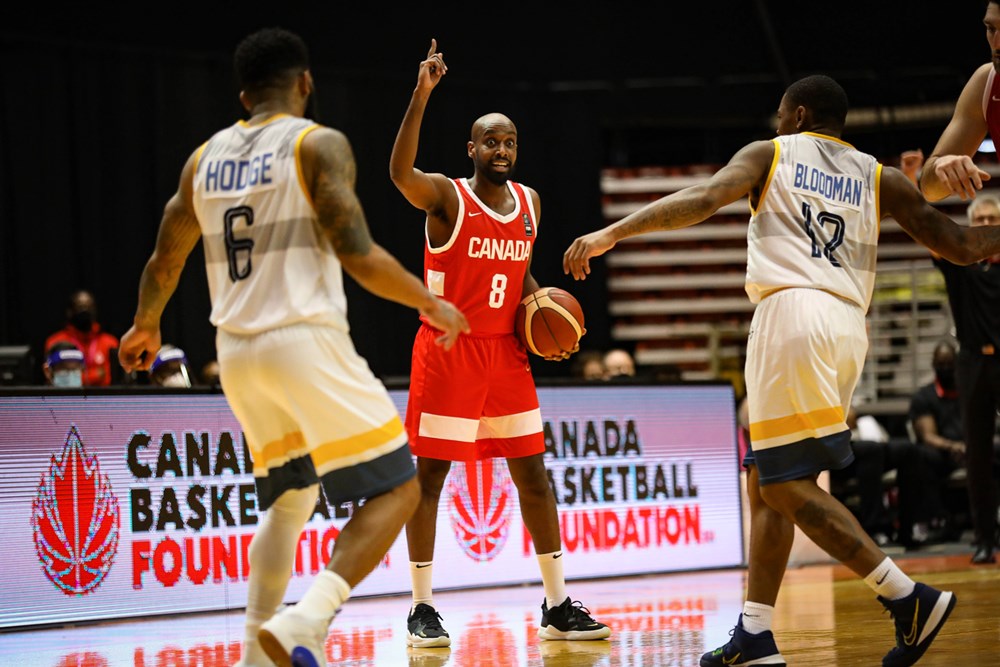 Canada’s Senior Men’s National Team (SMNT) closed out the third and final window of the FIBA AmeriCup 2022 Qualifiers with another nail-biting 95-90 victory over the fast improving U.S. Virgin Islands at the Coliseo Roberto Clemente in San Juan, Puerto Rico.

Johnny Berhanemeskel (Ottawa, Ont) came off the bench for his first minutes as a member of the Senior Men’s National Team (SMNT) and nailed three clutch fourth-quarter three-pointers in the last five minutes to help Canada sweep the two game Group C series.

Leading by a game-high 18 points early in the third-quarter, thanks to a three-point barrage of four straight triples — Canada fought-off a brilliant 44-point onslaught from U.S. Virgin Islands star guard Walter Hodge to improve to 3-1 in the group.

The victory helped Canada clinch a spot in the upcoming 2022 FIBA AmeriCup tournament with two uncertain remaining games against Cuba.

“I thought our defense in the first-half was real solid, I thought we played a really, really, good first five, six minutes of the third-quarter, and then it was kinda the Walter Hodge show for about 10-12 minutes, but I’m proud of our guys, we had a lead, it shrunk, but we kept our lead, we kept our focus, and we played to win at the end.” discussed Canadian head coach Gordie Herbert during the post game interview.

“It wasn’t easy, I mean I think we only had one real team practice before we played the first game and give our players a lot of credit, they came with a great attitude, worked hard in practice, and you know they picked-up stuff really quick, but more than anything it was their mental toughness to come into this kind of situation and play and I thought today we showed even more mental toughness the last five, six minutes of the game.” added Herbert.

Kaza Kajami-Keane (Ajax, Ont.) continued his stellar play for the national team, finishing with a team-high 27 points, game-high 9 assists, 3 steals on 9-of-17 shooting and a team-high 34 minutes. Anthony Bennett (Toronto, Ont.) concluded his two-game stint with a promising 19 points, 9 rebounds and 3 steals on 7-of-9 shooting, including 3-of-5 three-pointers.

Thomas Scrubb (Richmond, BC) added a double-double with 10 points, 11 rebounds and 4 assists and Aaron Best also reached the double-figures mark for his second straight game in a red and white uniform with 10 points and 3 rebounds.

Berhanemeskel added a quick 9 points in just six minutes on a perfect 3-of-3 shooting from downtown. Owen Klassen (Kingston, Ont.) also provided his usual contributions with 8 points and 6 rebounds and Philip Scrubb chipped in with 7 points, 3 assists and 2 rebounds in the winning effort.

Overall, it’s a positive start to the 2021 calendar year for Canada, after a year-long stoppage due to the global pandemic. The remainder of the year is shaping up to be a busy one, with the faith of the two remaining FIBA AmeriCup qualifying games with Cuba still to be decided.

Additionally, the national team is set to host the upcoming 2020 FIBA Olympic Qualifying Tournament in Victoria, British Columbia from June 29 to July 4.