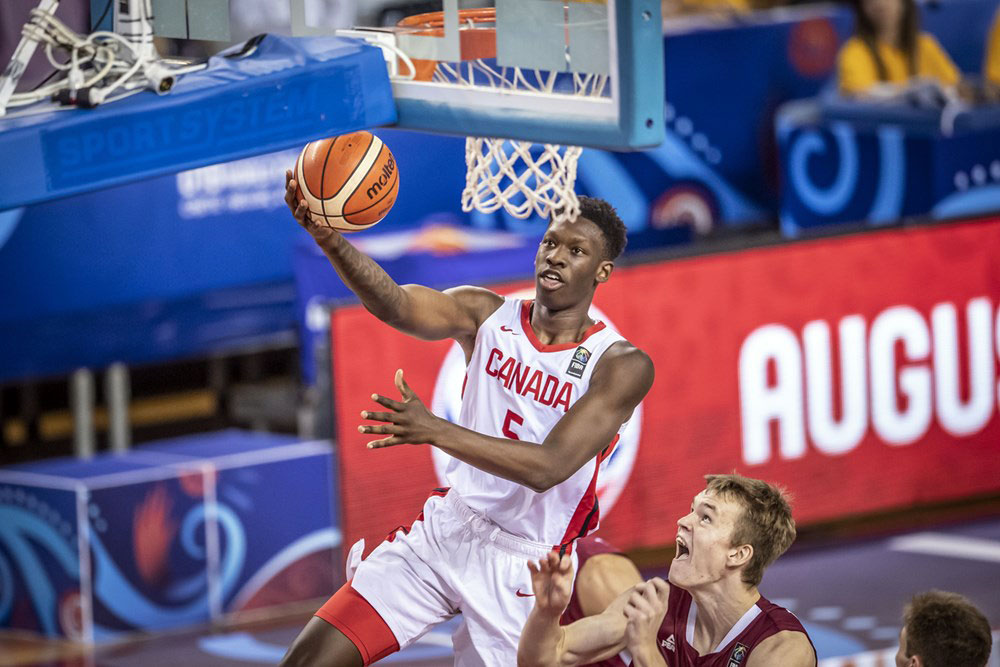 Canada’s Junior Men’s National Team rebounded from a stunning one-point loss to Mali to defeat Latvia 78-76 and reach the Round of 16 at the 2019 FIBA U19 World Cup.

Head coach Dan Vanhooren decided to shake-up the starting-up — opting to insert Joel Brown at the point guard position and more versatility in the front-court with Tyrese Samuel.

The decision paid dividends immediately as Tyrese Samuel (Montreal, Que) dominated the first-half with an impressive 13 points, 6 rebounds, 3 steals and 2 assists to put Canada a head 36-29 at half-time.

Samuel continued to dominate in the second-half and finished with massive double-double with 22 points, a tournament-high 17 rebounds, 5 steals and 3 assists.

Charles Bediako also came-up big for Canada with 19 points, 12 rebounds and 2 assists in 19 minutes off the bench.

Latvia’s Arthurs Kurucs poured in 22 points, added 7 assists and 6 rebounds on 4-of-11 from downtown. The Euro-zone qualifiers knocked-down 13-of-43 triples to stay in the game while Canada struggled, connecting on only 5-of-18 from downtown.

Setting up for Canada vs. USA.

Canada (2-1) finished first in a tight group B that featured Australia (2-1) and Mali (2-1) and had to be decided using FIBA’s complex tie-breaker format. The Aussies beat Mali 82-79 in the dying seconds of the game to claim the second-spot with Mali taking third and Latvia (0-3) in fourth-place.

The Canadian’s will play fourth-place group A finishers Senegal (0-3) in the round of 16.

The first-place group B finish is crucial as it puts Canada on the opposite bracket of the USA, setting up for a potential finals meeting between the top two nations at FIBA U19 level.