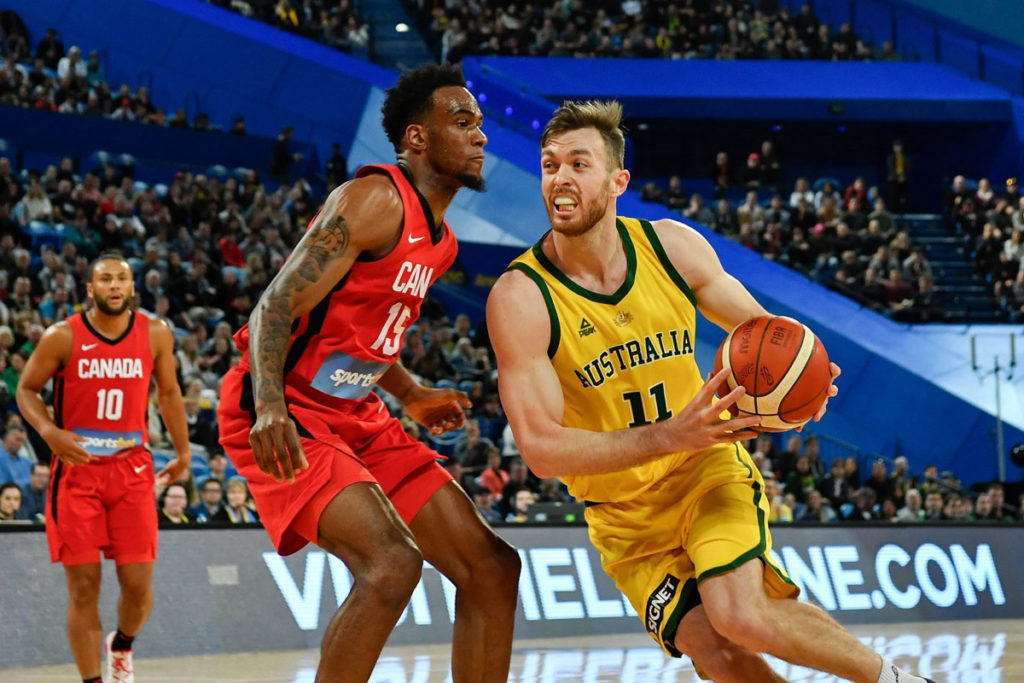 Canada started off slow as Australia made their defensive adjustments, after blowing out the Aussies 90-70 a day earlier by limiting the Canadians pick and roll opportunities and forcing Canada to shoot by going under screens. The Canadian’s trailed 13-6 early, but rallied with a 12-5 run to close the first-quarter with a 18-17 lead on a step-back jumper from Oshae Brissett.

Using a combination of U Sports basketball guards Canada opened up the second-quarter with back-to-back triples from Aaron Best and Kaza Kajami-Keane for a 26-19 lead with 7:27 to play. Australia responded with a 9-0 run to re-take the lead before Andrew Nembhard put a halt to the run with a easy lay-up. Khem Birch dropped in an inside basket to put Canada up 33-30 at half-time after a low-scoring 20 minutes.

The action picked-up in the third-quarter as both teams shot the ball extremely well, combining for a total of 56 points. Melvin Ejim scored Canada’s first five points and Khem Birch dominated the paint to give Team Canada a 48-38 advantage with 5:42 to play. Australia quickly found their stroke knocking down three-straight triples in less than minute – on their way to six in the quarter and a slim 60-59 lead after the third-quarter.

Canada’s offense dried-up in the fourth-quarter with just two points scored at the mid-way point as they settled for long jumpers and unnecessary three-pointers to quickly find themselves down 70-61 with 4:43 to play in the game.

Khem Birch sparked a late Canadian run, scoring 6 straight points to cut the lead down to 3 points at 70-67 with 3:30 to play and finished with a game-high 18 points, 4 rebounds, 2 steals. Oshae Brissett added 14 points and 5 rebounds. Kaza Kajami-Keane rounded out Canada’s double-figure scores with 11 points, 3 rebounds and 3 assists and Melvin Ejim contributed with 9 points and 7 rebounds.

The Boomers knocked down 12-31 (38%) from downtown, after shooting just 3-for-13 in the first-half. The Canadians were a miserable 7-of-25 (28%) from the outside and struggled with turnovers with 16. The Aussies grabbed 12 offensive boards and won the battle of the glass with a 43-40 edge.

“We showed a lot of character these last two games, we had some guys not playing, but it was the same on their side. We played really tough, this is a great Australian team, they got a lot of great players and they are going to do very well. But I thought we showed promised and have the ability to compete no matter who we put on the floor.” – added Melvin Ejim.

Australia was led by Jock Landale with 13 points and 9 rebounds. Jonah Bolden added 12 points, 5 rebounds and 2 assists and Chris Goulding with 10 points and 3 rebounds on 3-of -7 triples.

Both teams held back schemes, familiarized and acquainted themselves with each other and now have game footage in preparation for a crucial 2019 FIBA World Cup opening clash between the teams in less than two weeks in China.

Team Canada (2-2) will continue its FIBA World Cup preparations with a two-game series against New Zealand in Sydney, Australia on Tuesday August 20 and Wednesday August 21st.

Must Read:
Andrew Wiggins: On the Low