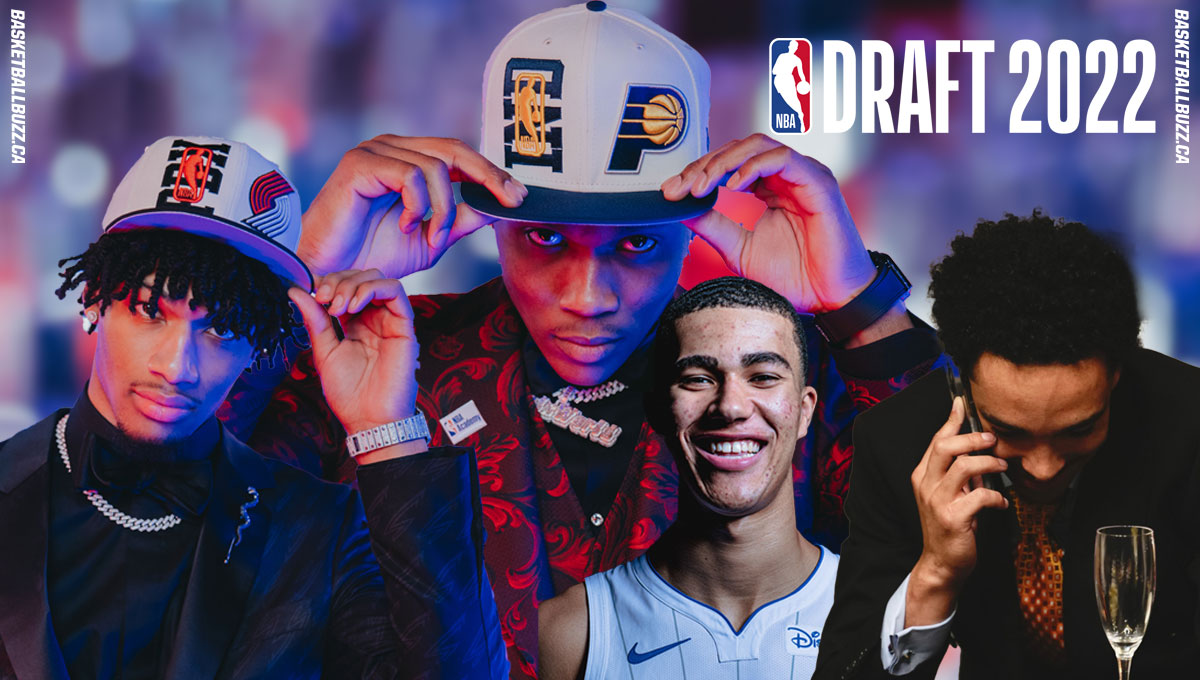 “Back to back like I’m on the cover of Lethal Weapon. Back to back, like I’m Jordan ’96, ’97.” versed Canadian Grammy award-winning artist Drake, in his now famous 2015 freestyle battle with North Philly’s Meek Mill.

Seven years later, Drizzy might just have to re-make the summer classic to include Bennedict Mathurin, Shaedon Sharpe, Andrew Nembhard and Caleb Houstan.

Buoyed by a record amount of underclassmen tossing their names into the process, the 2022 NBA Draft always had the potential to once again deliver lottery pick fireworks for Canadian basketball enthusiasts and the fastest-growing basketball nation in the world.

The night didn’t disappoint, as expected two Canadians where selected in the top ten picks for just the second time.

After years of dreaming and months of preparation, the buzz ultimately fell upon the top four Canadians in the 2021-22 NCAA season.

The Indiana Pacers wasted no time using their sixth pick to make Bennedict Mathurin the highest Canadian basketball player ever to be selected from the city of Montreal.

The journey from unknown prospect to Canada’s fifth-highest all-time (Bennett, Wiggins, Barrett, Houbregs, Thompson) NBA Draft selection is not only a testament to Mathruin’s self believe, but also an important reminder of just how quickly your life can turn around if you are willing to leave it all on the line.

Dripping with fashion, like Montreal’s famed St. Catherine street, Mathruin’s, custom-made floral-patterned red suit, with pictures of his closest ones stitched inside, easily won the night as well.

Cherishing the moment with his mother and sister, from the red carpet to the green room inside the Barclays Center in Brooklyn, New York. The 20-year-old from Montreal-North fought back the tears and stayed fresh like a spray of AXE as he walked up to the podium to shake commissioner Adam Silver’s hand.

Also on hand to help welcome his ‘little brother’ into the league was Oklahoma City Thunder guard Luguentz Dort. The two friends grew up playing basketball in the same Montreal neighbourhood. Having both realized their dreams and with all eyes on Montreal basketball like a Tupac single, the little brother can’t wait to show the big brother a few tricks in the world’s top basketball league.

In Mathruin, the Pacers are getting an uber confident two-way guard that checks all the boxes on both sides of the floor and is ready to contribute right away. Pairing their latest prized Canadian acquisition with talented and recently acquired point guard Tyrese Haliburton was a primary focus for the Pacers coaching staff.

The 2022 NBA Draft will go down as one of the deepest and most talented ones in recent memory. The fact that a player of Shaedon Sharpe’s calibre fell to the seventh pick speaks volumes of the incoming class.

The probability of Shaedon Sharpe and Damian Lillard setting up a dynamic duo in Rose City was always an intriguing possibility. There was no mystery about the overall package that a player of Sharpe’s calibre brings to an NBA franchise.

A combination of breathtaking athleticism and shot making ability, the six-foot-six Canadian guard is expected to contribute early and often to a retooled Portland Trail Blazers team.

Projected as a late second-round, Andrew Nembhard (Aurora, Ont.) quickly changed the narrative. A stellar showing at the 2022 NBA Combine showcase in Chicago and nearly flawless workouts with both the Indiana Pacers and the hometown Toronto Raptors, significantly increased the Canadian’s draft stock.

“The word that stands out for me is feel, he just got an amazing feel for the game. I love point guards, I’ve had the real privilege of working w/ some great, great point guards, I mean, Jason Kidd we won a championship.” described Pacers head coach Rick Carlisle on Andrew Nembhard’s impact.

The NBA Draft has changed. It’s no longer about immediate needs. Identifying potential team fitting talent and allowing it time to develop over is now a major part of the long term winning strategy. Think Golden State Warriors!

Awarded their fourth first overall pick in franchise history, the Orlando Magic made no mistake in selecting Paolo Banchero, The Duke of the 2022 NBA Draft. In need of outside shooting, and continuing their recent trend of drafting Michigan Wolverines players, the Magic quickly locked-up Canadian sharpshooter Caleb Houstan with their second round pick.

Caleb Houstan’s time in the sunshine state of Florida will continue after a one and done season with the Michigan Wolverines in Ann Arbour. The former McDonald’s high school All-American and national champion at Montverde Academy was given a guaranteed that he would be drafted.