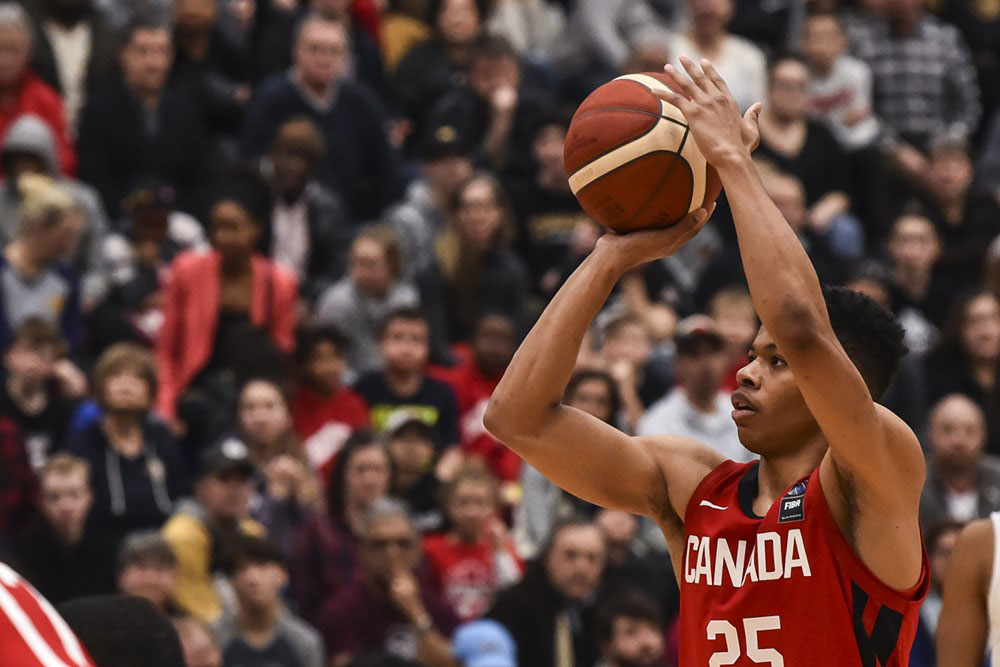 Fresh off leading his German league club to a historic season and playoff run, Trae Bell-Haynes didn’t have to wait long to figure out his next challenge.

Last week, the 25-year-old point guard was one of 21 players invited to a tryout camp as Canada’s senior men’s basketball team prepares for a last-chance Olympic qualifying tournament later this month in Victoria, B.C.

Bell-Haynes, who was named best offensive player while starring for Crailsheim Merlins in the Basketball Bundesliga, has a clear goal for when he joins a group mainly consisting of NBA players in Tampa, Fla., in mid-June to compete for a spot on Canada’s roster.

“The only thing on my mind is making the team and while I’m there doing what I do and being myself and doing whatever I can to help the team,” said Bell-Haynes. “Obviously there is a big goal and every time I’ve been with Canada, I’ve tried to kind of put my ego to the side.

“When I go there, I’m extremely honoured to be representing the country. It’s just about finding a way to help the team win in any way possible.”

According to Canada Basketball assistant general manager Michael Meeks, the door is open for Bell-Haynes to earn a spot on a roster that ultimately hopes to compete at the Tokyo Games.

“This year with an injury to Jamal Murray, things opened up at that position and [Trae] had a pretty stellar year,” Meeks said. “People are saying it’s a breakout year for Trae. I guess professionally, it’s probably his best season in the most competitive league that he’s played in thus far.

“But anybody who knows Trae, that’s Trae. When he was in college, he led an underdog Vermont program every year that he played. He’s been that guy on teams that he’s played for. I’m just glad he’s getting an opportunity to get his name mentioned with some of the best players in our country. He’s more than deserved it.”Michael Meeks – Canada Basketball

As Canada sits on what Meeks refers to as a “volcano of talent,” it is clear the men’s program has high regard for Bell-Haynes.

“This is the national team. To be successful at this level, you can’t go into those camps thinking you don’t have a shot,” said Meeks.

“You’ve been invited. Once you accept it, you know what the stakes are. You’ve got to just now go and do your thing and you’re competing and there’s other athletes competing. The mere fact that his name was on the list and he was called, he should know he has a shot at it.”

Bell-Haynes mentions that his closest friend at the tryout camp will be Melvin Ejim. While Bell-Haynes isn’t as familiar with the NBA players in Canada’s program, he says there is no choice but to form a bond around the common goal of qualifying.

“When you go and you join a team, especially for something like this, friendships kind of form pretty quickly because we’re all there to do a job and we know how important this is for everyone that’s going to be around,” says Bell-Haynes.

“So make friends quickly and just build the chemistry as quickly as we can.”

Bell-Haynes has also signed on for a third season with the Niagara River Lions of the Canadian Elite Basketball League, but the team is fully understanding of the opportunity in front of him.

“We are hopeful that he makes the final roster,” says River Lions vice president of operations Michelle Biskup. “I think he has a really good shot at it, given the amazing season he had in Germany. So it’s bittersweet because we’d love to have him here, but we’re excited to watch his journey too because for him as a basketball player representing your country is everything.

“We’ll miss him if he’s not able to be here – but if he is, that’s great. We’re so glad that he has the opportunity to attend their training camp.”