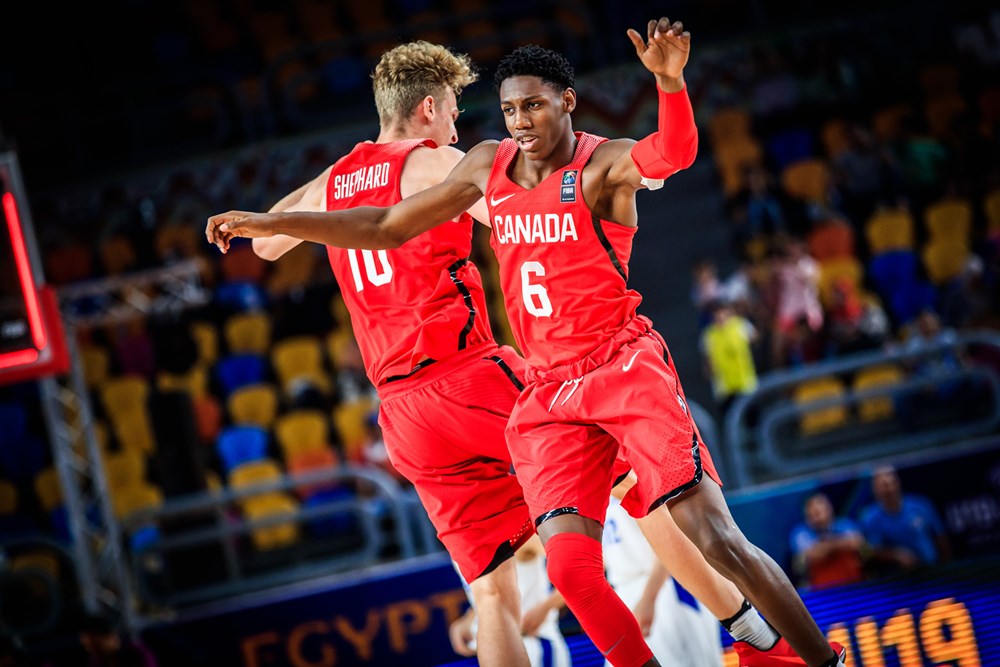 17-year old Rowan Barrett Jr., the number one ranked player in the class of 2019 kicked off the much anticipated quarter-finals against the European Champs with a two-hand dunk, setting the tone for the Canadians and quick 7-0 start. Barrett Jr. finished with a game-high 27 points, five rebounds and four assists while Abu Kigab racked-up his second-straight double-double 17 points and 15 rebounds and six assists.

6’11” Canadian forward Grant Shephard (Kelowna, BC) rounded out Canada’s double-digits scores with 12 points and five rebounds on 4-of-5 shooting.

Canada played without the services of starting point guard Lindell Wigginton who was out due to a concern of concussion symptoms. Point-guard duties were shared by 5’9″ point guard Jordan Henry (Toronto, ON/Ryerson Rams/Usports) who started in his place, finishing with four points and five assists in 29 minutes while Noah Kirkwood (Ottawa, ON) contributed four points, three assists and two steals.

“What an incredibly proud moment for this group and this team,” head coach Roy Rana said. “To make history at the U19 level is sweet for us but we’re not going to settle. We’re focused on getting ready for the next challenge.”

The European champs got strong performance from 6’10” Killian Tillie (Gonzaga Bulldogs) with monster a double-double of 22 points and 16 rebounds on 10/16 shooting. Unfortunately France shot a miserable 9-of-22 (40.9%) from the foul-line and 26/71 from the field.

Canada 4-1 will take on rivals United States of America (5-0) in the first semi-final while Italy and Spain will battle it out in the other for the rights to advance to the Gold Medal game.