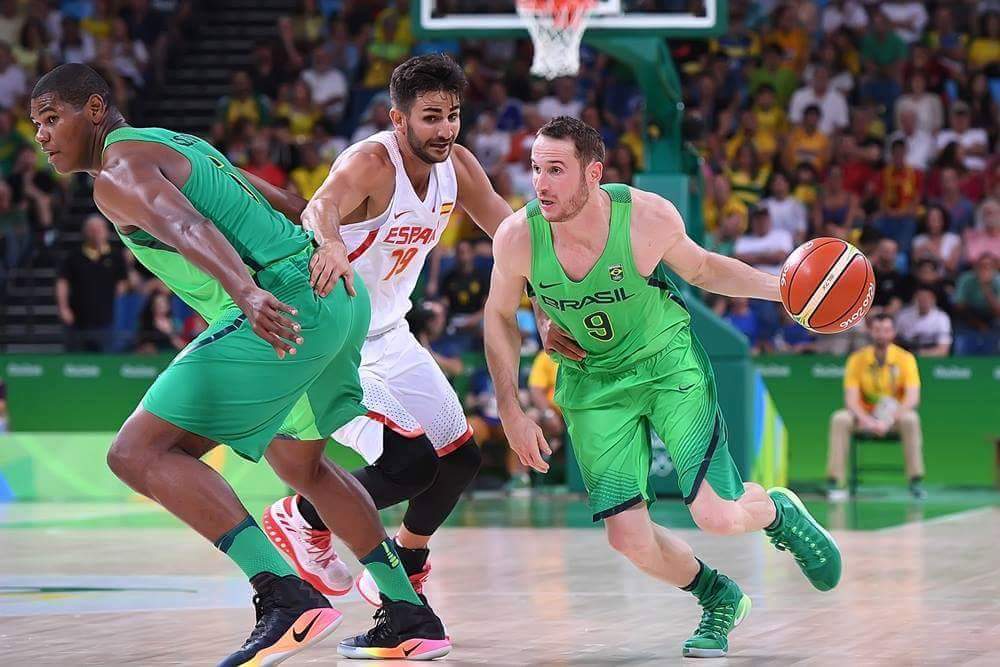 All this basketball out of season. We must be dreaming. Right now between your T.V., tablet and smartphone you need more screens than ‘Minority Report’ to keep up with all this Olympic Games action.

And as expected Team USA (men and women) are making South America their own in Rio 2016. Even if nations like the Peoples Republic of China and Venezeula are looking competitive, like playing NBA 2K for the first time they just can’t keep it close. It’s like all the sliders are set to 100, even without champion LeBron and MVP Curry. In the first day of the five rings games the U.S. beat China by their biggest margin ever since the M.J. Dream Team of Barcelona ’92 and in their first week, veteran leader and multiple, consecutive Olympian statesman Carmelo Anthony just passed his Jordan Brand boss Michael in total points during these four yearly contests.

Many people believe the only country in this worldwide NBA heavy games that could possibly stop the U.S. charge is the big name laden Spain. But so far the European nation is 2 and nothing…and not in the way they’d like. Maybe it’s the absence of Memphis Grizzlies All-Star Marc Gasol upfront. Maybe the fact that his paint brother and newly acquired San Antonio Spur Pau is still a bag of nerves after freezing his sperm before travelling to Rio De Janerio…a place many sports stars like golfers Jordan Speith and Rory MclRoy refuse to travel to because of the deadly Zika virus. Or maybe it’s the fact that the Spanish teams coaches play writing dry erase looked more like a kids Etch a Sketch. Maybe that’s what shook them up.

Despite starting the game and last nights shooting with an airball, Pau Gasol was almost perfect in the post (13 points) with his inside post play. But on a DeAndre Jordan night from the line (5-12) he missed two clutch freebies from the line, leading Brazil to take a 65-64 lead with just a shot clock remaining in the game…and that was all the Olympian Basketball Gods wrote in stone.

Spain may have the likes of Pau, his former Spanish Bull teammate Nikola Mirotic, Minnesota Timberwolf Ricky Rubio, Rudy Fernandez and Roudriguez but so far they have made little splash in the beaches of Rio like the Golden State Warrior brother who has been more “Clay” Thompson going 1 for 11 from the field so far on the floor. It’s still early days however and until these guys see red they are still one of the favourites in fanfare and how they should fare.

Recently re-signed Los Angeles Laker-who used to play for Barcelona’s basketball club like Laker legend Pau-Marcelo Huertas lead Brazil’s court carnival with a parade of 11 points, 7 assists and 4 rebounds. Dominant in a game which saw him match-up with Spains new fellow Laker reserve Jose Calderon. To think these guys have to play behind last years rookie and sophompre D’Angelo Russell and Jordan Clarkson in Hollywood. It looks like the post-Kobe changing of the guard in California is in safe hands.

Huertas put the hurt on Spain alongside the NBA muscle of Nene and the underrated, quick-jabbing, euro-step pace setter Leonardo Barbosa. So much so that the flash of Ricky Rubio was reduced to just 3 points and one hell of a De Janeiro tan. If Spain want to even make it to next weeks quarters than they have to pull something out the cape against Nigeria. Whereas host nation Brazil who now own more than just the tournaments hottest, lime neon highlighting jerseys look to continue this streak against Croatia.

Must Read:
The Rings No Longer The Thing For Some Olympians Going For Gold

Holding the torch its time for them to keep the flame lit.