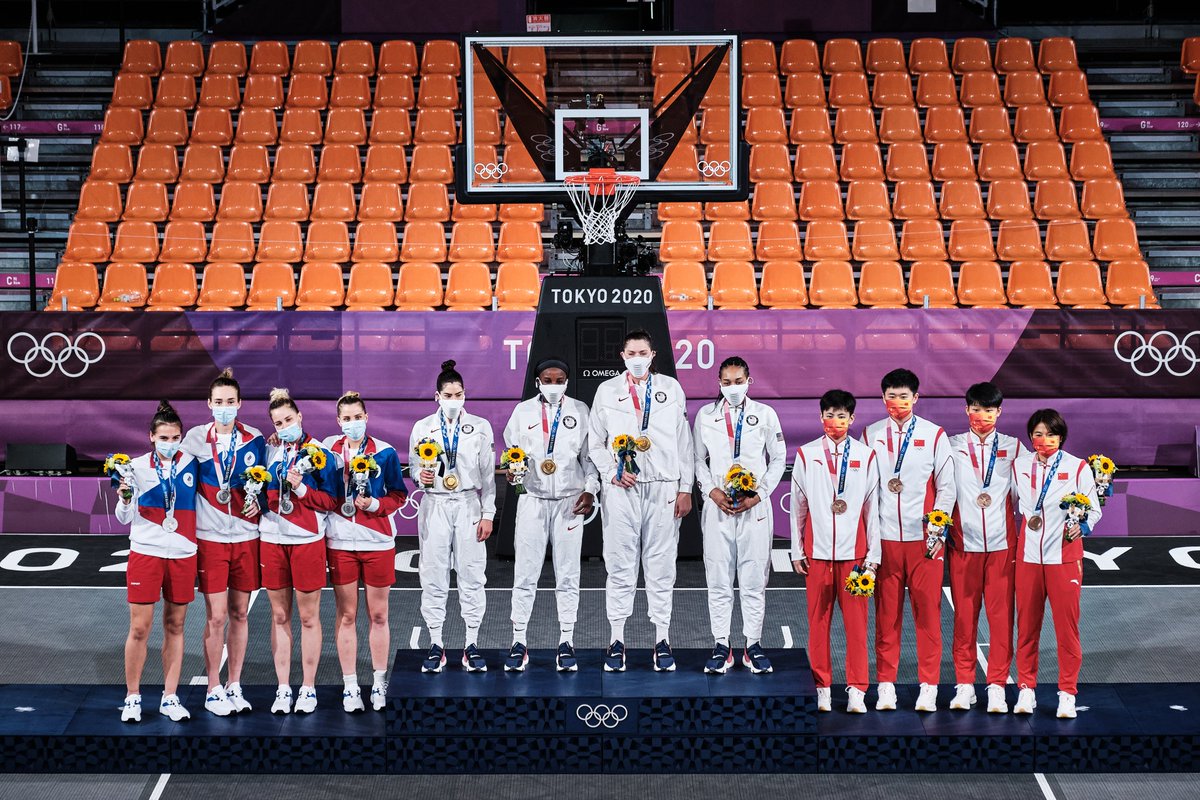 BasketballBuzz is in Tokyo, Japan for the 2020 Olympics this summer and last night hoops made history in the neon and traditional host nations capital city.

Bursting onto the scene like skateboarding, the 3×3 basketball tournament already made its mark from the first whistle. Japan knows all about this game too with more than valiant showings from both their men and women’s teams. The men made it to the quarter-finals before a heartbreaking loss and the women upset the previous unbeatable US in the pools.

When it came to going for gold though, it was all a dream like 1992. Even if the US men failed to qualify for this grand stage, Team USA still took the tournaments inaugural gold before the men’s final got down to it.

Now just like Sue Bird, Diana Taurasi and company showing Kevin Durant and the rest of the big name Team USA 5-on-5 still finding their feet how its done, these four women have set the standard to come.

You just know by Paris 2024 the men won’t miss the next one.

Plenty of star power and underground hoops hotbed talent was on display on the concrete last night. It wasn’t just the humid weather of a sweltering Tokyo that was making everything hot, even in the evening.

Shout-out to the Seattle Storm’s Katie Lou Samuel’s on who had to sit out the event due to COVID-19 complications. We wish her well and good health.

Their almost flawless record (save Japan) best near everybody, including France and Russia twice. In the gold medal game against the ROC they survived a late rally to take the contest 18-15.

Now you don’t need to imagine what it would be like if the likes of Russell Westbrook, Trae Young, Devin Booker or anyone else your fantasy basketball minds can conjure-up played in Paris. You just witnessed real A-list balling talent on a street level.

First to 21 or whoever comes out on top after ten minutes. It all sounds like a cakewalk, but 3×3 basketball actually makes for one of the most exciting and thrilling events of entertainment. Not just as a spin-off from the ball on the fingertip game of basketball, but an actual individual Olympic sport in itself.

If table tennis is an actual one and not a division of tennis, then why not 3×3?

Get your teeth into that like the signature medal biting celebration. It’s not a chocolate coin. This is gold certified.

If you thought the US surviving a surging ROC made for great TV now we can’t see the games in person quarantined outside their bubble in Tokyo, you hadn’t seen anything yet.

The silver lining Russian Olympic Committee (ROC) faced even more heartbreak as Latvia beat them 21-18 in the Finals after Latvian superstar Karlis Lasmanis clutched a historic shot that showed this game is still as potent as its big brother, even if it is only half of 94 feet.

Clipping Russia’s wings with a jumper from the wing, you could see the pure, personified passion in Lasmanis’ eyes as he downed the winning shot, hit the deck and was piled on by all his teammates.

Sharpshooter Edgars Krumins had to pull up out of the game with an ankle injury, but was still left slapping the hard, hot concrete in jubilant celebration that didn’t even need champagne.

But you can bet it was on ice in the locker room.

Latvian basketball is back.

Or maybe it never left like those still ignorantly calling the European game “soft”. Remember, stereotypes act for the weak. It’s plain to see that the continent is dominating this FIBA games, no flopping.

Down to the wire with the ROC in both finals games, this new 3×3 event was as explosive as dynamite.

What a way to make history AND legacy for a brand new game that has just changed the Olympics.

Let’s carry the torch to France.