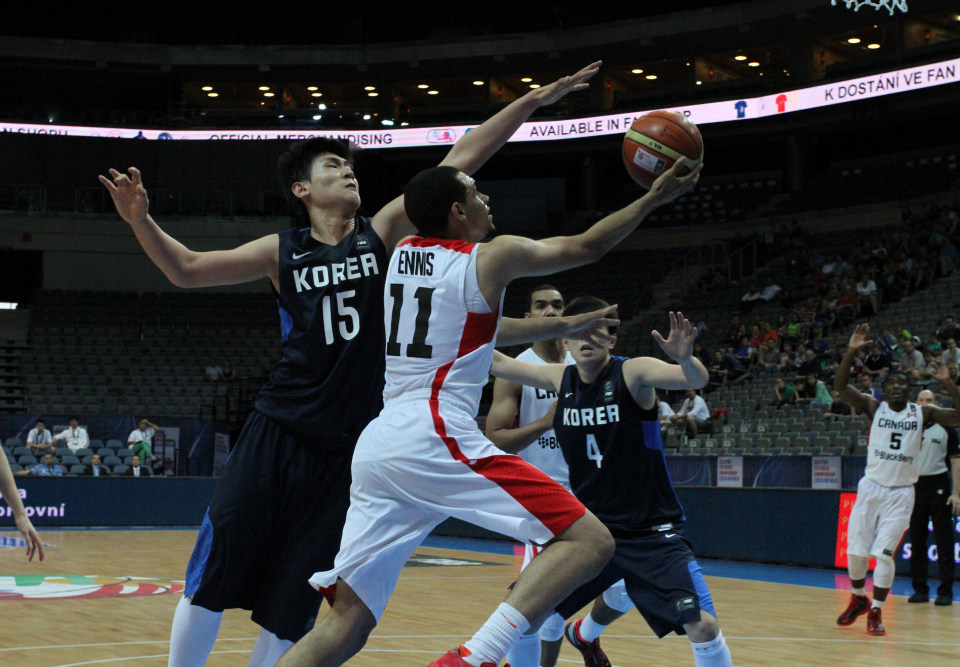 Prague, CZ – (BasketballBuzz) – Facing a must win situation Canada’s Junior Men’s National Team rebounded from two tough defeats to beat Korea 95-73 and advance to the Eighth Final Round at the 2013 FIBA U19 World Championships.

Ennis was unstoppable the entire game going 11-of-16 from floor on array of drives to the basket.

Trey Lyles (Saskatoon, SK) produced his second straight double-double of the tournament with 21 points and 11 and was key reason why the Canadians scored 56 points in the paint and out rebounded Korea 50-22.

Lyles once again showed his versatility by connecting on a variety of shots, post up moves and his dribbling ability by grabbing the rebound on the defensive end and going behind the back not once  but twice followed by a two-hand facial on Korea’s center Intae Park.

Other players in double-figures included Duane Notice who also finished with double-double of 10 points and 11 rebounds despite shooting only 3-of-15.

Xavier Rathan-Mayes came of the bench and shot the ball much better than his two previous outings and added 11 points and five rebounds and went 2-of-4 from the outside. Rathan-Mayes is 4-of-21 from three-pointers through three-games.

16-year old Chris Egi (Toronto, ON) also had his best effort of the World showcase by contributing nicely with 8 points and 7 rebounds, 4 on the offensive. Egi provide much needed energy when Canada made its decisive run.

The game was evenly played right up until the fourth-quarter. With Canada leading 65-63 with 8:49 left and staring at the possibility of an early exit Head Coach Roy Rana looked to Ennis who almost outscored the Koreans by pouring 11 of his 27 points in the quarter to outscore the Koreans 28-14.

Must Read:
Canadian's make their mark at 2019 NBA Summer League

All three-teams will now advance to Eighth Final Round where where Canada will be placed in Group E alongside Spain, Croatia and the top three teams from Group B which features Lithuania (2-0), Argentina (1-1) and host nation Iran (1-2).

Canada will need to finish in the Top Four of Group E to advance to Quarter-Finals.