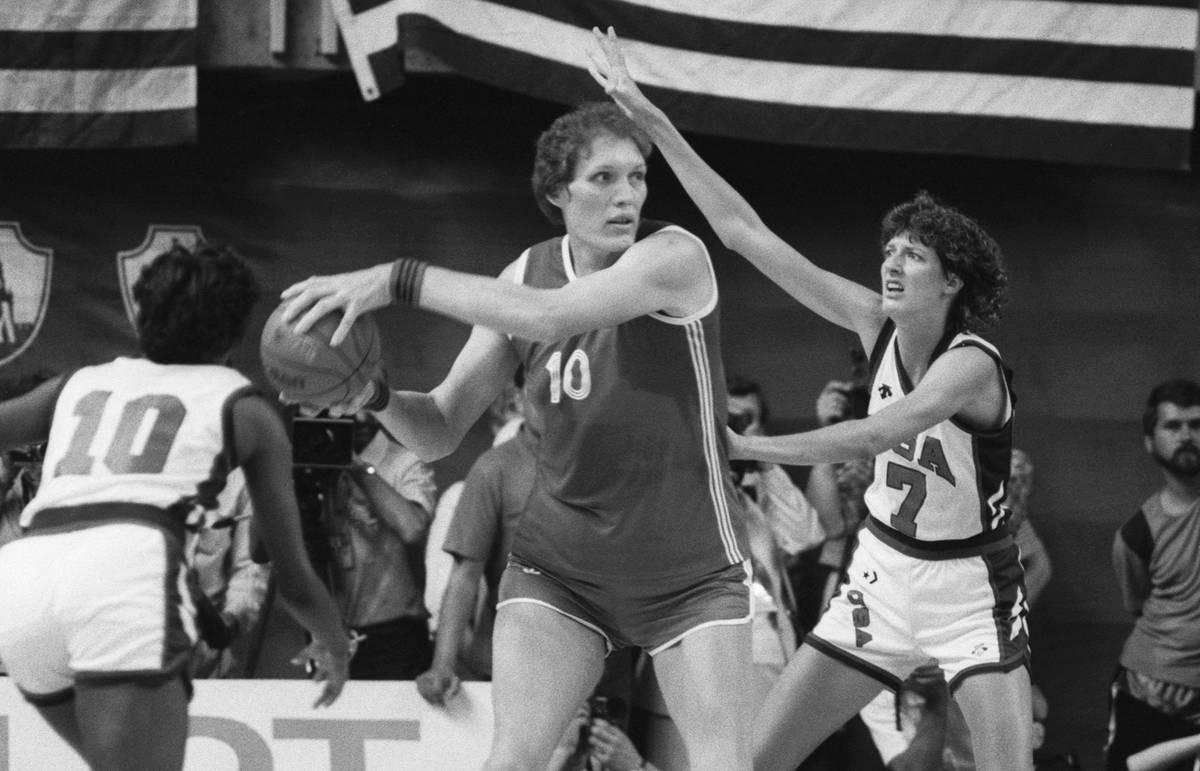 Unlike “Who is the GOAT in men’s basketball?” where the conversation usually has Jordan out front followed by LeBron and then in no particular order,  Wilt, Kareem and Boston Celtics’ Russell…there is no clear-cut answer for the women’s debate.

Unfortunately, these discussions sometimes turn to arguments that may have been influenced by the giant marketing machines called the NBA and WNBA.

One would think that NBA superstars did not exist before Magic-Bird arrived or that there were no women playing high caliber pro hoops prior to the WNBA.

Many fans have been brainwashed by the system in that the best players are…or let’s say…have to be from the United States of America.

In reality, that myth started to fade a few decades ago.

Instead, let’s have an open mind and be willing to think outside of the box with a Small Ball Big World mentality.

So, here comes the can opener.

The GOAT in women’s basketball is….

Who the heck is Uljana Semjonova?

The stats speak for themselves.

During her 18-year international career, starting as a 16 year-old in 1968, it is stated on nearly every website that she never lost a single game when playing in major international competition. More on that later.

She has scored more than 15,000 points which may be a record for women’s hoops.

At the 1976 Olympics, with women’s hoops making their debut, Semjonova averaged a point-per-minute with 19.4 points per game while playing 97 minutes in five games.

She shot an incredible 46-56 from the field and had 62 rebounds.

Her team was so powerful that she usually only played half the game.

As a GOAT is expected to do….she always came up big in championship gold medal games.

But it is her early performances against Team USA that stands out and sets her apart.

The 1976 Montreal Olympics gold medal game against the USA, which featured several future Hall of Famers including Ann Meyers, Nancy Lieberman and Lusia Harris-Stewart, Semjonova scored 32 points 19 rebounds in the first half shooting 16-19.

Yes you read it right. The first half against a USA Dream Team.

She sat out the second half as Russia cruised to a 112-77 victory.

The 6-foot-3 Harris said of Semjonova: “She is so much taller, so much bigger, and she didn’t jump. All she had to do was extend her arms. And I mean, I’m only 6-3. The thing I figured out is that I would beat her down the court because she wasn’t that fast.”

Even the biggest NBA giants tend to be just average.

From these eight players, the best season stats were average at best: Bradley was the best scorer  at 14.6 ppg for the Dallas Mavericks in 1996-97 beating out Muresan at 14.5 ppg for Washington in 1995-96.

True, string bean Bol was impressive when leading the league in blocks at 4.96 per game for the Washington Bullets in 1985-86  but he managed only 3.7 ppg and 6.0 rebounds per game that season.

Only one player 7-5 or taller has dominated in the NBA and that was Yao Ming who had his No. 11 retired by the Houston Rockets.

Let’s get back to the GOAT of women’s basketball Uljana Semjonova.

At the 1980 Olympics, which were boycotted by the USA and 65 other countries because of the Soviet–Afghan War, Semjonova averaged 21.8 ppg playing 134 minutes in 6 games while shooting 57-79  from the field. She windexed the boards for 75 rebounds and also had 17 blocks.

Three years later at the 1983 World Championships against Team USA, once again playing limited minutes, Semjonova dropped 31 points in an 85-84 round robin victory and then 31 points in the gold medal game 84-82 decision in favour of the Russians.

Russia and Team USA would have to wait until 1986 for a rematch at the Goodwill Games in Russia.

Semjonova was only five and six years old at that time.

Druzhba Sports Center had all 7,000 seats filled for the historic rematch.

Now at age 34, plagued with injuries limiting her mobility, Semjonova had difficulty keeping up with the fast pace.

In 17 minutes Semjonova only managed 4 points and no rebounds and actually had one of her shots blocked by 6-foot-8 Anne Donovan.

Today’s pundits would crow that Semjonova was too slow and could not keep up with today’s game.

Is the game really that much faster? Would modern training not improve her conditioning?

During her career Semjonova was the most dominant women’s basketball player in the world for more than 10 years. No other woman can lay claim to such status.

P.S. Had the opportunity to watch play against Canada in 1970s’ at Winnipeg Arena. Also interviewed  7-7 Gheorghe Mureșan and 7-6 Shawn Bradley and most interesting thing was not their height but when shaking their hands mine would literally disappear.