The days of playing for free as an amateur athlete are nearly over for unsigned, class of 2023 forward Leonard Miller.

The six-foot-eleven stretch forward with a seven-foot-two wingspan scored 11 points on 4-of-9 field goal attempts and nailed 2-of-4 three-pointers as Team World fell 102-80 to Team USA at the 2022 Nike Hoop Summit inside the Moda Center in Portland, Oregon.

The 2022 BioSteel All-Canadian and player of the year added five rebounds, two assists and two blocks in 18 minutes.

Playing in his first major international event since the 2019 FIBA U16 Americas, Miller stood out, finishing as one of just three players on Team World to score in double-figures.

Going up against an uber talented USA junior national team, Miller played under control and demonstrated his versatility on both ends of the floor. He finished through contact on a nice defense to offense sequence and was able to get in the lane several times to create for his teammates.

On one particular play, the 18-year-old Canadian, attacked the paint and dished out an off-hand, pinpoint behind the back pass to Jean Montero of the Dominican Republic for a wide open three-pointer.

Overall, it was a great showing for Miller in limited minutes and shots. Despite the scarce opportunities, he did more than enough to continue his upward climb in the class of 2022 rankings and on NBA Draft boards.

Led by veteran Canadian head coach Roy Rana, Team World started off strong, but succumbed to a talented Team USA in the second-half. The former is Eastern Commerce, Ryerson Rams bench boss, has been at the helm of Team World since 2012.

Created in 1995 the Nike Hoop Summit has grown to be one of the premier events in the recruiting calendar. Six-foot-ten Jesse Young (Peterbourgh, Ont.) was the first Canadian to play in the event in 1999.

Since then, over twenty Canadian basketball players have been featured in the game, including, Jevohn Shepherd, Devoe and Cory Joseph, Kyle Wiltjer, Andrew Wiggins, Anthony Bennett, Jamal Murray and RJ Barrett.

Miller, recently cut down his recruiting options to ten teams and his expected to announce his next steps in the coming weeks. 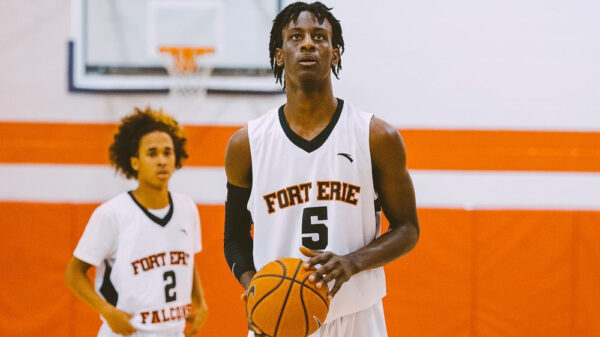