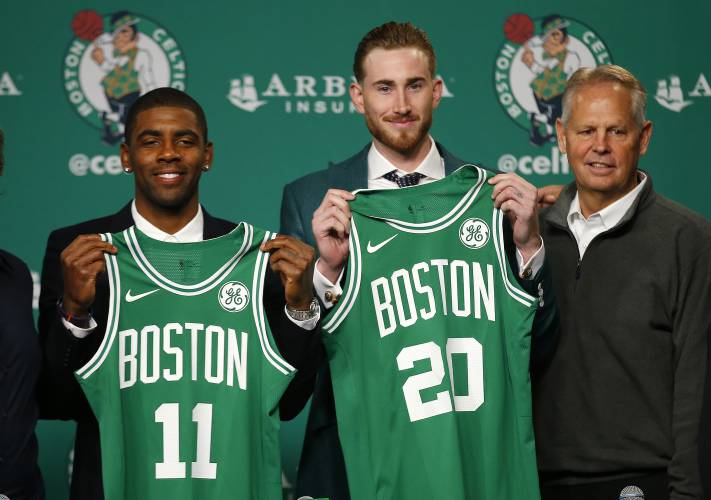 If it aint broke don’t 86 it. And in the six Drake’s Toronto Raptors are still as fresh as passion fruit. The core of DeMar DeRozan, Kyle Lowry and dominant defensive presence Serge Ibaka may be the most underrated big three in the association, but if these Raptors want to roar with Warriors and Kings then they need a T-Rex. Then watch out for them, they’re about to glow

The Nets lost their most efficient player last year and one of the last remaining real centres in the league in Brook Lopez and got the massive contract of Timofey Mozgov in return. Oh and D’Angelo Russell. D-Lo suits this Brooklyn Zoo as well as O.D.B. but if this young, clean guy wants to win and prove everyone in Lonzo/Lavar Lakerland wrong then he needs to show that the ice in his veins runs deeper than a season of ‘Game Of Thrones’. Winter is coming and alongside another former L.A. Laker in Jeremy Lin these former Cali’ kids could see the sun again.

Will ‘Melo stay? Can he really wear the hoodie in game? The former big question mark will infest the Big Apple like worms until Carmelo Anthony probably gets traded. And the only answer is Porzingis. The Knicks already lost Rose. But he was wilting anyway. Instead talent like Michael Beasley and Ramon Sessions have come on board with returning kid Tim Hardaway Jr. But the fact that we need their full names here shows just how their promising careers have panned out. It’s all on Kristaps to make the Garden eden again or at least give Broadway a run to make Carmelo think of staying a few extra dates.

Did you trust the process? Because Joel Embiid has Dario Saric, Nik Stauskas and now hot shooter J.J. Redick believing in him. He and the new Sixers answering the post-Iverson era with The Process are so good they even have top draft big man Jahil Okafor on the bench and Nerlens Noel in Dallas. And now after adding another number one in Markelle Fultz they have a potential Rookie of the Year to add to this dynasty of the future. That is unless last years top pick Ben Simmons, debuting this sophomore season like Embiid did has something to say about that. Look at this teams past right now and see that they are still the future…processing.

Bill and Bird watch. The beans are back in town for the old Irish, most storied NBA franchise, the Boston Celtics. Who would have thought that when former Cavalier champion Kyrie Irving requested a trade from LeBronland that he’d end up here? But Danny Ainge has set forth a new big free of Kyrie, great free agent grab Gordon Hayward and last years big one Al Horford that could rival Paul Pierce, Kevin Garnett and Ray Allen with no b.s. Oh and we haven’t even got started on Jayson Tatum and Jaylen Brown rookies and sophomores. Look out King, history is greater than one reign.

Hate LeBron all you like but he still has Love. Literally and figuratively. And as numero zero Kevin continues to show like fellow UCLA alumni Russell Westbrook that he is anything but that digit he wears like critical doubt, then the greatest player in the league still has help and hope. If you believe in vets like J.R. Smith, Iman Shumpert, Tristan Thompson, Kyle Korver, Channing Frye and Richard Jefferson. This team may be receeding like Jamie Foxx’s Clevelend A. Smith’s hairline, but there won’t be anything funny here come All-Star weekend. They may have lost Deron Williams from their bench, but they in turn have gained Derrick Rose and former Durant practice running mate Jeff Green. Oh and they may have lost Kyrie Irving, but they got back Westbrook dynamite like pocket dynamo Isaiah Thomas AND Jae Crowder in return which no longer makes this trade like for like. The King of the fourth next to the King of the Land. This rebrand as real as those new uniforms and shield holding court leave the Cavs still all in with everything to play for. The Eastern Conference Final may be more exciting than the actual NBA one right now, but the Celtics haven’t dethroned the Cavs yet.

The Butler retired. Rondo never really unpacked his journeyman bags and even hometown hero Wade may be brought out soon. What a difference a season makes hey Hoidberg? At least the Bulls have…erm. Seriously all dunking Zach Lavine, Brook-twin Robin Lopez and the future love of Denzel Valentine has potential to win hearts. But unless Dwyane’s playing the only way these Bulls are at the very least stampeding towards the fourth quarter is if you play their all-time ultimate team on 2K18.

Paul George is officially gone. And no matter how many times they sue the Lakers that won’t change. Wink, wink. But at least before losing him to L.A. star-studded free agency they got Victor Oladipo in return from the Thunder. He joins big names like Turner, Jefferson and Sabonis whose reputations more proceed them. And then of course there’s the enigma Lance Stephenson. The George, Hill, Hibbert and West days holdover who is symbolic of this teams success/struggles. Unless he does more than blow in opponents ears this huffed and puffed house is coming down in smoke as they will choke like Reggie Miller’s symbolic clutched throat. At least the new jerseys are a win.

Motor City is running out of gas. Andre Drummond, Reggie Jackson and Tobias Harris are the big-three group in Motown in need of some backing singers. These Bad Boys are a long way from the 80’s or even the Billups, Hamilton, Prince, Ben and Rasheed Wallace Palace days in Auburn Hills, but this production line can still churn out wins with some assembly required. Detroit needs your attention like ‘Zero Dark Thirty’ director Kathryn Bigelow’s movie.

Giannis Antelokounmpo. Start spelling it right because he will be your next MVP even if he never asked Kobe Bryant for a muse cage challenge. The most versatile, five point on the court player whose like Da Kid, Kevin Garnett on 2049 android upgrade is the kind of player that makes Jabari Parker’s injury or O.J. Mayo’s ban null. Even a big free agent signing like Greg Monroe is nothing in comparison to the one Buck who can steer Kidd’s boys in the right direction. And with Gary Payton’s son under Jason, Delly and Maker this team has the makings of a contender. Sure it’s all Cavs/Celtics right now but one day they’ll fear the deer too.

The Wizards refuse to let anyone else into Washington like their President. But the state of D.C. is in good basketball shape like the spellbinding Mystics as John Wall’s new extension will keep him a foundation in the nations capital longer than those bricks Trump wants to build. And with Beal street, Poland’s post-man Gortat and the maverick Morris still here this team will run for four more behind the cheetah J-Wall who refuses to change his spot. So what they never got hometown hero Kevin Durant! Like Kevin Spacey’s Frank Underwood, this house of guards won’t come down in the east wing anytime soon.

The Heat isn’t off for Miami. As the three ‘W’ South Beach talent of Whiteside, Winslow and Waiters will get their fair share. But with Dragic in reserve this team needs to attract more free agents than Kelly Olynek and keep more of their glue guys than Udonis Haslem sticking around. Especially if they want to return to the Land the King took them before his exile. And in this world we aren’t talking about Wade but a new winner who can avoid the L’s like pedestrians.

Whats going on in the A? A few years ago the Hawks where flying. Now they’ll be clawing for eight seeds like crumbs in the newspaper. They couldn’t cage wayward free agent Dwight Howard who moved down the Southeast conference and haven’t found much in return to shine as bright as his smile or their neon unis. Sure they have Kent Bazemore and Dennis Schroder…but according ESPN he’s the 96th best player in the league. But remember how they rated Kobe? Don’t clip his wings just yet.

Charlotte looks good for more than being the only team in this new Nike league to just have Jordan’s jumpman on their jerseys. Problem or not, big-name big-man Dwight Howard joins. Kemba Walker, M.K.W. (Michael Kidd-Gilchrist), M.C.W. (Michael Carter-Williams), Nicholas Batum and Frank Kaminsky. But the comb needs more honey if its all going to be syrup like Money Michael’s jumper before the greatest of all-times ownership experiement fades away.

Speaking of one of Howard’s former teams. The only thing that fits this Mickey Mouse outfit more is their Disney jersey sponsers. The Magic Kingdom may be frozen, but once this team lets the past go like the cold isn’t bothering then anyway and lets the cool alley-oop connection of Payton and Air Gordon fly then at least basketball will be as fun in Florida as the 90’s golden age days of big Shaq and Lil’Penny. If only!