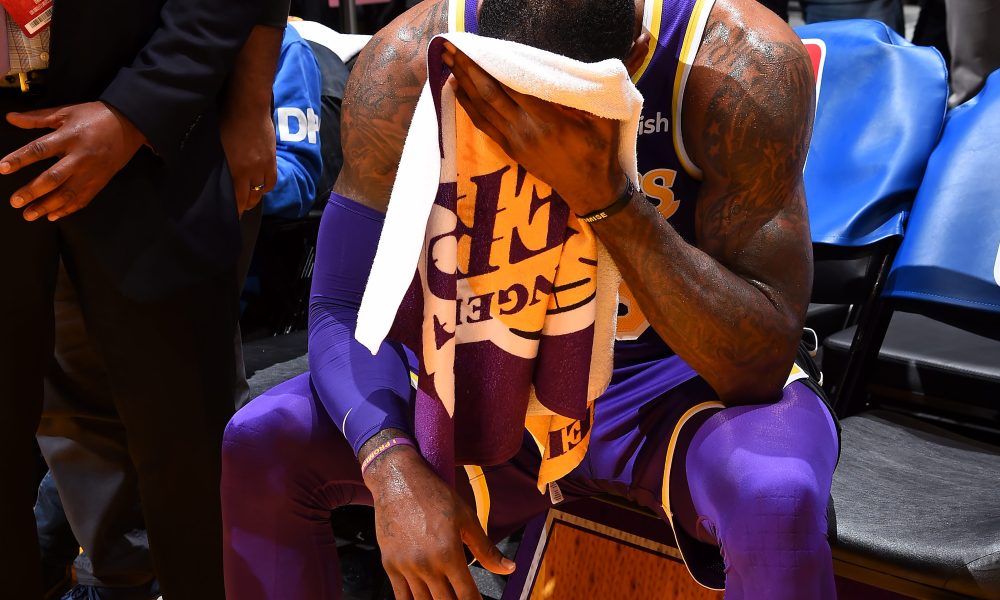 Lakerland has thrown the script out of late. And Angelinos are throwing rocks at the LeBronland throne. Even the ‘Just A Small Town Kid With Big City Dreams’ billboard near STAPLES in downtown L.A. has been taken down. Or at least paint at the mural. But this time with no social media outrage to that, but the man on the wall with his back against it instead. After the rise of purple reign last fall following the Lake Show’s new Prince in the King, they had the best Christmas ever. Even beating the champion Warriors under the tree without him.

But with the New Year came new problems. And after a groin injury to LeBron and time cut for a hurt Lonzo the Lakers well and truly took it in the balls. And then to kick them when they were down there was some guy called Anthony Davis. Almost free and more than willing, but one the Lakers were also willing to give up their whole young core and half their squad and lottery tickets for. And the New Orleans Pelicans said “nah”! Now tell me Magic what does that do to someone’s collective confidence? It parts benches like that hilarious Larry David inserted Photoshop that has us tripping like Shaq courtside in that ‘Curb’ episode. Although if you want to know the truth check Rajon Rondo’s real teammate Instagram post. Well now starring down the barrell of missing the playoffs, let alone the finals for the first time in a decade, having even a team-less Carmelo now passing up and looking at back-to-back series of limited minutes to close out the campaign, some Laker fans want to take LeBron out of the land like the Hollywood sign and send him back to Cleveland.

Must Read:
Welcome To The 2021 NBA All-Star Game In Atlanta

That’s a hell of a lot of pressure for one man to take. Even the King. And you could see it on the bench again. This time taken on his quarterback broad shoulders as he emotionally reached another milestone like Michael. In a bittersweet celebratory moment of emotive reflection, akin to brother Kobe sitting in the Sixers showers with a championship jacket and cap on. Starring into the distance, cradling Larry O’Brien thoughtfully with all the cares in the world’s shoulders. As ‘Bron took it all in with a towel in his face like when he ‘Casino’ talks to agents or his players postgame behind his jersey, all draped in purple and gold.

One that still read Lakers.

Say what you will but the King and all his men have still been serving up numbers (hello Brandon Ingram, future of the franchise. Kyle Kuzma, heart of the city and the Lonzo Angeles Lakers) this season. Its just the King needs help and the kids need more respect. And when that happens this raw but ready roster can find it’s identity like a logo. Time for President Johnson to clutch at Jerry West’s G.M. playbook. Still his spell cast for a crown was a master move like the one L.B.J. has been making all year whether ball rolls or deep threes, make or miss. And those signature dunks and chest thumps. He’s still one of the greatest and best right now. And forget the Twitter troll timelines that become white type noise in a refresh. The history books read different.

They are engraved in champion concrete. Like being the only player in history himself to be both top ten in both points and assists after passing point god Andre Miller last time he broke records. And after spending this season wilting numbers of Goliath Laker legends like the 100 strong Chamberlain, the King passed the greatest of all-time last game. 23 took over another 23 to stare down 24, as L.B.J. had a lucky 13 over M.J. wearing “thank you” Air Jordan III sneakers as he cemented this moment and milestone. That’s as many points as LeBron James needed to pass Michael Jordan for fourth place on the all-time leading scorers list. But he reversed and reflected all that with 31 to now stand at a grand total of 32,311. As now the only ones that stand in this Laker legends way on the historical numbers run is other former purple and gold greats. One over 23 in number 24, Kobe Bryant. The special deliveries of iconic Utah Jazz Mailman, Karl Malone. And of course the sky-hook heights of the number one top of them all, Kareem Abdul-Jabbar.

But the Lakers still caught an L that night against the Denver Nuggets. Not to mention a hilarious Alex Caruso voice over jibe on Twitter from The Ringer. So the King looking to be the lord of the rings again knows that even with playoff mode activated this all doesn’t mean as much as the ultimate W. There’s going to be another long list for James to climb to achieve. But he’s a seasoned vet when it comes to league ladders like that. He’s not got far to go. But it’s still a long road.