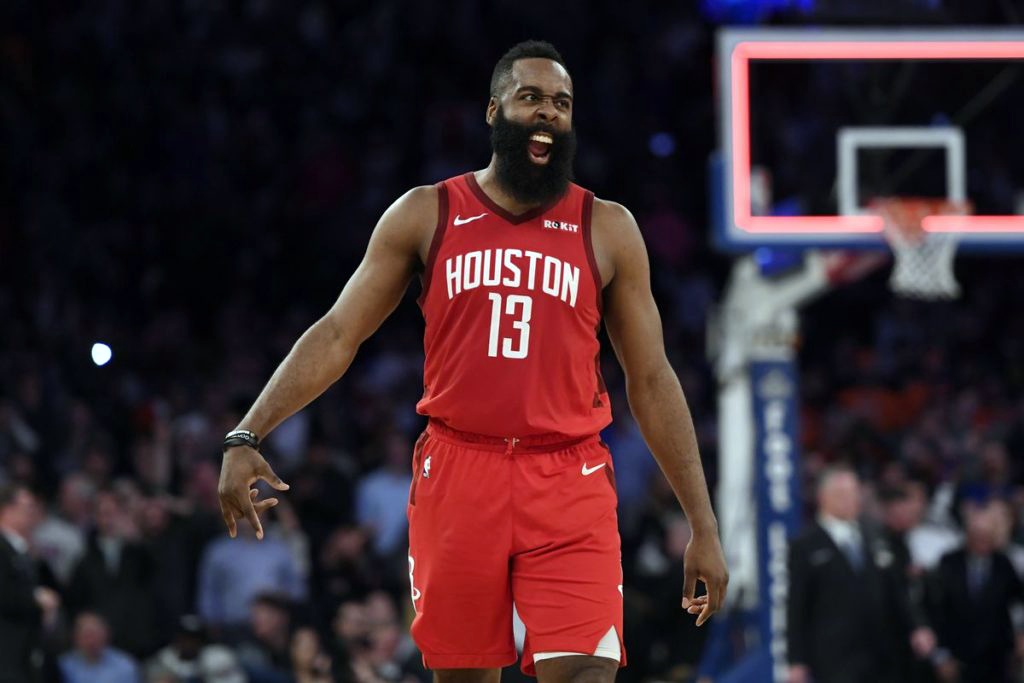 A Mecca 61 For James Harden In The Garden

By the hairs on James Harden’s chinny, chin chin a Rocket took off in the middle of the Big Apple last night.

And it was propelled at something like 61 miles an hour.

On his way to breaking the NBA’s records for most consecutive 30 point games (don’t think he can do it? Talk is cheap. There is no mouth behind James Harden’s beard. There is only another bucket), the new Big Game King James (he takes all the nicknames) tied Kobe Bryant’s record for going all Michael Jordan in New York’s Mecca of the World’s Most Famous Arena, Madison Square Garden.

The bright lights of Times Square may just be a few blocks away, but last night at M.S.G. number 13 was unlucky for them as he shot the lights out. Just like fireworks set off 23 days too late in the city with the ticket for the best show in town on New Year as he shadowed M.J. 23 like a number 24 fadeaway.

But last night on 34th Street the numbers were in the sixties, like those decades made history book that Harden looks to record rewrite in engraved hardwood stone.

Oh yeah and the Rockets won by 4 too. Besting the Knicks 114-110 on the road. But who needs a W when you’re about to get the MVP? Well…probably the guy who needs to play more D. But why be spoil sports when we can celebrate the great? And besides we’re too busy laughing at his too many steps Vine, from music video two-steps to walking through security and through baggage control to a plane on his next road trip.

In the Texas triangle forever pointed by titans we wrote (after Luka Doncic beat what looked like a Harden/Houston win in their Lone State derby in the clutch minutes), that we could write an article about the for sure Rookie Of The Year every week. Well…we should have wrote one about the only man that could beat Dallas’ new European franchise face star to the Most Valuable Player award this season by now. Let alone another story every week. Harden’s just having that good a game, day, week, month, season, year, career.

Must Read:
The Butler Did It All Last Night For Chicago

These fifty shades of Harden have seen him stilt Wilt numbers without a safe word. And now gone with 60 points, twice over he’s hooked sky-high feats that even the goggles of the all-time Kareem Abdul-Jabbar didn’t get to see. And that Laker has with his signature shot scored more points than any other player in the history of the National Basketball Association. Establishment to last nights final horn. Could this guy beat all this before his final moments in a career far from its closing chapter?

We don’t mean to offend the greats, but this could be the greatest offensive player of all-time.

Especially when you look at him at the other end of the floor.

But James Harden is Eurostepping over all of that.

No wonder Carmelo Anthony never got a look in.

CP3 may not need to take another one in his life.

Houston we have history.

A run of 261 unassisted points.

The 21st consecutive game going for 30 or more points. Fourth all-time behind only the Big Dipper, thrice over. A ten year, 61 Garden planted record by the Black Mamba tied up with Harden mentality.

And with their tenth consecutive loss in their own Mecca of New York, New York, the Knicks didn’t think they would got clocked much worse than when this time last week they got chimed out by the Wizards in the Big Ben Smoke, on the road in NBA London losing to a last second, buzzer beating goaltend on a guy named…Bryant.

No wonder Coach Fizdale had enough and “decided” to leave for the M.S.G. locker rooms early as his team fizzled out before the red neon around the backboards backlight.

And now taking over Warrior legend Rick Barry for most 50 point games in league history, like he wish he could step past the Golden State of Steph Curry and former Oklahoma City Thunder teammate Kevin Durant, Harden’s 14 are chasing legendary Laker Elgin Baylor’s in stone 17. Then after that it just comes down to a big-three. Kobe, Jordan (who Harden now joins with more than 5 for most 50 point games in a season campaign) and of course the century Wilt Chamberlain’s 118.

Must Read:
This Summer's NBA Free Agency Has Been Crazy

But at this point James could have that many 30 for 30’s…and counting.