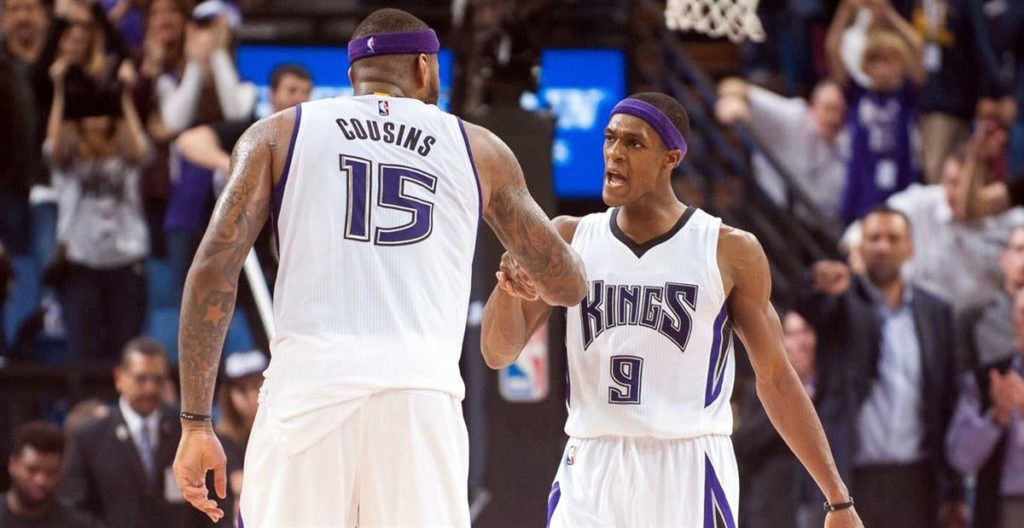 A Pair Of Kentucky Kings Are Appointing Royal Numbers In Sacramento

Just when you thought everyone was going gaga about the halftime baby race in Sacramento, the Kings have a pair of cats that are clawing away at those not ringing the cowbells.

Sure they’re their record stands at 4-7, George Karl again looks under fire and rumors have him having a beef with the teams big star but there’s more at stake here for a team that is Rudy Gay, Caron Butler, Seth Curry, David Stockton and Willie Cauley-Stein deep.

But it’s not the new Kentucky kid we’re talking about right now, even if the rookie is making it his year.

We’re talking about two former Big Blue alumnus who are taking Kings nation to the gold of California no matter which Curry and Warriors rule the state. Right now the Kings Kentucky big-man and point guard are waking up the Sleep Train Arena like the good old Arco days of Chris Webber and Mike Bibby/Jason Williams. General manager and assistant legends Vlade Divac and Peja Stojakovic can see that.

Against Canada’s Team, the Toronto Raptors this past Sunday the Kings didn’t take it easy on “Gods Day”, as Cousins doubled up with 36 points and 10 rebounds to Rondo’s 14 assists. But it got even hotter than that back home in America.

Brooklyn got no sleep in the Train Arena in Sacto this weekend as the Kings owned all the nets 111-109. Across the board and box core the Kings have all the men ready to fight, but their crowning achievement was the monster DeMarcus Cousins’ massive 40 points with Boogie’s down low production of 13 boards and yet another triple double from Rajon Rondo (23 points, 14 assists and 10 rebounds…NICE!), as this former Celtic is reaffirming himself as the best all round point in the game.

And here’s people thinking one of these guys was going to get traded and end up done like the other one.

Whichever way people look at it they are wrong because Cousins and Rondo are two former Coach Cap players who are relating to each other as one of the top tandems in the league. A dynamic duo like no other. Somewhere between a Stockton and Malone or a Shaq and Kobe. This one, two punch is knocking everybody out.

It’s a Boogie wonderland right now for DeMarcus Cousins who has just been named the Western Conference Player Of The Week and has also developed a bit of a three-point shot. Now the best on the mound since Barkley is really getting scary.

As for Rondo, Rajon has become the first King in the Sacramento era to notch three triple-doubles in four games (14 points, 12 rebounds and 15 assists against MVP Stephen Curry and his champion Golden State Warriors a game prior). Not bad for the first few weeks of a new season on a new team.

“I kind of get caught up watching him play.” Cousins said of Rondo to press. “It’s just amazing being able to watch his effort on a nightly basis, but as far as his rebounding it kind of gets on my nerves. He’s stealing my boards, man. But man, he plays every spot on the floor”.

There’s more than admiration there. Or even mutual respect. But a bond of brothers that goes beyond the NCAA U.K. to these fellow graduates new Californian dorm in the NBA that’s going to take them from the basements to the rafters of their respective ceilings one day.

They have the keys to the kingdom. Now hows that for a throne?