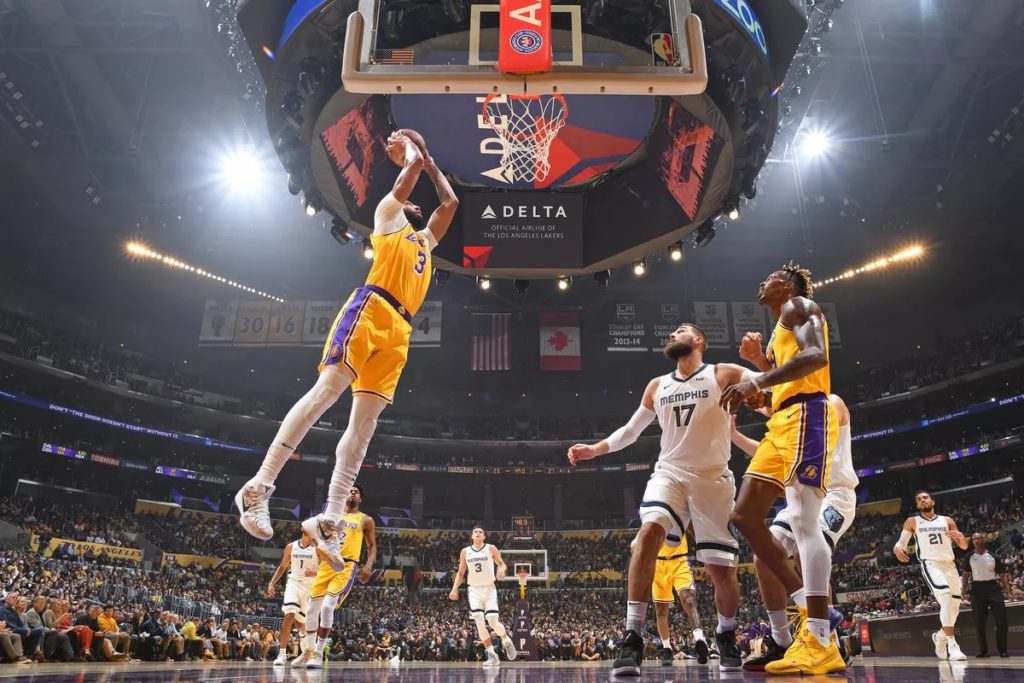 Anthony Davis…That’s It, That’s The Headline

That’s the Grant Goldberg mocked up photo I show people (or the one of him cradling Larry O’Brien like Kobe in that infamous shot and those iconic 2001 championship jackets in Philly) when they say that the Lakers traded their entire young core future away for A.D.

And let’s not forget Kuzma…or the fact that he, Rajon Rondo and DeMarcus Cousins (did you forget they still had him too?) are still three potential star starters out for a Lake Show who are running this like Showtime right now. Or the 80’s Lakers television series from ‘The Big Short’ and ‘Vice’ director Adam McKay based on Jeff Pearlman’s classic ‘Showtime’ book, starring John C. Reilly perfectly as Dr. Jerry Buss that we just can’t wait to see.

But after tonight all you need is A.D.

Haters will say Anthony Davis just put up these NASDAQ numbers because no one else could (COUGH LeBron putting up his COUGH jersey number (and remember he isn’t rocking 6 this season after all) like the rafters it will one day reside in with the 3). But when you’d be lucky these days to find a big in this league who could average the top 20 and 10 standard from the field, forget apples, with 40 points, 20 rebounds (that’s Wilt Stilt stacked), 2 assists (you have to love it when he finds McGee like whoever braids still one of the Lake Show’s most energetic and emphatic players hair) and blocks (DPOY?) off 26 for 27 from the line (oh hai Shaq), how about this bushel?

Oh and the first player to put up 40 points and 20 boards in a sweet 16 years (hey Shaquille) only needed three quarters to do it before taking a Gatorade break like Kobe’s 62 shooting against Dallas in ’06.

Oh and just a week Laker the Black Mamba put up a career-high 81. Just saying.

Consider THIS a warning.

Still some (like this writer at tired times) will say he wasn’t worth all of Lonzo Ball, Brandon Ingram and Josh Hart who are ballin’ out of control like Jermaine Dupri out in NOLA right now without the Mardi Gras of Zion…yet. I still feel bad for the kids, Randle, Russell, Jordan, Nance Jr. and all of them. But put it this way, remember those Brand, Odom, Maggette, Miles, Dooling and Q-Rich young Clippers back in the Kobe days? You telling me you wouldn’t trade a few of those guys for Shaq? The Lakers kind of already did that with Eddie Jones and Van Exel. This is what we’re dealing with right now. And after tonight I’d give New Orleans Magic, Rob Pelinka and that fantasy Kobe/Heath Ledger dinner for Davis.

Did the Lakers win? Did they win? Like Method Man asking Raekwon on the Wu Tang Clan album “is he dead” do you not see the blood coming from all sorts of places? The Grizzlies may have gritted and ground it tough without Mike Conley Jr. (whose Jazz lost to the Lakers in the last sing) and them, from the flash style of superstar to be Ja Morant, to the substance in the middle that Davis had to deal with too of Jonas (All-Star year?) Valanciunas’ 14 points, 11 rebounds and 2 assists. But with LeBron blocking Memphis like it was their inactive Igudola (time to give him up for the Lakers Tennessee) in the Land of the rising Cavalier 2016 NBA Finals and keeping it in play for Quinn to cook an aley-oop to McGee off the momentum, there was just too much King gold for the Elvis King of rock-n-roll franchise, leaving the building with a 120-91 L.

Now 3 and 1 after all the mocking for dropping the first game (it happens people) the Lakers were running this s### like the time Lil’ Wayne said he had four thighs. Swaggering like a Jay-Z, T.I., Yeezy and Weezy collabo LeBron’s Lakers were King like Jesus with Avery Bradley (the Lakers lockdown Bruce Bowen) adding 12 and 2 steals and even the guy they said shouldn’t play more than him KCP going one better with 13 points, 6 rebounds, 3 assists and 1 block. What a line. Send out the smoke. The Pope is back in the building.

And following their last home-stand that still stood like Elton John, Lakers fans have to give it up for the redemption reunion of former Rocketman Dwight Howard. Anthony Davis may be the next great big in Lakers legendary lineage that D-12 hoped to be after Mikan, Wilt, Kareem, (Vlade), Shaq, Pau and almost big, bad Bynum. But number 3-the first one with a three ball-has the greatest big-three run of Lakers seven footers behind him in purple and gold storied history with McGee, Howard and former Pelican Robinson to his twin tower Duncan, DeMarcus Cousins who we still believe can call it a comeback like Cool J for this purple and gold phenomenon about to knock you out like mama said…word to Lenny Kravitz.

Must Read:
Is Toronto's Very Own Anthony Bennett Coming Home?

But with Davis becoming the first player of the shot clock era to put up a 40/20+ game, in just around the half hour time it takes you to watch an episode of ‘Brooklyn 99’ (the previous fastest with 46 and 22? Oh just another legendary Laker, Elgin Baylor back more than a half-century ago in 1961 in a Kareem clock 33 mins for your top 50), he showed you who needs a big-three in the era LBJ started (although they will have one when Kuz comes back. If ‘Bron and The Brow are Magic and Kareem, then Kuzma will be the underrated Big Game James Worthy clapping again. That 42 legend was basically the Lakers Scottie Pippen) when you have number 3?

Everyone got taco’s again this Tuesday as for his latest viral video LeBron excitedly pointed to various parts of the STAPLES crowd just as enthused asking his signature “WHAT IS IT” to their call and response, before making that culturally inappropriate, but charismatic noise as Cousins suited next to him covered his laughing face in emoji like embarrassment. Still, say what you say. More importantly than this bit of corn, LeBron literally provided a taco truck yesterday for firefighters battling the Southern California blazes.

But when it comes to a grizzled Anthony Davis ‘Revenant’ showing the Grizzlies with reverence who the real bear is, joining Mikan, Elgin, Wilt, Kareem and Shaq in the Lakers 40/20 legendary company club…eat that!

That’s not all folks!