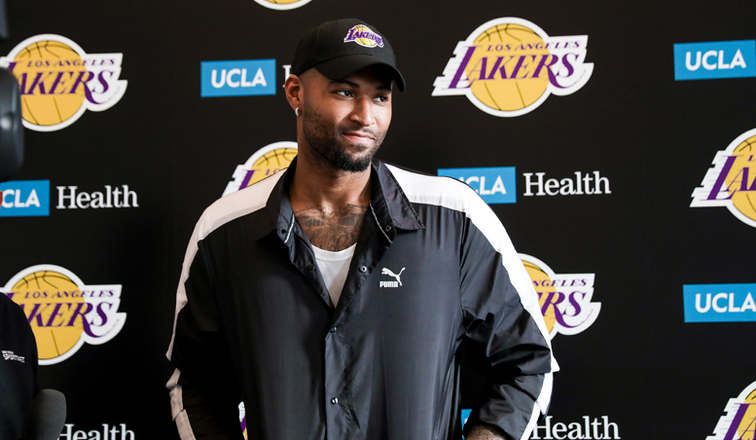 What was unfair however was the ACL injury that kept Boogie sidelined for most of the season and then the quad injury on top of that in the playoffs that made sure the Warriors wouldn’t be dancing in their final chapter in Golden State.

But as D.C. made a Cali move too like the Dubs across the Golden Gate to San Francisco, heading to LeBron’s Lakerland with former frontcourt friend Anthony Davis, what was really unfair is what’s just come out of a practice run this week.

Cousins has tore his ACL again in a horrible twist of fate.

When DeMarcus reunited with the same former New Orleans big man that rocked his jersey in beautiful All Star tribute a couple of seasons back when they briefly flew together as Pelicans this Summer, the Lakers furthered their favourite status like tapping that heart on Twitter. Even if the Clippers ended up being the ones that got Kawhi Leonard…and Paul George too for the new battle of Los Angeles, raging against the Lakers Hollywood machine, the Lake Show have the ‘Space Jam 2’ of the King and the ‘brow. Not to mention the difference maker like rising star Kyle Kuzma in the veteran one of Cousins.

Either one of them will blow, or both, as the other will show he’s still got it. Giving the West’s best the biggest force of an interchangeable frontcourt. As the Lakers could either go with the more muscle version of a Tim Duncan and David Robinson twin towers in the Pelican reunited Kentucky Wildcats of Davis and Cousins and ‘Bron. Or the most dynamic duo since Shaq and Kobe of James and A.D. and the one young core star who didn’t get switched for this franchise player in Kuz, who could form a big three if the injured Cousins isn’t already still a part of one. Despite the writing off medical report.

And we haven’t even got to his Kentucky alumni Rajon Rondo led backcourt, or last year’s all dunking and blocking big headband and hair spark JaVale McGee. A gym rat who re-upped after almost going for both the Defensive Player Of The Year and Most Improved Player award in the first month of last seasons 82 campaign.

The Lakers are going to need him and that first wind of last year now more than ever.

Or the California club have some decisions to make for who to put in purple and gold for their almost meant to be final roster spot (DON’T AMNESTY!). Do they still wait for another former Warrior in Sixth Man, defensive legend Andre Igudola? Or do they leave him and the long rumoured other Anthony in Carmelo and pick up another big? Guys like Nené, Amir Johnson, Joakim Noah, Kenneth Faried, Zaza Pachulia and Marcin Gortat are still on the market like fresh fruit stalls. And even Dwight Howard of all people have expressed (more like blatantly begged for publicity) for a return to Lakerland after his Hollywood divorce.

Because we have no idea when Boogie will be back. Or if he will even be the same player when he returns. Or if he even was before this injury happened. But despite history rewriting so many careers crippled by injury we still believe. We still believe he has superstar status and could be the X-factor difference maker when he returns late in the game to this Hollywood scripted rivalry like he almost was last season in the Finals against Toronto as he flips it. You saw him almost become a Splash Brother with that three, so just you wait until you see him downtown in STAPLES this season when it’s all said and buzzer beater done.

The bridge is far from over.