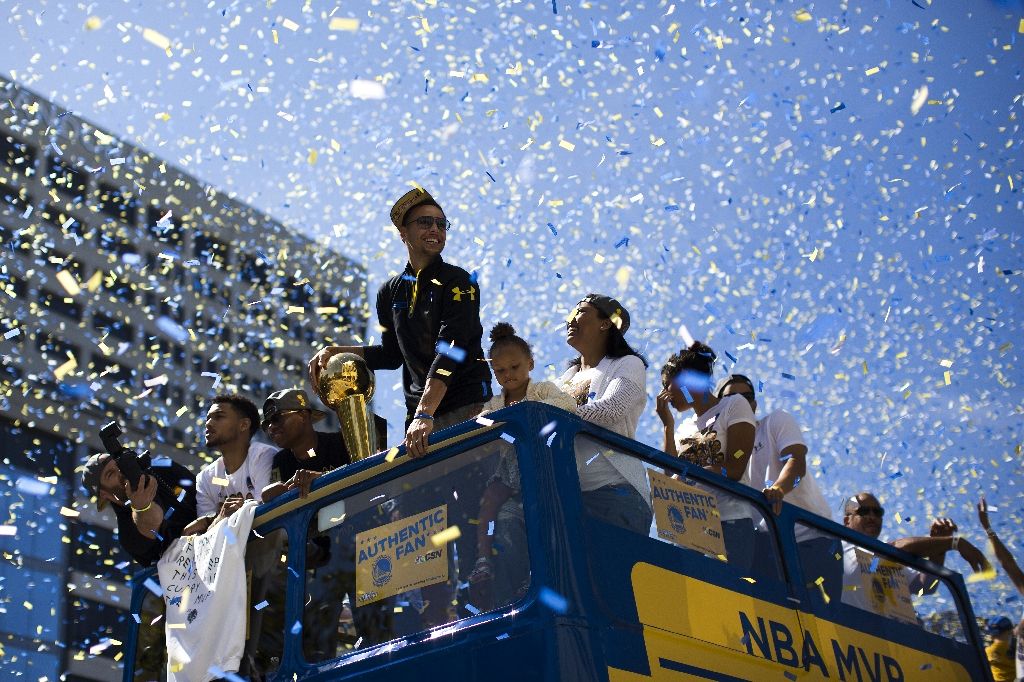 Ticker tape hasn’t seemed to stop falling in the blue and yellow side of the Bay Area ever since the final horn erupted as the Golden State Warriors won Game 6 and the NBA Finals against the Cleveland Cavaliers this week.

And today the Golden State Warriors paraded their trophy across Oakland California in an open top bus as all their stars were out in force. Finals MVP Andre Igudola, Klay Thompson and of course Curry…little Riley Curry.

Even M.C. Hammer of all people was on hand…or should we say pants like it was 1990 all over again. All that was missing was the Hammertime of Run TMC (Tim Hardaway, Mitch Richmond and Chris Mullin).

Yet it seems like when it comes to the Golden State Warriors, Oakland are telling their neighbors across the Bay that they can’t touch this.

Although the two Golden Gate/Golden State towns share this team somewhat, private plans for purchased land are being put in place for this franchise of the future to cross that iconic red bridge and rejoin San Francisco properly. Taking that team back to one of the worlds most famous cities and popular tourist destinations and the place of glory for Rick Barry’s sixties championship Warriors team.

Although it’s been 40 years since 40 points per game fuelled last Warrior championship, the San Francisco Bay want to end the four decade drought of not having an official NBA franchise, although everything is Golden in California states city of Oakland. San Fran may have the Skyscrapers, Pacific and Alcatraz but they want to lock down the rock too. And an arena is in place. All this team has to do now is take that bus across that bridge.

Yet officials of Oakland want to put an end to this and give their town something to still be proud of. Normally making the news for all the wrong crime and violence reasons, The City of Oakland were definitely in the house today, showing nothing but California love as Tupac Shakur once lamented.

Must Read:
A tale of two magnificent game sevens

500,000 fans took to the streets and kept the peace as they honored a team and basketball family that have brought them all together. Now a legendary franchise after years of coming so close but so far with leaders like Jason Richardson, Baron Davis or Monta Ellis, the Warriors just seem like Golden State’s. Still the team with the trophy and award for coolest name in the business have been all over the country in their time. Once holding court in Philadelphia with Wilt Chamberlain. And technically they where a part of San Francisco before they moved over to Oak-town. It would be a great thing for a major city like Frisco if they had a major, successful sports franchise, especially in their Pacific battle with Los Angeles for California. Yet again after town and team have come this far, why would they walk away now?

From formidable film franchises like the ‘Terminator’ to the ‘Planet of The Apes’ the Bay Area’s beautiful and iconic Golden Gate Bridge has set the stage for many epic movie set-piece battles. Now, however it’s about to hold the floor for one city to city tug of war over a basketballs new formidable franchise. It’s set to be a big-budget, billboard blockbuster event that you couldn’t even find in theaters right now.

No matter who ends up back on their side with the longer piece of rope straw, right now Golden State are the winners tied with nobody but their Warriors.

This is Oakland’s moment of gold in the Californian sun. So much so, you can see it from the other side of that bridge.