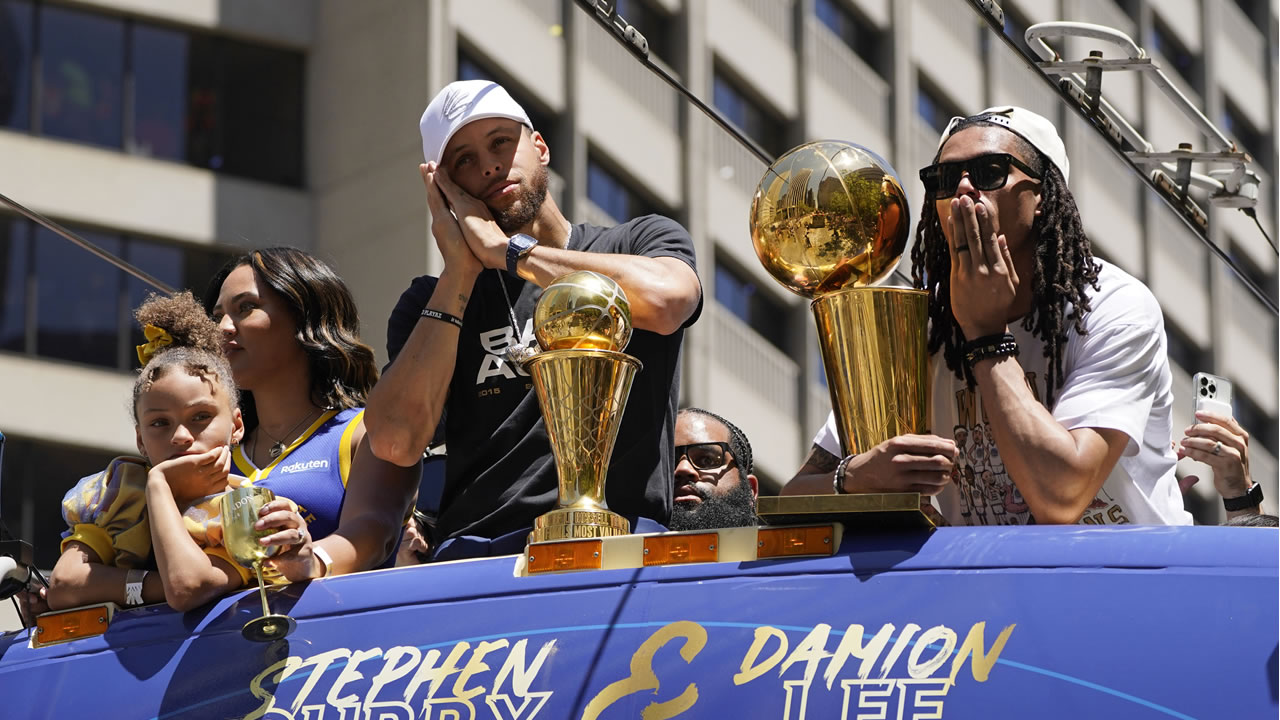 The heat in California held no chance of precipitation yesterday, but the Golden State Warriors’ victory parade still reigned.

That’s just what dynasties do.

After beating Boston in six games, the 2021-22 NBA champions took to the streets of San Francisco in a blue double-decker bus for a victory lap.

Back again, like Finals MVP Steph Curry’s t-shirt read. Fans climbing lampposts and looking out of skyscraper windows were elated to celebrate the Warriors’ fourth championship in eight years.

Dubbing this one the best yet, they made snow angels in confetti. Truly the only thing that fell from the skies on this day of joy. All, as MVP chants for the chef simmered around the city. Shouted to the heavens. And the street signs number 30 banged.

“We represent you guys,” this year’s three-time Most Valuable Player told the crowd. “The life that you give us, the inspiration, all those things matter. That’s what it’s all about. Entertaining you guys, giving you something to cheer for, be passionate about. It’s giving us the platform to go do things that haven’t been done before in history, and representing the entire Bay Area in the process. We’re back, having a parade in San Francisco, so let’s go do it.”

Ayesha Curry, confirming a fan’s banner that she can cook and Sydel Curry (Steph’s sister and Damion Lee’s wife) both wore blue jersey dresses of their partners. And we will leave to your imagination where their husband’s names and numbers were placed.

A young fan even had a sign asking Stephen for Riley Curry’s hand in marriage. The boy is just a kid, but a freeze-frame on Steph’s face said it all. You remember that scene from ‘Bad Boys 2’ right?

Must Read:
Caleb Houstan double-double too much for Brazil at U16 FIBA Americas

Meanwhile, baseball cap on backwards, a shirtless Gary Payton II, as he said he would, went “full J.R. Smith”. Getting into it with the crowd. Posing for selfies.

Jordan Poole started the party with a super soaker. Champagne flowed. Klay Thompson danced like Michael Jackson in a sailor’s hat. And Draymond Green gave the most motivating and inspiring speech, as players and fans alike reaching for tissues could blame the bubby burning their eyes.

“What brings me the most joy … is seeing the guys who won it the first time,” the soul of the squad told his Splash bredren. “In your journey, you always want that first-time feeling back. The reality is you never get it again, and the only way to get it again is to feel it through Andrew Wiggins, Jordan Poole, Otto Porter, Beli, Moses, GP … you feel it through those guys and that’s how you get that sensation again.”

“Thank you all, and it’s always f— everybody else,” the ultimate troll said in conclusion. Leading fans in chanting “F### Draymond”. Sticking it to the Celtics fans, who did the same to him throughout the series.

To top it all off, in true Steph fashion. Microphone in hand, Curry let it fall as he broke out his signature sleeping pose. Now iconic as a Mike Breen “BANG” that usually comes after. The same gesture he put every opponent to rest with this year, from waaay downtown.