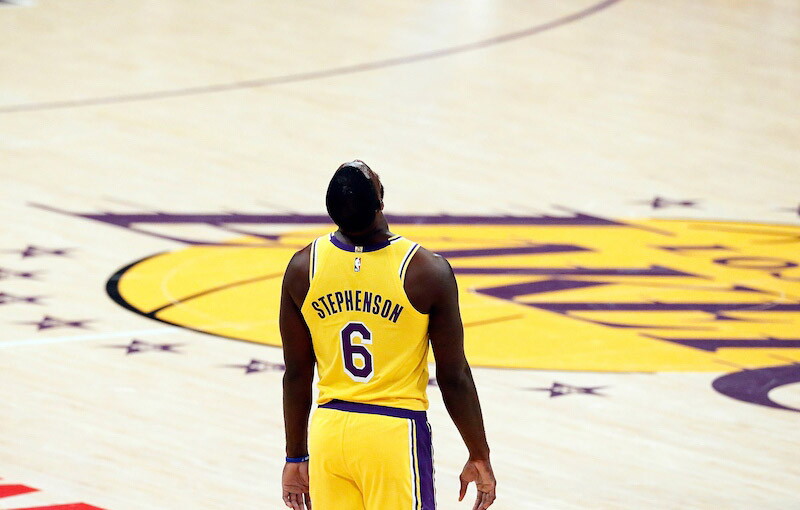 I love you Lance.

At the moment the Lakers don’t have a whole lot to sing about. Sure it’s been a fun season and the King is back. But LeBron James or not it looks like everyone else is about to leave. As Magic looks to offer everything in L.A. except the gridlocked traffic (try missing your 15 minute rush hour Uber window because of a clipped card and seeing how long a 45 minute drive from Santa Monica to the downtown of the STAPLES Centre takes you with a half seven tip-off game on the line), to get Pelicans superstar Anthony Davis.

Who has demanded a trade from New Orleans, but will be a free agent next year and has informed the league that the Lakers are his preferred destination (minus the car congestion) and any team he gets dealt to will merely act as a one year rental until he dons purple and gold.

It all seems pointless doesn’t it?

But there is another Anthony that looks almost as ‘so near so far’ close to joining the LeBron Show. And that’s his merlot friend and former Rookie rival Carmelo. With the exuberant young core of Lonzo, Ingram, Kuzma, Hart and Zupac (they already all go by one name…so you know they’re good) on the block and the Lakers not learning from Randle or Russell (who has just been named an All-Star for Charlotte, to many a tweet from many a player including the not so subtle shots of last year Laker spark-plug Isiaah Thomas tweeting, “one team didn’t want you but another did. And now you’re an All-Star”.

Some real character that was retweeted by Larry Nance Jr. Damn! Jordan Clarkson may as well have favourited it), it looks like they are all about the vets like sick pets. And to be fair the meme team is ‘Stranger Things’ have happened hella fun. From the all dunking and blocking energy of ‘Defensive Player Of The Year’ conversation JaVale McGee, to the All-Star veteran star scoring in bunches of Michael Beasley. And of course the pure point of Rajon Rondo, perfect for Lonzo. But finally after returning from spending most of the campaign being suit and tied to the pine with injury or spitting suspension, he’s now on the block with Ball and Bease’ back to the N.O.

Where he backpedals to the futuristic downtown Pico skyscrapers of the city, whilst dribbling to set up his signature shot that is all bucket and water. You just know it’s already going in as he does tuning his guitar and then strumming the Gibson to that now classic celebration song that has been modern iconic since the day he played the Warriors a ditty on Christmas Day like chestnuts roasting on an open fire.

And now everyone’s doing it like the South Korean sensation BTS hash-tag ‘Idol Challenge’. Flossing like Fortnite it’s the new groove for emperors of all different types of parquet floors. Steph auditioned it for a team sponser Wish commercial. Even dunking dynamite dynamo Russell Westbrook of the Thunder rocked it when he hit a big shot against the Lake Show to weather the purple reign. But Lance didn’t like that. Not.one.bit. You should peep the hilarious photo. It should come with a caption that’s the opposite of those memes that say, “find yourself someone that looks at you like”…

Blow us a tune in our ear number 6. But what goes through his head when Lance licks? Well the fires in his eyes and the words are really clear. It’s not the Rolling Stones or Guns N Roses. Showing how funky and strong his fight it’s the ‘Thriller’ classic of Michael Jackson and Eddie Van Halen on the axe.

And with that here’s a message to the Lakers. To play you need six strings…not just one. One snaps and like Christmas lights all going out, music can’t be made.

Lance Stephenson ladies and gentlemen! Music to the Lakers fans ears. Let’s give him a hand.

Born ready to be a rock star.

In this article:Lakers, Lance Stephenson, NBA