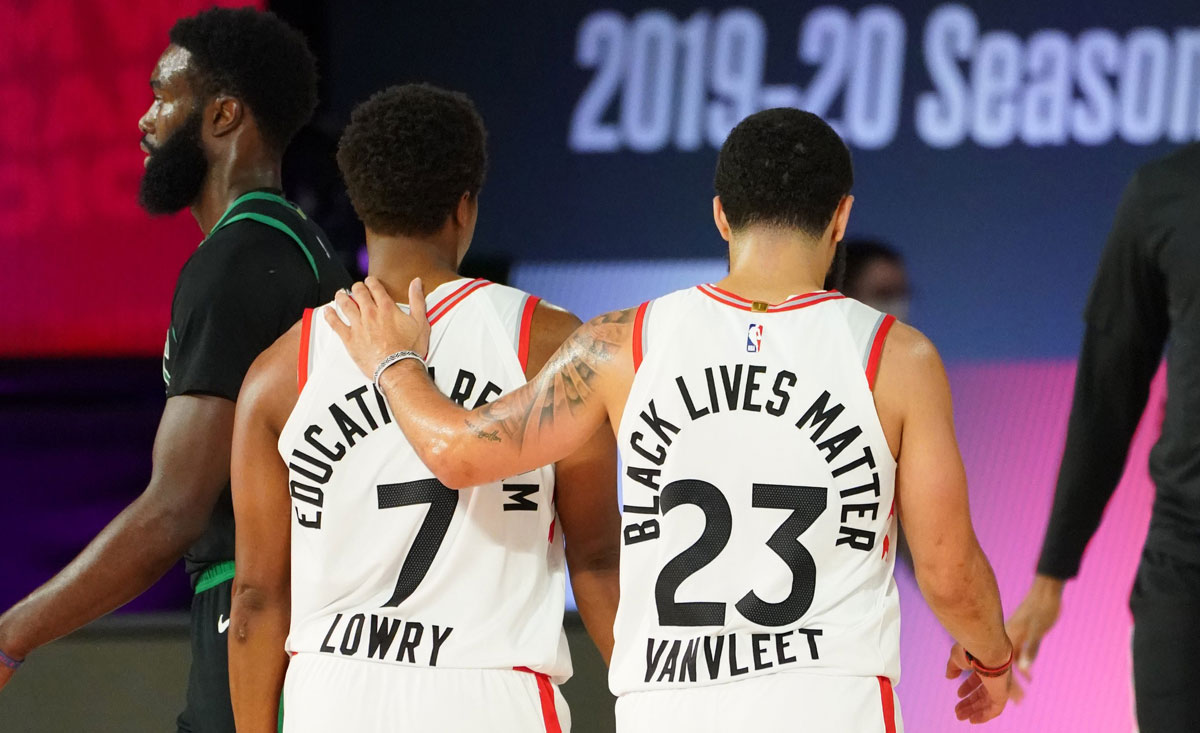 The hope of back-to-back NBA championships is slowly fading for the Toronto Raptors.

The Boston Celtics fought-off a late 12-point third-quarter deficit to defeat the defending champion Raptors 102-99 to take a 2-0 lead in the best-of-seven Eastern Conference semifinal series.

Playing their trademark style of basketball for three-quarters, the Raptors wrestled away a tightly-contested game from the Celtics with a 11-0 run to push ahead 78-66 with 2:46 remaining in the third-quarter.

Poor shot selection in the last three-possessions left the door open for the Celtics to capitalize as Jayson Tatum scored four straight points to bring the lead back down to single digits at 78-70 with one quarter remaining.

Nearly perfect this season with a 31-2 regular season and NBA playoffs record when leading by eight-plus points through three-quarters, it took a rarely-seen three-point outburst by Celtics guard Marcus Smart to shift the balance of the series. Smart buried an improbable five straight three-pointers, the last one a four-point play to give Boston an 86-85 lead with 7:55 to play.

“I mean Marcus Smart made five straight threes. That’s one that’s just, it’s tough, it’s tough, he got five threes. We played a well-energized game, we just didn’t close it out. We just didn’t finish the game defensively as we should have,” said Raptors point guard Kyle Lowry

Nick Nurse, Raptors head coach and the 2020 NBA Coach of the Year, said he compared Smart’s timely shooting to a similar comparison to what Fred VanVleet did last year as Toronto overcame a 0-2 series deficit against Milwaukee Bucks.

With the game up for grabs the Raptors’ offence went dry, scoring just 14 points the rest of the game while missing 23 of their final 28 field goals.

The Celtics have been one of the few teams that has enjoyed success against the Raptors this season, compiling a league best 5-1 record against Toronto and 3-0 advantage in games played inside the NBA Bubble.

The Raptors failed to shoot a foul shot in the first half and finished the game 16-for-19 despite scoring 44 paint points. Boston Celtics All-Star forward Jayson Tatum converted a perfect 14-for-14 of his free-throw attempts.

“He shot 14 free-throws. That’s as much as our whole team. They (the refs) took very good care of him tonight,” continued Raptors coach Nick Nurse during the post-game press conference.

Kemba Walker had 18 points, six rebounds and four assists and played well down the stretch, putting the finishing touches on the game with his patented Cardiac Kemba crossover. Difference-maker Robert Williams III provided solid minutes once again, contributing 11 points, four rebounds on a perfect 5-of-5 from the floor.

Despite the consistency on offence, one of the glaring areas where the Raptors have struggled against the Celtics is the mid-range. Toronto has only managed to score a total of 14 points in two playoff-games against Boston, opting to shoot a bevy of above-the-break three-pointers (any three-pointer that is not taken from the corners).