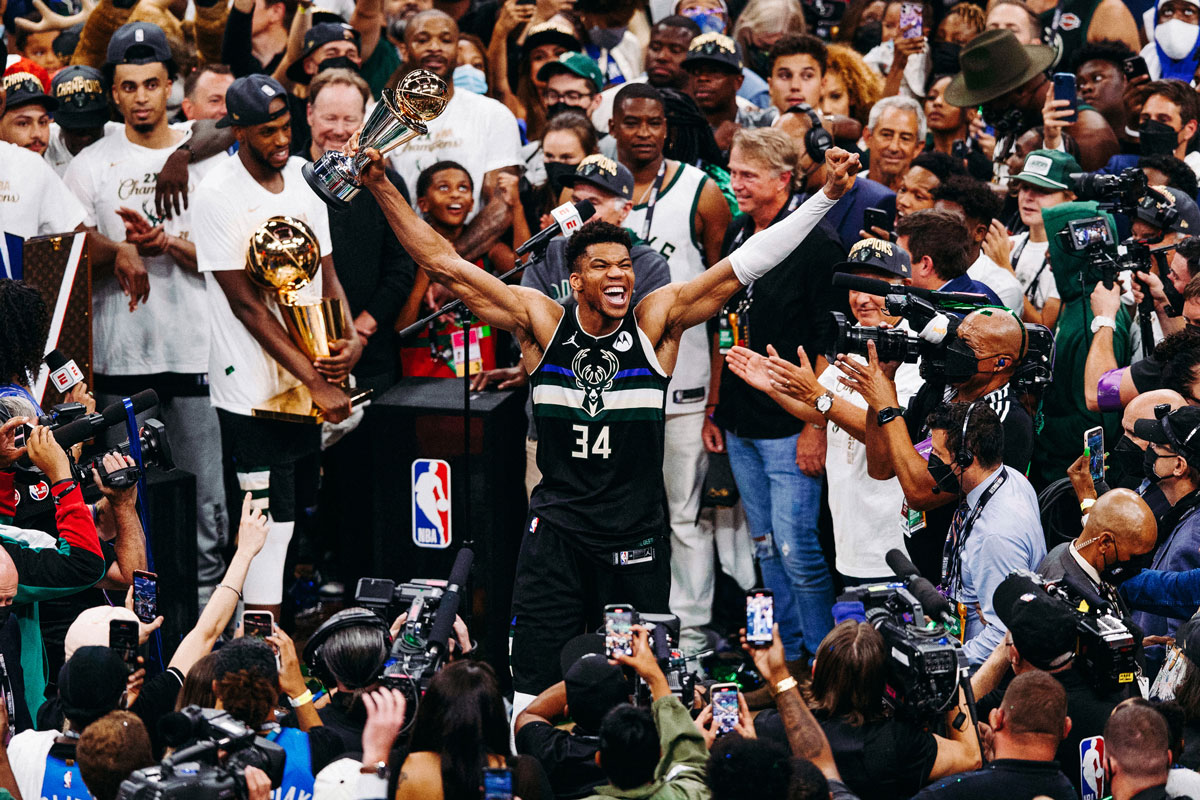 That was the last time the Milwaukee Bucks won an NBA championship. Making a lasting legacy behind the legendary likes of Kareem Abdul-Jabbar and Oscar Robertson.

From this moment on.

This will be the last time anyone ever talks that mess about Giannis Antetokounmpo.

He went from insult, to injury, to inspiration.

He storied now, wearing a gold leaf reef of a crown.

With Devin Booker looking on with hurt admiration and mouthing “damn”, Giannis touched the floor like it was the sky. He then sat in a courtside seat like a celebrity and just soaked it all in through blood, sweat and tears that were soon to be mixed with champagne for this campaign.

How can you not love this game, this series, this city, this team, this man?

The former Defensive Player of the Year, two-time Most Valuable Player, now finals MVP and of course champion became the only player other than Hakeem Olaujawon and Michael Jordan to achieve such feats as this.

His story of history.

The only five-time All-star with five All-NBA selections to go with multiple MVPs (one Finals) and a DPOY before his 27th birthday.

Only Duncan and Kareem have won this many regular season and finals MVPs before the age of 26.

The first player since Shaq in 2001 with at least 40 points, 10 rebounds and 5 blocks in ANY playoff game.

And this was the NBA Finals baby!

Float down the hardwood. Sting in the paint.

The Greek Freak’s 50 piece gave Milwaukee their first trophy in 50 years as the one they called Robin became legendary like the Dark Knight. The actual Batman’s sidekicks didn’t disappoint either (former Most Improved Player Khris Middleton had 17, 5 and 5. New Point God Jrue Holiday’s styles had 12 points and 11 assists). But in the end it was all about the young man from Greece taking his podium in this court coliseum on the eve of the Olympics.

Antetokounmpo’s place in the rafters next to Robertson and Abdul-Jabbar is as secure as the banner he just put up there.

Milwaukee jerseys back then used to go without the name on the back, but now everyone not knows his…but can spell it right too.

“Maybe in 15 years, 20 years. Maybe my name is up there next to Kareem, Oscar Robertson.” That’s what a skinny kid from Europe said eight years ago in the Bradley Centre, looking up to the ceiling he’s just smashed.

Well, that day starts today with a banner.

Now all three of the Antetokounmpo brothers have rings after Kostas won last year with the Lakers in the Bubble.

Prior to last season Giannis signed a supermax five-year extension because he wanted to do things, “the hard way”. Like the late, great Kobe whose Mamba Mentality tweet challenged him to follow his MVP trophy with some real championship hardware, the job was not done.

It is now though.

“I just couldn’t leave” said the Bryant or Dirk loyal to his franchise superstar, looking to be a Tim Duncan lifer.

And with a Hall of Famer Bob Pettit closeout game equaling 50 points, 14 rebounds and 5 blocks he just couldn’t miss, closing out Phoenix, who I had to win it all (you have to give it up for the last big-three standing and their classy coach though). Especially from his time on the line. Slashing and dunking to the rim to maximize his potent points in the paint. You should never underestimate the heart of an MVP who is now a champion, making it “Suns in four losses”. Just like when Italy told England in the Euros that actually, “its coming Rome.”

The future of the NBA with the Tokyo 2020 games on the rising sun horizon is global.

The same place the Gods gave us the grail of a basketball blueprint for your prototype player of superstar status.

Or the fifth Finals MVP from outside the US after Olaujawon, Duncan, Nowitzki and Tony Parker.

After 1971 back then and now in 2021 give the Bucks a few more chips to engrave in the history books and we may have another storied NBA team on our hands.

They told you to fear the deer.

Now you can buck the hate.

In Wisconsin its a new day and a stag party led victory parade.

And it’s all from the man whose Game 5 ego and pride versus humility speech went viral recently.

But there’s no need to live in the past now, or worry about what tomorrow will bring aside from the headlines. Right now Giannis Antetokounmpo can live in and enjoy this moment.