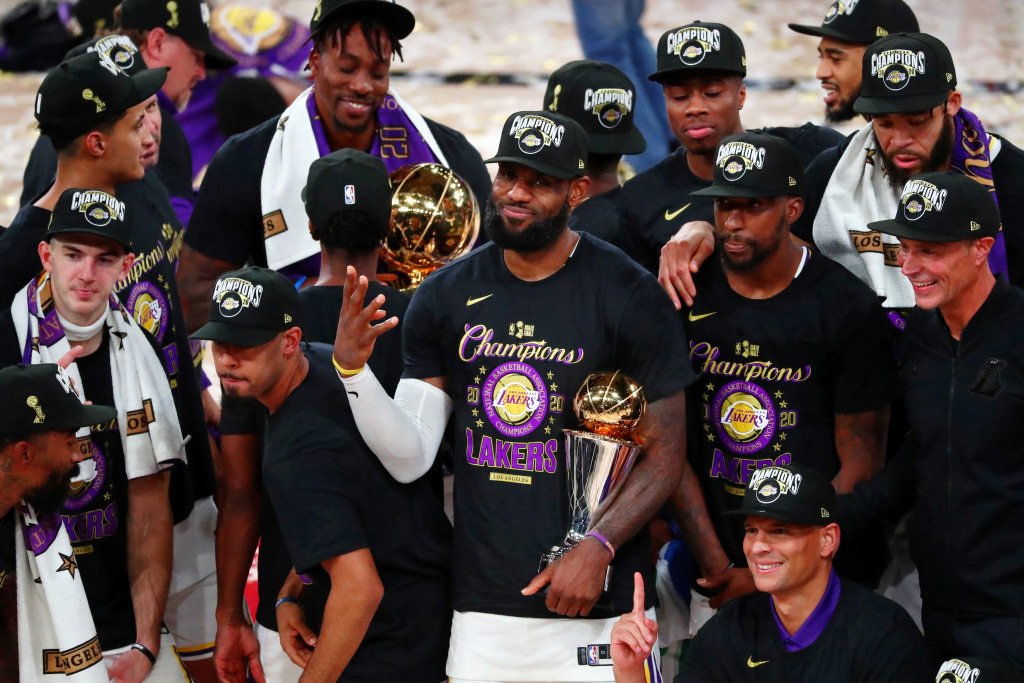 What a hell of a year! The worst one yet. Coronavirus and police brutality. Losing everyone from the Black Mamba to the Black Panther. Tragedy struck every month with the turn of a calendar … and it all started on that fateful January day when we lost Kobe and Gigi to that horrible helicopter crash that also claimed the lives of Payton Chester, Sarah Chester, Alyssa Altobelli, Keri Altobelli, John Altobelli, Christina Mauser and Ara Zobayan.

We needed something from the hoop heavens.

So tonight the King delivered the throne and reclaimed his throne in his 17th year for the Lakers’ Celtics-tying 17th championship and their first in a decade after a five-year postseason drought.

All to become the only player in NBA Finals history to average more than 25 points and take home the Finals MVP for a big three different teams as he and the Seattle Storm’s WNBA Champion Sue Bird both won their fourth ring in their 17th go round the basketball sun.

He finally has the valuable player award that he’s most worthy of.

Now give him his “damn respect.”

He wants it too, but not as much as the ring. That’s the thing and the everlasting circle that trust will never end like the infinity 8 of Kobe like forever 24.

If you didn’t think this man was a real Los Angeles Laker then look at all the gold for this purple heart. You’re right, he’s not a Los Angeles Lakers player. He’s a Los Angeles Lakers legend! Right there with Mikan in Minneapolis. The fire and ice of Elgin Baylor (who his game is most like) and the logo Jerry West. The 100-point dominance of Wilt Chamberlain. Magic and Kareem. Shaq and, of course, Kobe.

Who this is all for in Mamba jerseys … like Gigi too. The Mambacita.

For all the Black lives that will always matter.

The Lakers playing in their Sunday whites took the white hot Heat to church, behind LeBron’s do-it-all triple-double of 28 points, 10 rebounds and 13 assists. Still, you have to give it up for the talents of ‘Bron’s former Miami and this new South Beach squad in Florida’s Disney World Bubble that is now blowing up in celebration.

Despite 106-93 being all that Jeanie Buss’ squad wrote after bringing out the birthday blowout candles early in this closeout, the Heat had more heart than Ocean Drive has sand and sea. You only had to see every ounce of Jimmy Butler’s beating heart drained, slumped over in the last game like a Joe Frazier underdog. He refused to be knocked out with his team on the elimination ropes.

Must Read:
On Your Left...Kobe Bryant Switches Hands Like The Greatest After Injuring Shoulder

As a Laker fan, however, this writer was straight scared (and remain so like a nightmare … is this a dream?) of Jimmy like I was Dame Lillard or Jamal Murray. This was no cakewalk or asterisk like a lockout for this locked down league. My fear of Butler was all too real, though. Like a stepping over Allen Iverson. Or Shaq, Kobe, Malone and Payton beating the Detroit Pistons. He’ll be back … and the former Bull, Wolf, Sixer with this team, too. To think people though superstar journeyman of sorts Kawhi Leonard was the one to follow to the promised land.

The land the former Cleveland and Miami superstar took Los Angeles to. The perfect Hollywood scripted ending before he puts the finishing touches on Space Jam this summer. Like Mike did coming out of retirement.

The legacy he has left still continues for you to witness. For James and all the Kings men. Like the big Anthony Davis with his 19 and 15 double-double. Worthy of all the Brandon Ingram’s, Josh Hart’s and Lonzo Ball’s traded for him for his big game next to James. One of the greatest of this generation and all-time. The new best defensive player of the year, no matter what the award says and how about that offence too? Extending now to downtown Los Angeles like Pico Boulevard.

We hope his address remains in California after this season, but if he walks to a homecoming in Chicago like Kanye West we won’t blame him. We will just thank him.

This whole team deserves it. From third man Kyle Kuzma to the GOAT Alex Caruso from the G League to a Finals starting spot. Bigs like the headed monster of Dwight Howard and Javale McGee (for all he’s done this season). The from deep and defence of multiple champion Danny Green (those who sent death threats should really take a long look at their lives) who re-upped after last years chip with Canada’s very own Toronto Raptors.

Must Read:
Deck The Hall Of Fame With Tracy

Playoff Rondo who now becomes the only NBA player in history to win championships with the leagues top two most storied franchises (and now the Lakers have the chance to finally overtake the Celtics, starting from next season). The new Pope, KCP for three. The one winning Morris twin in Los Angeles. Even the big names and games of J.R. Smith (redemption for his Cavs Finals mistake meme) and Dion Waiters brought in to supplement Avery Bradley who bravely gave up his playoff spot for his son. Give him his ring.

They are all winners and champions like Quinn Cook retiring his number 2 for Gianna and wearing 28 for her and her dad, Jared Dudley and even an Antetokounmpo.

We are the Champions, King! Who said we should shut up and dribble? Not the man who won an Oscar who is now watching this Dear Basketball dedication from on high.

Bean who beat Beantown for the Lakers’ last chip in 2010 was there in spirit. You just know he was. Smiling that Mamba grin of champions. Counting his fingers.

Way to finish the job.