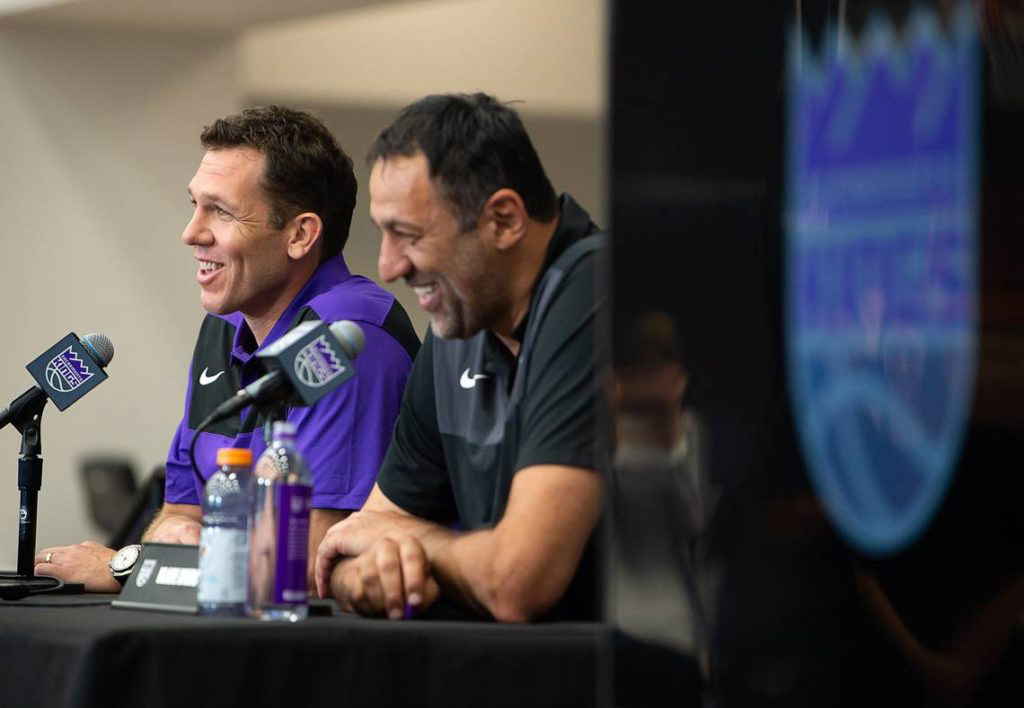 With The Magic Gone From Hollywood, Luke Walton Goes From A King To The Kings

Unemployment is one of the worst feelings.

But then again when it only lasts about 24 hours, it’s more like a day off.

Magic disappeared as Lakers president, quicker than we wish we could impeach Trump, with a Thanos snap that almost made half the young core disappear for Anthony Davis. All with as little as a press conference before telling the team. Lakerland showed us this reality show season in memes that Hollywood wasn’t even the most messed up place in Los Angeles, City of Stars anymore. But believe me between free agency and ‘Space Jam 2′ all of King James’ men, Rob Lowe, President Kobe (Dear Basketball. He said no, but we can have hope right?) and the dreams of Jeanie can still assemble an avenging team of monsters this summer. Forget 2K the Lakers could be playing video game fantasy Basketball with 4K (the King, Kyrie, Kawhi and Kevin or Klay) and let’s not forget about their real 2K, Kyle Kuzma though either. We’re no longer in the endgame now.

But this campaign is ashes like the dust on the vacant coaching staff chairs after the Lakers and Luke Walton “agreed” to part ways (sounds like a Hollywood divorce on Instagram) and everyone else followed, straightening their tie and buttoning up their blazer suit. And in an NBA Sunday that saw Durant stare down Clipper Pat Beverly and Philly look down at their navels, checking their phones in work after more upsets than those remortgaging it all on the King, it’s all change on the Lakers split bench like tips shared at the end of your bar shift. Mad Dog is even out the house. As pine legend Mark Madsen (who will be sorely missed like a family friend) has been let off the leash to coach college bball in Utah Valley (best of luck). And at this point we wouldn’t even be surprised if B. Shaw from the Phil Jackson era was no longer here too. But as the Lakers look to Monty Williams or a couple of Mavericks in Juwan Howard and Jason Kidd (although even if former Lakers player and King Coach, Ty Lue looks to step over all of this, may we suggest another successful South Bay call up in George Karl’s son Coby? If you can’t get Kobe may as well get this kid who has had the better Lakers team this year), Luke Walton hitting the freeway from STAPLES may as well have made a left turn on La Cienaga to all green signs pointing to Sacramento. As Coach Walton struck a deal with another former Laker great forgotten, probably on his phone whilst he was still stuck in gridlocked traffic.

Must Read:
CP3 done with LAC, next move?

From the King to the King’s, this year’s Hall Of Fame big man and manager in Sacto town Vlade Divac made that call, as the Lakers checked a newspaper or something to see how the man they just dumped rebounded like finding the one on a drunken night out (I don’t know, maybe it can happen). The King’s legend and former Laker big man great (yeah I said it) like Mikan, Wilt, Kareem, Shaq or Pau (yeah I went there) was literally the post Showtime era with the last tricks of Magic (sound familiar) and an All-Star backcourt of Eddie Jones and Nick Van-Exel (when this old as Forum gold writer first became a fan), before being switched to Charlotte for the draft rights of some kid from Italy. And if anyone can show the Walton’s that there’s still gold in California on another sunny side of the coast in this wild west then its Vlade.

They would have made great teammates back in the day. Which is what they’re going to be now, as of today.

This purple looks like the right by royal appointment for too for Luke’s new crown in this Game of Thrones. With even more of a young core (Buddy, Bagley, Cauley-Stein, Fox etc) than the Lakers have already gave up (theirs probably some Lakers leftovers here. Oh hai Corey) to nurture it looks like Luke’s vision with the King’s can be the same 20/20 one he didn’t get to see with the King.

Like former sideline mentor Steve Kerr of those sort of successful Golden State Warriors said on the Lakers, “they’ve just lost a great human being”. And you saw what he did with the Dubs before that former Bull was back in the interim. Sometimes you can’t just blame all problems on one man. The former perfect pass first Lakers role player from the Shaq and Kobe era the purple and gold just passed up is still going to be a great coach in this league for all the Kings men.