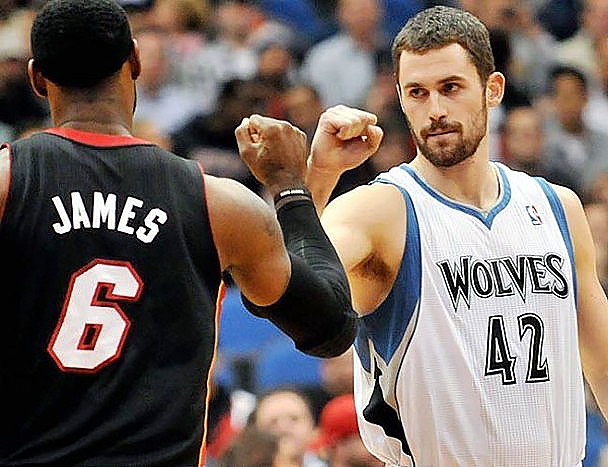 A handshake! What does it all mean today? Especially in the sports world of big business, bucks, cash and contracts.

You must have seen that scene in ‘Jerry Maguire’! You know “my word is stronger than oak”!? Well Tom Cruise isn’t the only one about to lose the top draft pick. The Cleveland Cavaliers whose future now lasts with their past, LeBron James are about to trade away their last two, lucky number one draft choices. Canadian Anthony Bennett looks set for Philly like the Fresh Prince in reverse for a blockbuster trade that will see the talented Sixer Thaddeus Young join King James new party home in Ohio. That’s just the kicker, the main part of this trade will finally see the Cavs and the Minnesota Timberwolves pull the trigger on the Kevin Love/Andrew Wiggins deal, but still with fingers interlocked three ways in a “handshake” deal as reported by ESPN things still aren’t in permanent ink.

One things for sure though in this price of Love and that’s that Wiggins will be gone too. From his jersey option on the Cavs website being embarrassingly froze out in an obvious and disrespectful Carmelo Anthony in a Jeremy Lin Houston Rockets jersey message, to the young star stating he wants to play for a team that wants him. Here’s guessing revenge wont just be served cold in South Beach this Heat-less season. Speaking of which former James teammates James Jones and Mike Miller have just joined the ‘Bron bang-wagon of fans running from Miami to Cleveland to add perimeter power to the new LeBron, Love and Kyrie Irving big three core of championship caliber that has the makings of a classic.

This handshake may all just be the formality of a foregone conclusion, but we all know how it ended on ‘Jerry Maguire’ despite being moved by that whole “my word is stronger than oak” speech.

Show me the contract!