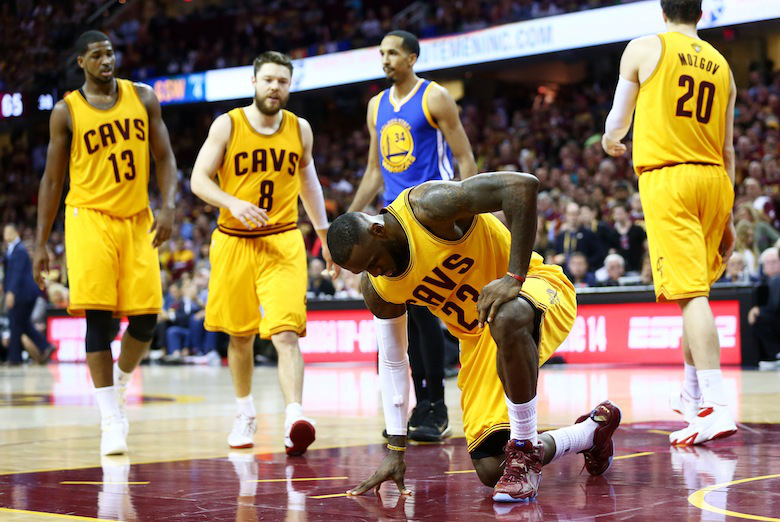 Even Without A Throne In This Game, Will The King Still Be Crowned MVP?

Come at him all you want! Throw all your rocks! He’s heard it all before and we’ve for sure seen it all before. You best believe it.

But what happens when the King misses?

First it was Steph Curry with the MVP. Now with one more shot it looks like Steph Curry and his Golden State Warriors with the victory. After Game 5’s 104-91 win over the Cavs, the Dubs have it on a plate. 3-2 up in this epic duel, with a chance to finish this series and win their first finals in 40 years of Warrior NBA basketball. Even if they don’t take the next game closer, they are sitting comfortably on a two game cushion if complacency doesn’t set it.

This see-sawing series has seen as many would-be victor changes as lead ones and the NBA’s highest ever rated series could go the full hog of seven games, which is surely what all the networks want.

Just like they want a new face for the future, in the form of the baby-smiled assassin of chef Stephen Curry. Complete with famous pops, fan-favorite mom and the cutest kid and press conference highlight in the funny and fond form of his WNBA star of the future, daughter Riley Curry.

With family values at the top of every league pass holding households list, this kid is the peoples MVP…not just the one of the greater Bay Area of Oakland, California. This season even with the heartwarming homecoming in Ohio, it seems that Most Valuable Player Stephen Curry had replaced the King of LeBron James in more ways than one. Now, armed with a bigger three in himself than LeBron’s injured special K’s, it looks like Curry is about to take James’ throne too…even if the King can still produce an upset to more than just those couch fans crying that he doesn’t have what it takes.

Even if the wine and gold doesn’t see that and champagne this year, what LeBron has done and is doing is beyond the measure of a true winner and champion. Especially without Love and all that hate, whilst holding guard without a point. The Cavs have only the brilliant but brief lights of guys like J.R. Smith and Matthew Delladevoa to go against Golden State’s bridges of Golden Gate Warrior charging talents, from Klay Thompson to Draymond Green. Even the Bay’s former All-Star veteran ball players are better as the dunking likes of Andre Igudola and Shawn Marion duke it out.

Which is why in putting on that Jordan-esque number 23 for his city of Cleveland yet again, LeBron has truly become a Cavalier in more ways than one dotted line decision. Let’s just for a second get our minds round the post headband career of a guy that even as a first-game Rookie back in the day was putting up Oscar worthy numbers.

Or we could just spell it out to you with digits…

Game 6…his whole heart and soul…

He could really be the logo now in a East by Jerry West valiant losing effort of a value most high. This icon is playing that symbolic. If you thought last Summer was the storybook stage of LeBron’s legend and legacy, than you didn’t see this coming. This is his classic chapter, his most inspired and influential incarnation. And the rest is still to be wrote. No matter what the critical ink spells out, smudged short of drying. With Jordan like highs of dominance and the rearview of Kobe’s career no longer shining in blinding taillights, this road is still LeBron’s for the taking. After showing the Big Game James of Houston’s Harden that he better keep that name, because he’s the one, true King, LeBron now has Curry left standing in his way, to move aside like he has done Kevin Durant for the last couple of stormy Thunder seasons. Now King ‘Bron is averaging finals points in the greatest of all-time, top 40 ranks and in the truth be told tale of numbers is closer to Golden State Warriors legend Rick Barry than and that the hot, can’t miss shooting of Steph Curry (that maybe shooting from those downtown San Fran sloped roads right now) should be.

Must Read:
Will It Be 'BronBall' For The Lake Show?

After it’s all said and done, LeBron is the one, even if he doesn’t have another left in the tank. In a series marked by dehydrated stars and hospitalized game winners, what is the measure of all a man’s exhaustion in all it’s blood, sweat and tears…and years? Sometimes it doesn’t add to a champagne perspired, soaked number 23 propped up by Larry O’Brien in tears. Sometimes that’s not the state of gold. Sometimes a winner is more than just the victory, the trophy or the throne. Sometimes a King is more than his castle. Sometimes apart of that army in battle, a true Warrior doesn’t have to have that wrote across his chest.

Sometimes an MVP belongs somewhere else too. Somewhere where value isn’t measured in gold rings, but in someone who by going full circle has done the most.

Now play on Most Valuable Player.