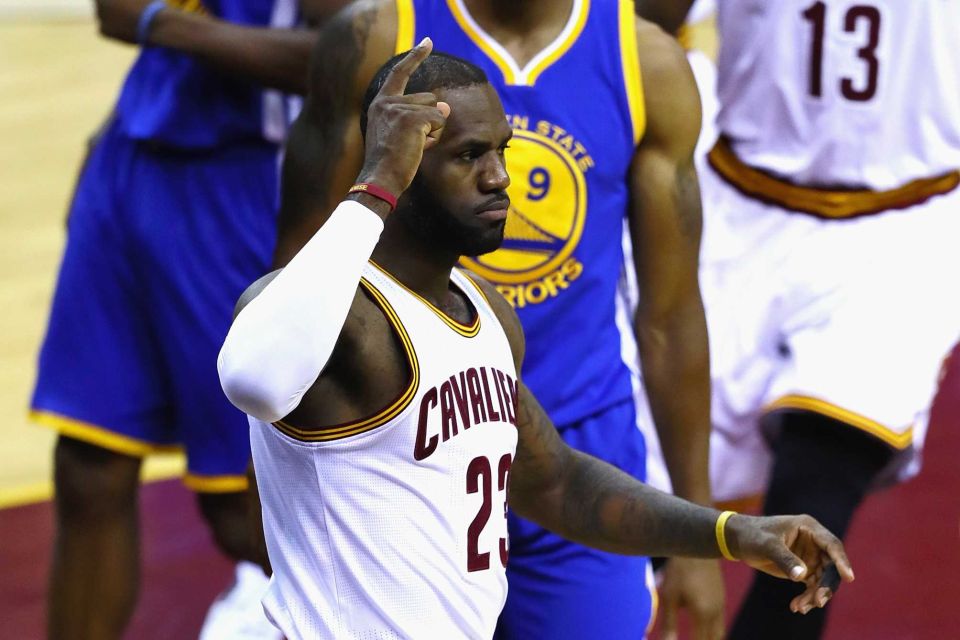 Warriors, King…There Will Be A Game 7

Nobody. No one. No team in NBA history has ever come back from a 3-1 defecit in the NBA Finals to claim the throne. But then again no one in this league is the King like James. If anyone can do it it’s Cleveland’s LeBron and all his Cavalier men. Winning one for the Land.

They’ll all cry fix. We’ll call it one hell of a series and a storybook ending.

As the two greatest players in the league with nothing between them but their two teams Stephen Curry and LeBron James went to the war of attriton last night, the momentum clealry swung back Ohio’s way as the Cleveland Cavaliers rose above the Golden State Warriors 115-101 at the end of a regulation that was anything but regular.

The King sized up another 41 point performance following his redemeption turn Game 5 duet with Poing Guard Kyrie Irving (who this game had a quieter, but still loud 26) as LeBron James became only the fifth player in NBA Finals history to have back-to-back 40 plus games. The other legends being his BIG former teammate Shaquille O’Neal, some guy called Michael Jordan, the logo of this league Jerry West and even Golden State Warriors legend Rick Barry. But in dishing out 11 assists too for a decedant double-double it wasn’t just all power points and devastating dunks for the King in the Cavalier castle of Cleveland.

Last year ‘Bron was the gif of Vine and social media jokes for his slow motion reaction to Steph Curry stealing the ball off him which even psychologists saw as displaying all the stages of grief. This year though ‘Bron blocked Curry big as the Chefs undercooked lay-up was sent back to the kitchen as the baby faced assassin was told to sit down by his King.

It was hard for Curry to take like madras two nights on the run. The Warriors leader may have had 38 points and 2 rebounds but he was ejected for the first time in his career to the tune of shouting “that’s bull####” as the Cavs wrapped up the win. Curry’s wife took to Twitter after the game to stand by her man and speak her mind. You best believe Riley won’t be happy either kids!

Shenanigans or not it’s all going to be fixed by the eye of the Oracle Monday as the Warriors and Cavaliers will face off in Oakland, California for the winner takes all final game which won’t have a name carved on the Larry O’Brien trophy until the final buzzer sounds and red neon surrounds the basket.