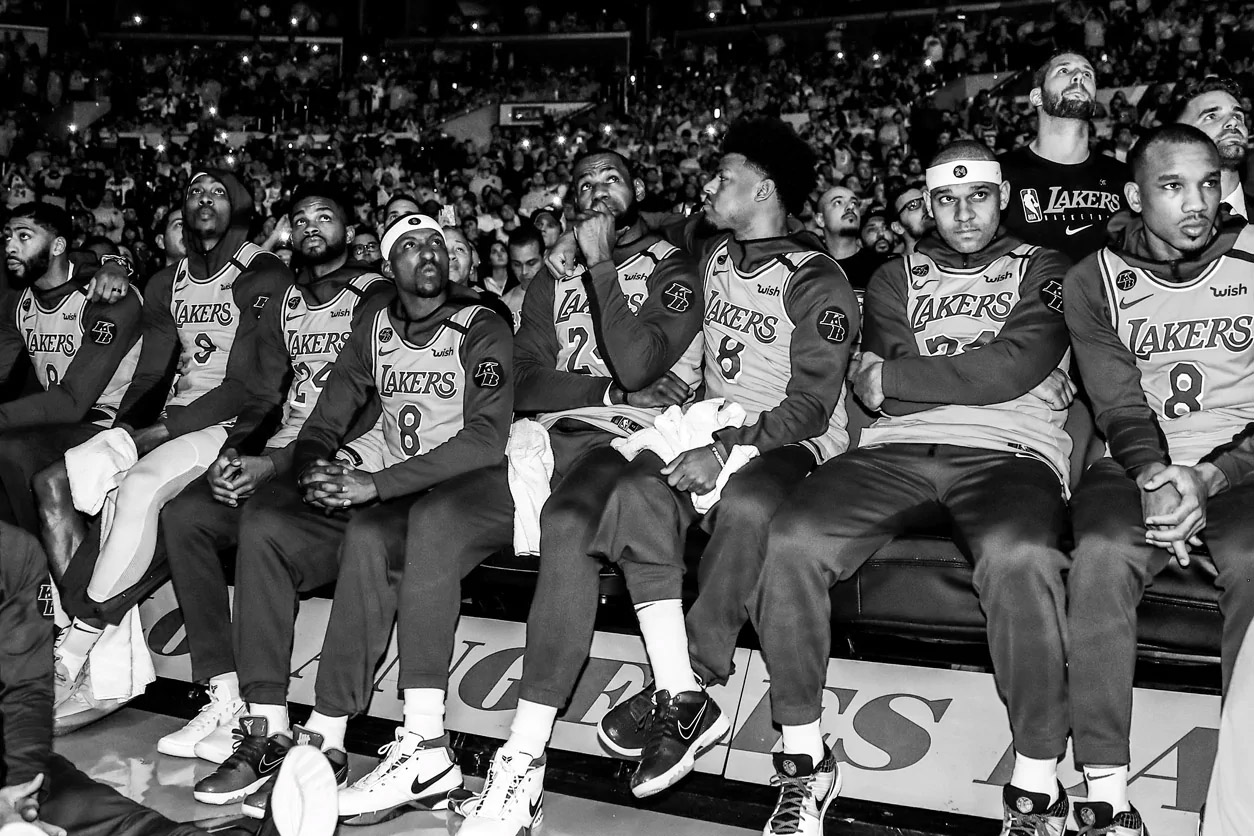 for kobe lakers blaze a trail with portland

It was all good just a week ago.

Kobe Bryant has passed away. But never in memory. Long live the Black Mamba.

This time last week Kobe sent his last tweet congratulating King James on moving past him for third on the all-time scoring list behind fellow Lakers Karl Malone and Kareem Abdul-Jabbar. But today after taking that fateful flight days later, LeBron was addressing the STAPLES crowd chanting “KO-BE” and “M-V-P”. Refusing to read what he wrote down and instead in tears shooting straight from the heart and his hurt soul. Mamba out, “but we’ll never forget you brother”.

This time last week Dwight Howard on his redemption season and reunion with former foe Bryant like Shaq was going to ask Kobe if he would assist him in Chicago this year for Superman’s return to the All Star weekend Slam Dunk Contest. Today he came to the game rocking the number 8 like he did in Atlanta.

Or like every fans seat draped with a retired 8 or 24 did like the rafters or wreath of flowers did. As Kobe’s iconic Laker jersey and the Mamba one of his Mambacita, GiGi, Gianna who also cruelly and tragically lost her life in the helicopter crash sat courtside with roses. Just like her fathers initials adorned the lapels of every Lakers shoulder like his numbers each baseline, as they stood arm in arm and tears of pain to the national anthem sung by Kobe’s favourite Boyz II Men after another R&B legend Usher gave us some amazing grace followed by a tribute video narrated by the Michael B. Jordan of acting, the ‘Creed’, ‘Black Panther’ and ‘Just Mercy’ Hollywood star.

Lifelong Laker and Kobe fan Quinn Cook himself overcome with emotion like A.D. and his London, 2012 rookie Olympic memories with the defensive Doberman guard dog. Cook stirring the heart strings as he retired his number 2 for Gianna and changed his number to 28 to honour this girl/dad trend and this father and daughter beautifully. As a classic chello orchestrated the opera of Kobe’s own jumbotron storytelling like the Oscar winning ‘Dear Basketball’ the crowd were cheering and crying for the five time, late, great champ.

Must Read:
New ATL Hawks MLK Jerseys Have A Dream

As fans lit candles and wrote tributes on the sidewalk outside STAPLES each Laker in a number 8 or 24 jersey over their warm ups was introduced as Kobe Bryant before they got underway. But not before the Lakers and their opponents Portland-on their first game since Kobe’s passing and the cancelling of the Clippers clash just days after-each committed 24 and 8 second violations in Kobe’s honour.

Normally against Portland a young afro rocking Kobe Bryant would pitch an alley-pop pass for the big man, eyes and arms raised, running back down court of Shaquille O’Neal from one of the most powerful playoff plays and historical moments for lasting memories of Laker legend and lore. But tonight in Hollywood Dame-with range like a Texan-was on perfect time from way downtown Pico (so much Clipper Paul George could see these not so lucky shots again) with a point each minute, for 48 for 48.

Portland blazed the Lakers 127-119 in a game of subdued slams and professional play still going hard like the Mamba would have mentality wanted. But the Trailblazers Twitter was gracious to admit that “tonight was more important than the final score,” with their reserve Trevor Ariza remembering when he was a championship teammate of his brother Kobe. The Lakers didn’t need to win tonight. They just had to carry on. But you know when they lift that trophy in a few months it will all be.

The game will never be the same like we won’t. But as we take 24.2 seconds of silence like the end of a song on the new Lil’ Wayne album ‘Funeral’ (remember how good his ‘Kobe Bryant’ track was as tribute back in the day) we can remember what it was like when we were blessed with the greatest player and father. Inspiring us all with rolled up tube socks, scrawled on screwed up paper to say his name as we shoot our own individual shots.