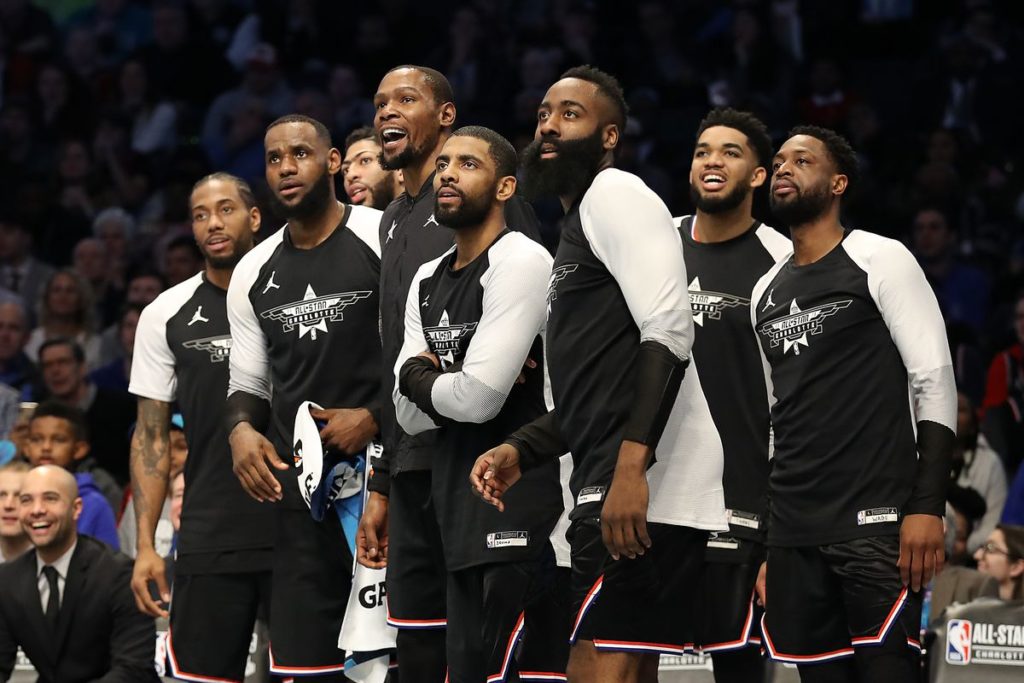 Oh Carolina what a weekend it was up North in the beautiful city of Charlotte for the 2019 NBA All-Star Weekend. The redemption of a year removed after Silver refused to play like Springsteen standing up for LGBT rights. Only for this mid-season clash in the mid-February weekend after Valentine’s to in a warm embrace show a welcoming love of all colors like the hometown Hornets’ Buzz City hive of purple and teal, keeping it as real as it gets.

And we were buzzing like bees (or should we say Hornets? Shout out to the NBA On TNT’s swarm of ‘Ant-Man and the Wasp’ like insect characters…a real Marvel) towards the traditional hexagon honeycomb in the Jumpman jumping coliseum of the spectacular Spectrum Center as Charlotte had a lot going on this weekend for its on court celebration of this culture.

First up was the Rising Stars of Team U.S. versus the rest of the World. But even without Lonzo Ball by his side, no young star rose further than the MVP of that game, the Los Angeles Lakers’ Kyle Kuzma. Although the look on Luka Doncic’s dunking face said pure joy different. Kuz controlled the 161-144 win for All Star Kyrie Irving’s young men with 35 points.

Although normally a Laker rival, the Boston Celtics Jayson Tatum also had 30 points in an aerial acrobatic affair that had more rim “brickers” than rockers. So much so that even the Celebrity Game featuring no Kevin Hart or Justin Bieber, but J.B. Smoove and Luke Cage himself Mike Colter (try running round that screen. Block or charge?) ran more smoothly and cohesive. Although they did have the jumper of Ray Allen suiting up with the 34 again.

It was one big weekend for Jayson Tatum who bagged the Skills Challenge like groceries, against the likes of Kuz a still smiling like he can’t believe his luck, Luka and a joking Jokic, who hilariously refused to shake Jayson’s hand playfully after their contest. Tatum made this X and O event much more than flogging a dead H.O.R.S.E one and done retired contest as he won against Hawk Trae Young on a knockout half-court heave that was a haymaker that made sure the rookie shooter as hot as Curry’s peach wouldn’t bear fruit.

When Saturday came, it was time for the big guns however. And we aren’t talking about the practice of the halfway line pissing contest that King James drew swords with. But the real long range contest featuring three point legends like Dirk Nowitzki was almost as good as the German gunner taking part in a legends version featuring the likes of Ray Allen once again and Dell Curry.

But nothing was as sweet as watching the stroke of his two young, Carolina born sons duke it out in-front of pops for a bet. And the only thing purer than that was Steph Curry with the same tracksuit jacket he wore as a kid on the lap of his Dad Dell, dapping up TMC Rock, Mitch Richmond (of golden era Golden State legend) on the bench. Except for of course Brooklyn Nets Joe Harris who cooled off Curry like yogurt dip to take the moneyball rack and the trophy home.

Must Read:
Damian Lillard Put Some Respect on my Name

So much for our prediction that home team hero Kemba Walker in a home-stand would take over this weekend from the three point line racks to the actual All Star Game MVP. Ah well it would have made a nice headline. But the kid K sure did represent.

And who of course could forget everyone’s (former?) favourite event the Slam Dunk Contest. After years of trying to be reinvented like the wheel it’s still the most innovative contest of the weekend. If not the purest (see above). Even though it now seems to be the ‘Lets See What I Can Jump Over Contest’ whilst trying to do my best Vince Carter impression.

Who despite the social media campaigns wasn’t on hand to dunk at 40 like he does every night as a special legend consideration here like Nowitzki and the ‘One Last Dance’ of Wade in the actual jersey swapping game. Although it would have probably been much more fitting if Air Canada was in the contest two years ago in Toronto.

Like when we only wish the trade deadline last year was a week after All Star and not before, so we could have seen Larry Nance Jr. dunk as a Laker in front of the Los Angeles crowd. Although all that was nought for all tens when junior brought out his fathers fire Phoenix jersey.

But what did they jump over this year? Quavo (I’m sorry I’m 33. Is he from Migos?), J. Cole (who even attempted a dunk himself, which was as cool as his Hornets shell suit throwback during his halftime show that put on for his state), the first ever airplane (although I’m sure despite Hawk flying John Collins from Atlanta with the Spirit of St. Louis, the Wright Brothers would be pissed off he clipped two of their wings) and SHAQUILLE O’NEAL!?!

Who whilst his son Shareef was getting some mentorship from Kareem courtside that might one day see him as the next big man great in post purple and gold, Laker legendary history (we can Hollywood dream), let Thunder dunker Hamidou Diallo jump all over him before elbowing a honey dip dunk that Winnie the Pooh reached further into the jar than the half human, half amazing number 15 from the 6.

And as Diallo came down from earth like “Is it a bird? Is it a plane?” he ripped his shirt (trust those Nike jerseys) to reveal an S on his chest Superman logo like Dwight Howard or the original Man Of Steel before him underneath the basket with the best ‘Shaqtin A Fool’ reaction. A jersey that fell around him like a cape as he flew away from new Knick high-flyer Dennis Smith Jr. with the 50 and trophy.

Must Read:
Kevin Durant feature - The Next One

And then of course it was the main event itself. But before all that another Charlotte native made this weekend is home. As So So Def soulman Anthony Hamilton coming where he’s from gave us the acoustic southern comfort of the most soulful rendition of the Star Spangled Banner of the U.S. National Anthem since the greatest of Marvin.

But in the East and West schoolboy pickup game draft of Team LeBron versus Team Giannis everyone came with those tampering jokes like the Greek Freak. One Photoshop recruitment saw Laker logos on all the switching All Star jerseys of all the King’s men. And did you see the touching photo of L.B.J. and Anthony Davis like The Creation Of Adam’ that should come with its own, “find someone who looks at you like” caption?

But despite all these A.D., Kyrie and Kawhi jokes, James’ ‘Team LeBron’ won again for the second straight year. Complete with flashes of Wade to James behind the back passes that took it back to the talents of South Beach as these partners in this saved last dance didn’t miss a step. But Steph did. And as Curry went cold for his usual fire (but oh how he was streetball playing, bounce pass, alley-oop point (even to himself) like D’Angelo to Dirk for three) like Joe Harris was still shooting (ah made you look), his teammate on the other team took over.

As A.S.G. MVP Kevin Durant and his 31 points in this 178-164 crowning win (over four quarters. You have to love the defence) showed us that Golden State wasn’t the only super-team of stars he could lead basket to basket. Even if Giannis’ giants who almost broke a century at the half with 94 at onetime blow out lead by 20. This guy got buckets like the reign many hope he brings to a New Knick state of mind. But forget New York, New York. We don’t need to talk to Kevin about that. He’s already been asked twice. This weekend was all about Charlotte.

And what could be more fitting than the 68th NBA All-Star Game in Charlotte, North Carolina being played on the 56th birthday of Hornets team owner and UNC alumni, not to mention the G.O.A.T., Michael Jordan?

Well how about next year’s game taking it to his Bullpen of the Windy City of Chicago?