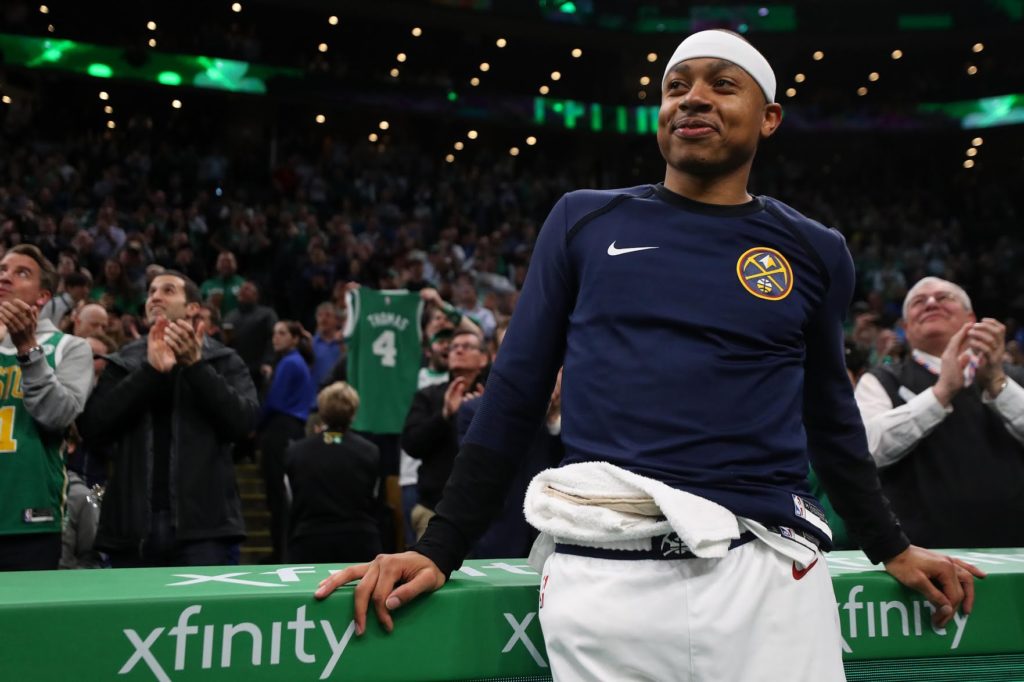 Green & Gold. I.T. Was A Special Moment With Isaiah Thomas Back In Boston

Rajon Rondo. Kevin Garnett. Say what you will but Ray Allen too from three.

Kyrie Irving, Gordon Hayward, Al Horford, Jaylen Brown and Jason Tatum. IF they can get it together and turn what looks good on paper into what’s engraved wrote read in history books for the most storied franchise in NBA history.

From the last cigar to the golden era, Isaiah Thomas belongs there like his spelt differently namesake Detroit Piston being a Bad Boy to all that Magic and Bird in the Showtime of the 80’s.

And last night in the Garden perfect parquet court was held for the return of the fourth quarter king. Since Beantown, the microwave juggernaut, spark plug off the bench has bounced around the league like drinking too much coffee. From LeBron’s Cavalier land to the Los Angeles Lakers. Always providing that brief spark off the pine of what could be and what he had here, despite being Nygma green riddled by injury and franchise business disloyalty. But last night decked out in green and gold like Lianne La Havas, special edition Kobe’s for the night that even a Laker would love (forget that never wear green meme), as he took to the floor none of that mattered.

Sat back on the scorers table as cool as Celtic green cucumber in his warm-ups, I.T. took in a fitting tribute on the jumbotron for a team that knows too that they shouldn’t have traded him (he postgame not so quipped that if they never dealt him they could be dealing with another championship in those league leading rafters right now where surely his number 4 jersey held up by fans behind him will one day reside in pride of place). Beaming with that same Celtic pride through all the pain, you’ve never seen the slow grind smile like his since he was putting in work here in Massachusetts. The big screen video took us through his fourth quarter heroics, big shots and the moment he’s overcame it all to play in the wake of his sister’s tragic death and lead his team to epic, emotional glory.

And once the ovation stood up for a call game, more than a minute of time and moment of Paul Pierce like truth tribute, there wasn’t a butt on a bleacher or dry eye in the house.

Especially Isaiah, who couldn’t contain his pride and joy. Wiping away tears and wordlessly mouthing thank yous to everyone in attendance who clapped until their hands were red and cheered until hoarse. Celtic fans are real NBA fans who recognize that green collar hard work and know a Boston boy when they see one, no matter the uniform.

Thomas on limited minutes as the golden Nuggets make that postseason push to conference contention behind the state of those dynasty reigning Warriors, only sealed seven minutes in the actual game and he didn’t make a basket for more Boston bravado cheers. But that didn’t matter in this instance. Neither did the W his new team took away on the road with a 114-105 pruning in the Garden, as the Joker and all the Mile-High basketball cards clinched a playoff berth outside Colorado.

What mattered was this beautiful reunion between team and one of its favourite players. Sure this current Celtics outfitted for the banners and Hall looks so much better on dry erase like their storied LeBron Laker rivals with the King in throne tow. But look at the Magic of Hollywood right now. With a guy like Isaiah, Boston basketball was that little bit more inspired with the iconic little man. There was a little more hoop dream hope there too. And for both city and son it hasn’t been as sweet the same since.

Like I.T. says with the last word from last night.