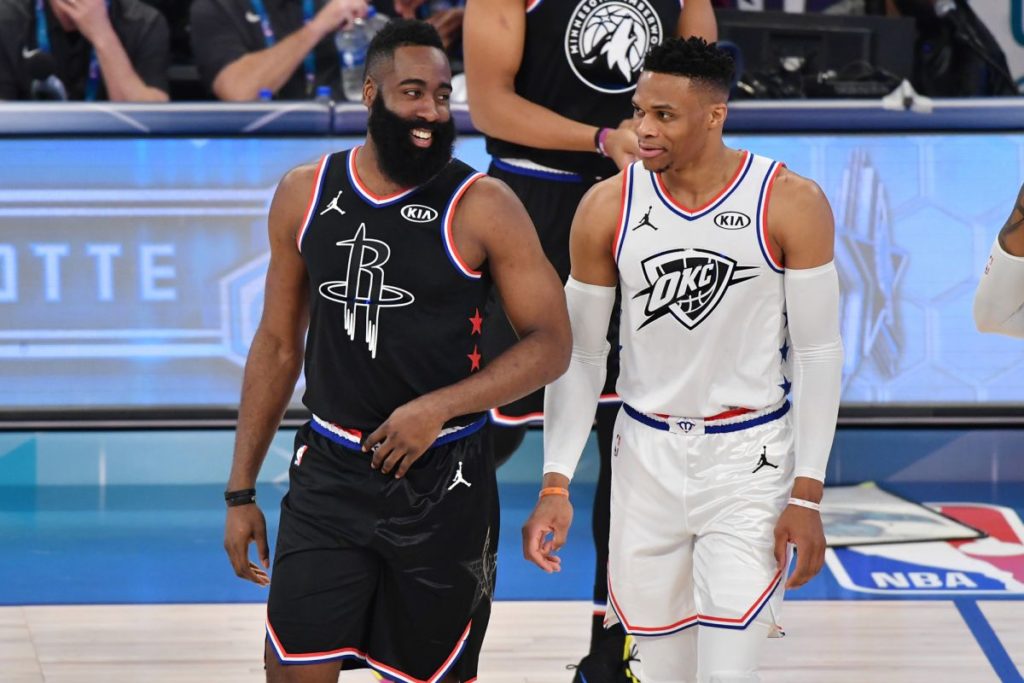 Houston, We Have A Harden And Westbrook Reunion

Just when you thought duos couldn’t get any more dynamic in the death of the big-three and superteam dynasties, Batman. Here comes another Robin.

And we thought Kevin Durant and Kyrie Irving aligning in Brooklyn for the new Nets and New York hotbed of hoops was a major move on the July 1st opening of free agency.

We hadn’t seen anything yet.

And this writer flying to NYC for a vacation that day saw so much change before he landed. Only to almost wait his whole trip in purple and gold to see where former Toronto Raptor champion Kawhi Leonard would end up. But whilst flying home last night so much more was up in the air whilst I was chasing Nike Jordan Jumpman clouds.

It all off-season of change took a new direction with the wind of what happy before the draft. The Los Angeles Lakers finally traded all their Ball, Ingram and Hart future for right now in Anthony Davis teaming up with former number 23, LeBron James. And then their cross-court rivals the L.A. Clippers said to their STAPLES neighbors, “you think thats trading draft picks and your future? You think you’re getting the Klaw?” As they gave up almost an entite draft board in a history pick axing to stonecut Kawhi Leonard and his new partner in court crime away from Canada and back to his home of California. Bringing fellow hometown Los Angeles hero Paul George onboard to the Clippers, for a duo the Lake Show have dreamed of for scripted seasons.

Leaving Oklahoma, George did a Durant on Westbrook who was finally sick of being left and decided to do the leaving himself too, asking for a trade. And despite all the big avenging blockbusters this summer like this Endgame and heated rumours of numero zero bringing his talents to South Beach to join the Butler in Miami, Houston told everyone to hold their beer as they made sure Russell Westbrook would end up back together with one player that left his reign in the Thunder. And the first one to do it too.

James Harden and Russell Westbrook reunited on the Rockets. How does that sound? Like a contender? How about Kevin Durant one day too?

Harden and Westbrook will form the most dynamite, one-two punch of an offensive duo. Volatile in its tenacity. But erratic in its championship nature compared to a King and Brow, Kawhi and P.G., Kevin and Kyrie or even the original Splash Brothers over that bridge in San Francisco. But like Borg vs McEnroe, Agassi vs Sampras, Williams vs Williams, or Federer vs Nadal in the wonderful war of wills that is Wimbledon, they are still one of the four horsemen of contention. And no duo carries as much epic excitement as the entertaining MVP and triple-double machine.

Which way round? Who’s who? We could be talking about either or when it comes to the new devastating duo of the Beard and the Brodie.

But will these two in demand ball boys who love to turn the rock into that fireball off NBA Jam really be able to coexist?

Well they’ve done it before haven’t they?

And after 11 amazing seasons as the man in O.K.C. he’s going to be more than an O.K. sidekick. Next to Kevin and Kawhi as one of the big-three best players in the league Harden can go hard against anyone. And now with Westbrook in this wild west who will certainly draw your next NBA champion (until we can talk about former Thunder partner Kevin again in the 2020/2021 season), the new Big Game, King James has a worthy ally who can go sneaker-to-sneaker with all the Kyrie’s and George’s he knows better than most.

Its going to be one hell of a season of change on court.

But its not like Houston had no problem in getting him. They had to give up a lot of assets like their own draft picks to do so. They didn’t get the zero hero for nothing. To get him they traded away the purest point in Chris Paul. Who seemingly looked already out the door anyway due to father time and rumours having a rift beyond repair with the beard. Now as the hairs on Harden’s chinny, chin, chin reunites and teams up with ‘Why Not’, CP3 is expected to be moved almost immediately by OKC and potentailly end up as a consolation prize on the same Miami Heat who thought they would get Westbrook. But this Florida franchise has a great record with flash guards in father primetime. Meanwhile the Rockets have just picked up another valuable veteran to back up Clint Capela in last years big Lakers man Tyson Chandler.

These Rockets are looking large and ready to launch.

Now this new reunion partnership, one-two punch of Harden and Westbrook gets to step out and make their professional, preseason debut in the neon light of Tokyo against reigning champions Toronto. Set to be a big, double-header exhibition in Japan, Russ can take his futuristic fashion to the hallmark district of Harajuku where he can show off his on-court style and his off-court drip to cyberpunk streets which may aswell be catwalks.

Houston, what a way to make a project runway entrance. Rocketing to the Far East like his rising sun soaring dunks.