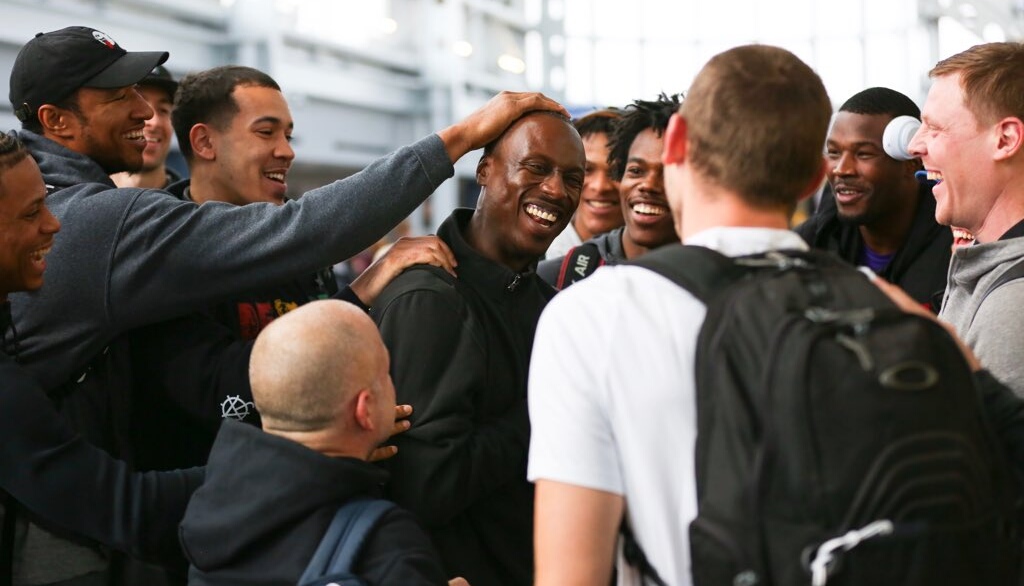 Ingram Is Back For The Lakers. No Not That One. THIS One...

He’s one of the greatest Basketball stories ever told.

And it’s going to take another 10 days.

The inspired play of Ingram is back for the Lakers ladies and gentlemen.

And we aren’t talking about the point scoring, soaring Brandon Ingram. But what you could call his unofficial, but kindred big brother.

This is the Hollywood story of G-League King, Andre Ingram. From South Bay to L.A.

Last season he made his big league dreams come true as he got called up from the S.B. development league affiliate (formerly known as the D-Fenders of the D-League) for one of the Lakers closing contests around a year ago this time. And in Kobe snakeskin black the Grey Mamba showed out. Scoring 19 points to go along with collecting 3 in each other major category across the board. It was a dream come true. Not only for the 33 year old, handed the game ball from Coach Luke Walton who proclaimed, “hell of an opening night”! And not just for every G-Leaguer on a Gatorade break waiting for that call. But everyone around the world picking up a basketball and putting it through a hoop again and again. Even though the thought they could never make it from where they from is doing the rebounding.

Andre Ingram is an inspiration to us all. And the show goes on.

From Kobe’s last 60, to Ron or Rondo’s big shot against the Celtics it was one of the greatest moments in recent and all-time Laker history. And now the Dad Drip is back to do it all again.

Because there’s no great Hollywood story anymore without a sequel (I mean ‘Bohemian Rhapsody 2’?! Really?!).

No Carmelo. No Gasol. No Morris twin. Not even a Swaggy P. With LeBron limited, Lonzo done, Kuzma out and Ingram too, the Lakers are giving Ingram, ‘Dre the open roster spot opportunity for the next week and a half. No fee agent buyout. But another South Bay call-up like “what’s up man. I’m Alex”, for a G team that’s right now more successful and celebrated than their A list counterpart (they even have cooler jerseys in those Midnight Blue Soirée Nights). A team huddled in Chicago’s O’Hare Airport around former Laker player Coach Coby Karl’s (is he ready for his own call-up?) iPhone on speaker mobbed (now that camaraderie is what makes teammates) a beaming Andre as he got the call from General Manager Rob Pelinka. As he shook his graceful head in grateful, unbelievable, emotional response like a man who was getting this call for the very first time again. Let alone a second. You’ve never seen genuine joy as pure as this as he had to take it in again for a second. Knowing for the next third of a month he’d be rocking the real purple and gold in downtown Los Angeles. All this from a man whose overcome so much. Even coming home to America after playing in Perth, Australia due to mental health struggles. His ‘Men To Heal’ emphasised, worded hoodie says it all really and in turn is everything. Get it!

Must Read:
In Loving Memory Of Kobe And GiGi

And now you know everyone will be copping his jersey like the last time the number 20 was worn here by a famous face in Point God Gary Payton. Hoping this G King instead of LeBron gets the final shot to make this story complete.

But this isn’t the closing chapter. His story that is only just getting started goes on. Unifying the bench and all the Hollywood drama this reality show season more so than a LaVar Ball episode, forget what you’ve heard. Forget about Anthony Davis. Forget about this being a fan PR stunt to smooth over all the cracks in the crown like some cynics say. Forget if Coach Walton will soon be replaced by another former Laker teammate, as Tye Lue looks to reunite with LeBron. Step all over that for one last shot.

This A.I. may be the answer a questionable Lake Show needs to go on.

And we can’t wait to see how it all plays out.

Because in this flipped script Hollywood rewrites in the City of Lost Angeles no one will ever forget about ‘Dre.

Get ready for the next episode.