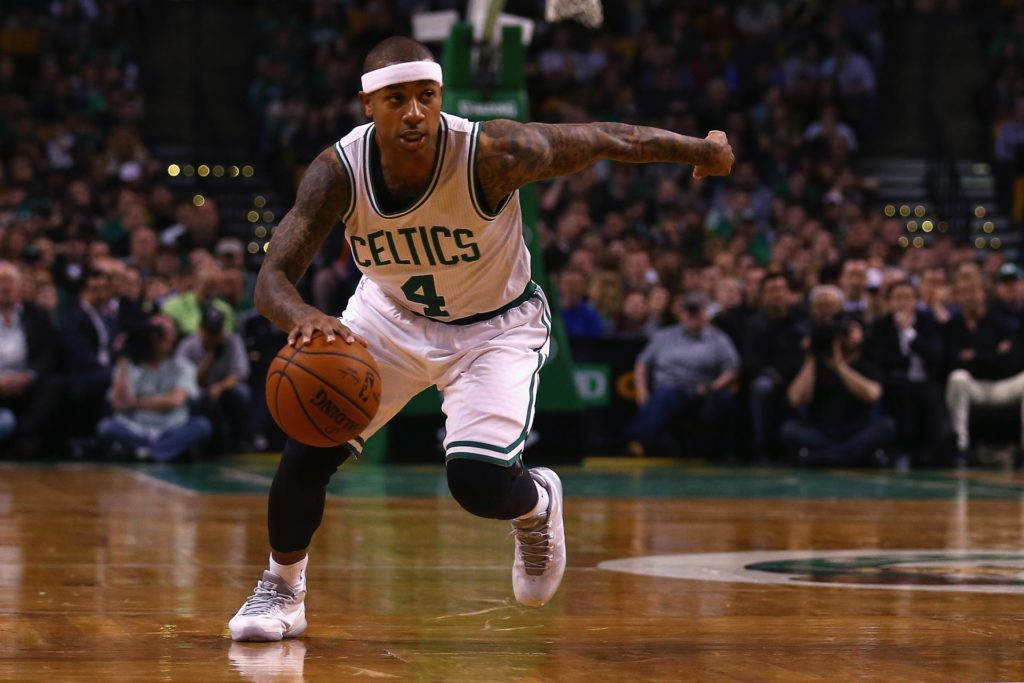 Isaiah Thomas Ii The It Generation

Back in the day of the Showtime 80’s, as great as they were the Boston Celtics would have loved a floor general as savvy as Isiah Thomas, even if this Detroit Piston was a Bad Boy for life.

Now some 30 years later when kids growing up watching number 11 are now full grown adults and pros themselves the luck of the Celtic Irish finally has their man.

They finally can call Isiah Thomas their own…

Because this young number 4 is going forth and making the I. Thomas name all his own…even when it comes to NBA greats. Sure Zeke was one of the best to ever do it during his time in Motor City, but Beantowns’ finest wants to go down as one of the greatest small guards this game of giants has ever looked down to see.

He already thinks he’s the best in the league. And even if he isn’t that B.I.G., he’s the closest one. So don’t think little of him now. Even the chosen one LeBron James thinks he’s a clear cut star. Passing the shamrock, Celtics great Kevin Garnett all the way in his Area 21 bunker has him in his MVP discussions. Even heavyweight champion Floyd Mayweather wants a piece of him. His game worn jersey just had to do. Now tell me that isn’t Most Valuable player!

Information is power, especially in this tech savvy world of today and social media and all other outlets have spoken. It’s the I.T. crowd now. Even if no one knows who the hell voted for America’s new President, it’s clear when it comes to the Atlantic corner of the East, Isaiah Thomas is a bonafide All-Star. Even if this statistical Skittles popper, crushing categories like candy is coming off the bench. Hey Russell Westbrook’s doing it out West and this Thunderous triple-double machine just passed Boston’s best Larry Bird on the all-time list. Besides the coaches know best. How many more would you really run plays for over Isaiah?

Expect Thomas to fly to the rafters of banners he’ll put up as the next storied Celtic great in a legendary lineage of legacy makers from Bill and Bird to The Truth and Da Kid. A name like Isaiah Thomas sounds like he could hold hall and a place of infamy next to the likes of Bill Russell, Bob Cousy, John Havlicek, Larry Bird, Kevin McHale, Dennis Johnson, Kevin Garnett, Ray Allen and Paul Pierce. Red would have been proud to see this young man in Celtic green.

Knowing that’s the only color this game really bleeds, even when the Washington Wizards came dressed in black like a funeral procession for a revenge rematch after some petty post-game nose poking. As Thomas said competitively, but dismissively best…”that’s cute”!

Isaiah Thomas is such a part of Celtic pride now he’s even in the Matt Damon produced Academy Award favorite film ‘Manchester By The Sea’ starring Oscar ‘Best Actor’ nominee and hometown hero Casey Affleck…albeit in some off and on screen highlights. But he is in the movie in two separate occasions, the latter showcasing his signature lay-up off one of his drives to the basket as beautiful as Back Bay on the first day of May.

Thomas is the reason the Celtics aren’t tanking. Sure they have names like Sullinger, Crowder and Olynyk, but Isaiah Thomas is just that much more legendary a moniker.

Just make sure you spell it right!