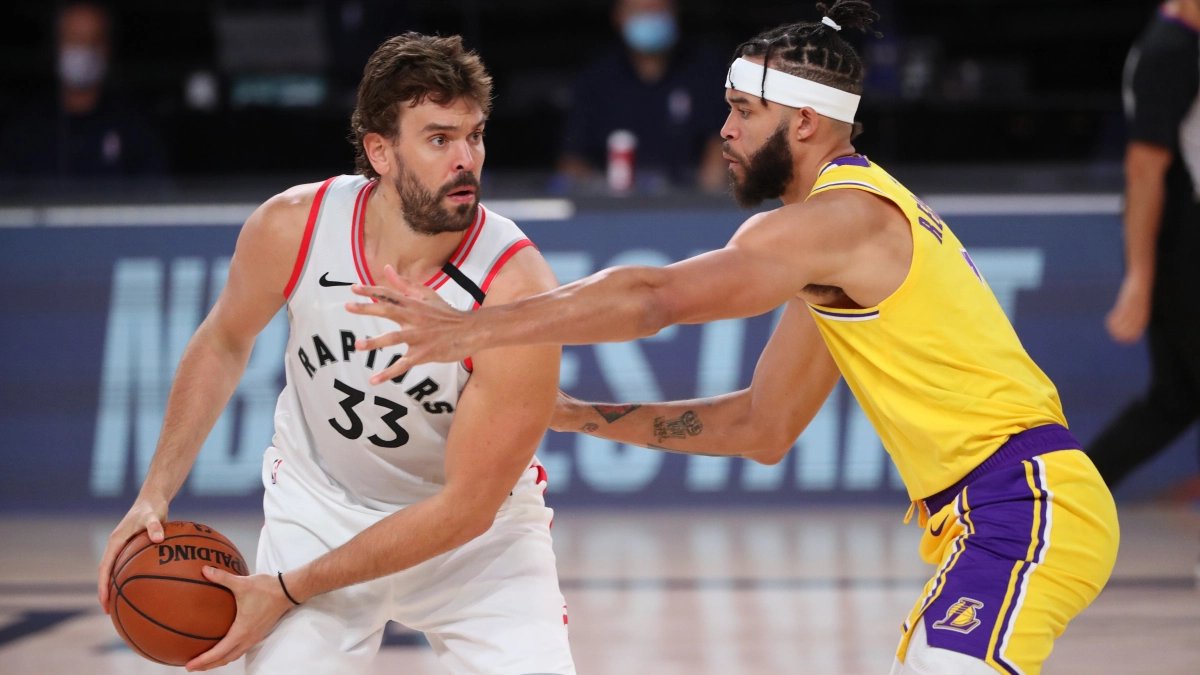 Hollywood, I know what the Lakers did last summer. They lost big man DeMarcus Cousins to injury after just picking him up off the free agent market and then went after former player Dwight Howard like they had long term memory loss.

Back then everyone was screaming “soft” like Kobe Bryant back in the Rocket reunion of the two former teammates and foes. Turns out it was all scripted though like a Hollywood ending. As after asking for the late, great Black Mamba’s blessing, Jeanie Buss made a major move for Dwight Howard that turned out to be one of the best things the Lakers ever did.

Fans no longer joked about his tarantula hair, or dreaded the move, as the all dunking post presence had a monster year off the block. Forming a three headed Ghidorah monster for the Lakers in the paint with free agent hold over JaVale McGee and of course superstar Anthony Davis.

D-12 rocking the 39 like the numbers big man Laker legends do. One he should have been back in the past and then became in the end. Helping the Lakers win a championship for Kobe. Rewriting his history in the process as he proved us all wrong. Making sure our apology was as loud as the disrespect.

Talk about a redemption season.

Now one of the literal biggest Lakers of last year is in Philly though with the Sixers, after LA in typical not knowing how to handle their players fashion let Howard’s end play out as they left him waiting on the phone with a couple of million on the table. The same couple of million they saved by waiving guard Quinn Cook who loves the Lakers and the Bryant’s so much he changed his number 2 to 28 following Kobe and GiGi’s tragic passing. If the Lakers didn’t think there was a good enough reason to retire the number 2 for Mr. 0.4, Derek Fisher back in the day, they should do now for the Mambacita.

So Howard’s redeem season is now complete, even though we feel the man should have been paid to complete and close out his career with the Lakers. Still, he’ll always be a champion dipped in purple and gold for life and now he’s rewrote his Laker legacy. Howard may have only clocked two total separate seasons with the purple and gold, but his tenure will go down in Hollywood history as one of the greatest Lakers stories ever told.

Even if he does walk with both Rajon Rondo (the pure point we thought was going to end up coaching like Kidd for the Lake Show), Playoff Rondo and defensive stopper Avery Bradley. The Lakers have lost a real one with Avery too. Putting that work in early season to be a catalyst to why they are now champs. Those giving him mess now he hasn’t re-signed for skipping the Bubble to protect his son are chumps.

Losing the likes of these and back-to-back champ Danny Green-who off the ball and with more big shots than people give credit for (once a Laker, never a hater) was a key piece, making key stops in the Lakers championship run-would make you think the veteran Lakers have turned this storytelling championship chapter into a Hollywood divorce. But no. This is the reboot. They’ve gone from being the Californian San Antonio Spurs to a gangster Showtime.

First they traded Green and the 28th pick in last week’s draft for last year’s Sixth Man of the Year and star in the making, Dennis Schröder. Who like ‘Lakers Film Room’ on Twitter said is the best scoring point these Lakers have had since Nick ‘The Quick’ Van Exel.

Then after cashing in on the perfect role player in the Bucks Wesley Matthews Jr. (his father won with Magic during the Showtime 80’s), the team finessed the Clippers for the actual reigning ‘Sixth Man Of The Year’, Montrelz Harrell, which left former Laker draft pick Patrick Beverley emoji fuming on Twitter. This hustling major move more than makes up for the loss of Howard and maybe even the possible one of Markieff Morris joining his twin Marcus across STAPLES.

Rob Pelinka’s wasn’t done however like his lookalike Rob Lowe returning to ‘The West Wing’ for a quarantined, theatrical remake of an episode at the Orpheum Theatre in downtown Los Angeles for Michelle Obama’s ‘When We All Vote’ campaign. After getting his damn respect and six man, the GM of this new year of basketball went after the former ‘Defensive Player Of The Year’ and champion in Canada with the Toronto Raptors, Spaniard Marc Gasol.

With Howard gone, the Lakers got bigger and better in backing up Anthony Davis in the paint. The legend of right now and hopefully the future, who they hope to re-sign as a formality with this insurance policy and the big bucks they hope to throw at him after doing the same in retaining the third best player of the playoffs, KCP for three.

Many people thought the Lakers made a steal when they brought former ‘Rookie Of The Year’ Pau Gasol in back in 2008 to form the next dynamic duo of Lakers legend with Kobe after Shaq and before what we have now in ‘Bron and the Brow.

All they had to give up was a former number one pick, but a number one pick that despite having a decent season was Michael Jordan’s infamous Washington Wizards choice of Kwame Brown (let’s hope he hasn’t made the same mistake with Charlotte and ‘Melo), the rights to former’ Sixth Man of the Year’ Aaron McKie and a rookie point guard in Javaris Crittenton, who was promising until he brought guns to the locker room in Washington with Gilbert Arenas.

It turns out that wasn’t, although as the Lakers also gave the rights to so much more to Memphis in order to obtain the Grizzlies star Pau, who had been with the franchise as its face since the former Vancouver teams inaugural season in Tennessee. It turns out they traded Gasol for Gasol, giving their draft rights to Marc (who was still playing in Spain) for his bigger brother.

Years later the Lakers would regret this part of the move as the two Spanish Bulls would make national headlines as outstanding Olympic athletes in the summer when Marc wasn’t helping redefine Memphis and the Grizzlies as a new era of Grit N Grind.

The Lakers even had a chance to sign a prime Marc Gasol before The 6, but the younger brother refused because of how the Lakers treated Pau like trade bait during his later years. He probably also had some Pat Bev hard feeling from his draft to pass time on and off the Lakers books too.

Now it’s all good again as the Lakers finally redeem themselves by adding this Olympian to their team. Even if it did come at the price of clearing cap space by trading JaVale McGee to the Cavs for Jordan Bell and Alfonzo McKinnie who will probably end up cut by weeks out (although the Lakers should probably give their first Jordan since Clarkson a chance).

McGee after exercising his option and choosing the Lakers over his pick of other teams deserves better. Even if this is a business. He was a glue guy whose epic energy and enthusiasm, hustle and heart were with King James California taking talents from the start.

The Lakers could go one better though after making it right with the brutal blocking and perfect passing Marc (who is coming off averages of 7.5 points, 6.3 rebounds) and signing him to a two year vet minimum by signing another Spaniard too.

His brother Pau. It’s not like the two brothers won’t be spending a lot of time together in Los Angeles like the Morris twins quarantining together. With Marc becoming an uncle to Pau’s baby daughter spending time together like the “better friend” of Kobe has been to the Bryant girls. It would be a grand gesture to complete this redemption. One that would let the bona-fide Lakers legend yet to receive his flowers retire with the team that traded his brother for him all those 12 years ago.

It’s funny how things come back around.

Now THAT would be THE Hollywood ending.