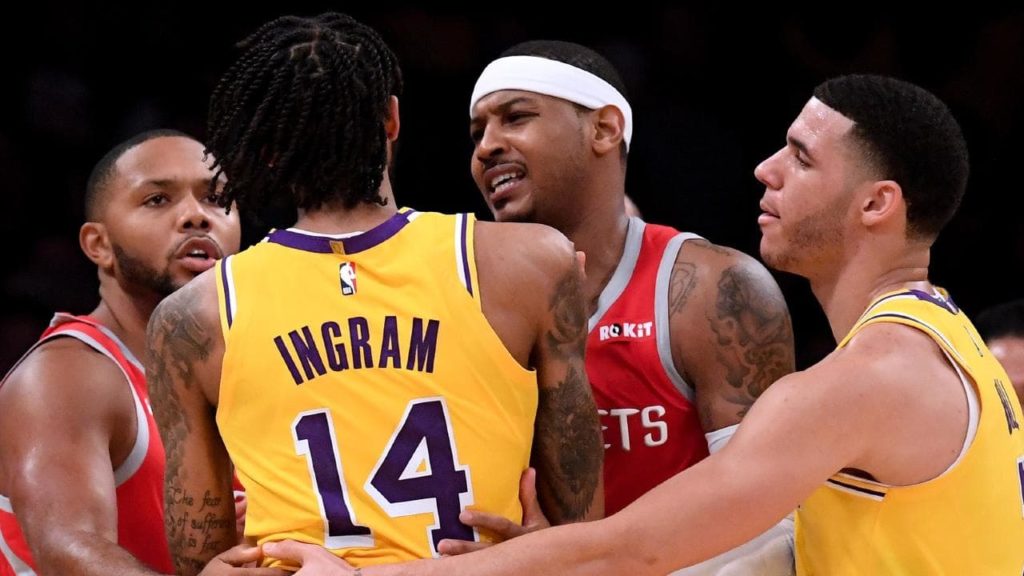 It’s Time For The Lakers To Get ‘Melo

There’s a place for you and La La in La La LeBronland.

Carmelo has finally been released by the Rockets. After problems in Houston resulted in a failure to launch this season like when Matthew McConaughey was still doing romantic comedies. But like the ‘True Detective’ and ‘Dallas Buyers Club’ moviemaking star, Carmelo will have his McConaissance too…call it the ‘Melonaissance’. We’re coining it like Mario.

Last year the former King of the New York Knicks was trying a new OK3 big-three with the best of friends Paul George and Russell Westbrook. But now ‘Melo may do what PG-13 never did, despite all the promise. Anthony’s time after leaving the Madison Square Garden to the Mecca potential of Kristaps Porzingis for the Thunder didn’t produce reign like it could with the purple, but it was still a pretty decent shower in need of umbrellas like a…A! And despite the DNP-CD’s and eventual iPod in the locker room playlist time instead of playing ones, he put up decent 13 and 8 numbers in H-town, which stands for Harden’s town. Behind both the beard and CP3 at P.G.

And now with the Lakers missing points with Lonzo joining Rondo on the inactive list for 6-8 it’s time for the Lakers to make one. Toxic? Bad team player? Carmelo Anthony is none of these things. He’s being scapegoated. Singled out. It’s a classic case of assigning blame instead of feeling shame. We’ve all experienced the fallout of getting the rough end of a parting of ways. But it’s no reason to do this. We’re disrespecting one of the games greats. But now ‘Melo has been traded with some cash money to Chicago Bulls, what once would have made headlines as a master move will now see Anthony log less time in the Windy City then he did in Atlanta. He probably won’t even have time to have a jersey mocked up for the Twitter timelines like the Hawks did hilariously. This is purely a money move. But this Olympic Gold hero is still dollars. It’s time people saw sense.

LeBron wants to finally unite with the man who came into this league the same year as the straight out of high school phenom as a net cutting down, college ready rival for the throne. But as the former Nugget went from a Syracuse Orangemen to the orange, white and blue of New York, this Cleveland hometown hero took his talent and rings to South Beach and back to become the one, true King. The debate for the great is over. But together they could really do something special in their twilight time in Hollywood worthy of a blockbuster script. A wine date in NYC gave us a taster. So swill on that.

Even with LeBron himself and Rajon Rondo in spitting distance (‘Melo got a front row seat for all of that in the opening act of the Rockets/Lakers melee) of a return, the Lakers have been the dribbling wounded all season. And all the fans who demand a trade for Anthony Davis (who-be smart-is free to walk this Summer either way) want change. Unhappy with the way the should be untradable young core are playing. Give them a break…do you forget the name of the player who still at this point in his career was shooting airballs?

He was called Kobe.

And we all know how that worked out.

The core of the draft-wells Kuzma, Ingram, Zubac, Hart and Ball playing with one of the G.O.A.T.S is the equivalent of high schoolers studying with a college professors masters. The benefits and learning pains are unquantifiable statistics that are off the charts. But adding ‘Melo to the ‘Stranger Things’ meme team of big time buckets from Michael Beasley, Lance Stephenson and McGee could measure that all out, getting more in the cylinder too in this former All-Star winning company. Especially if they (will with this pick-up) make the playoffs. It would be as crucial key a vet injection like Tyson Chandler and what having Trevor Ariza return could have been. Even if they have to cut one of their two-way South Bay stars to make way. I’d be all like Wolverine with all that. I want to see Anthony play in purp as bad as Ryan Reynolds wants the Greatest Showman, Hugh Jackman back in blue and gold. Add this X-Man looking to be a Big Apple to Hollywood hero and this marvel could help Showtime run again.

You think ‘Melo’s done? Calm down!