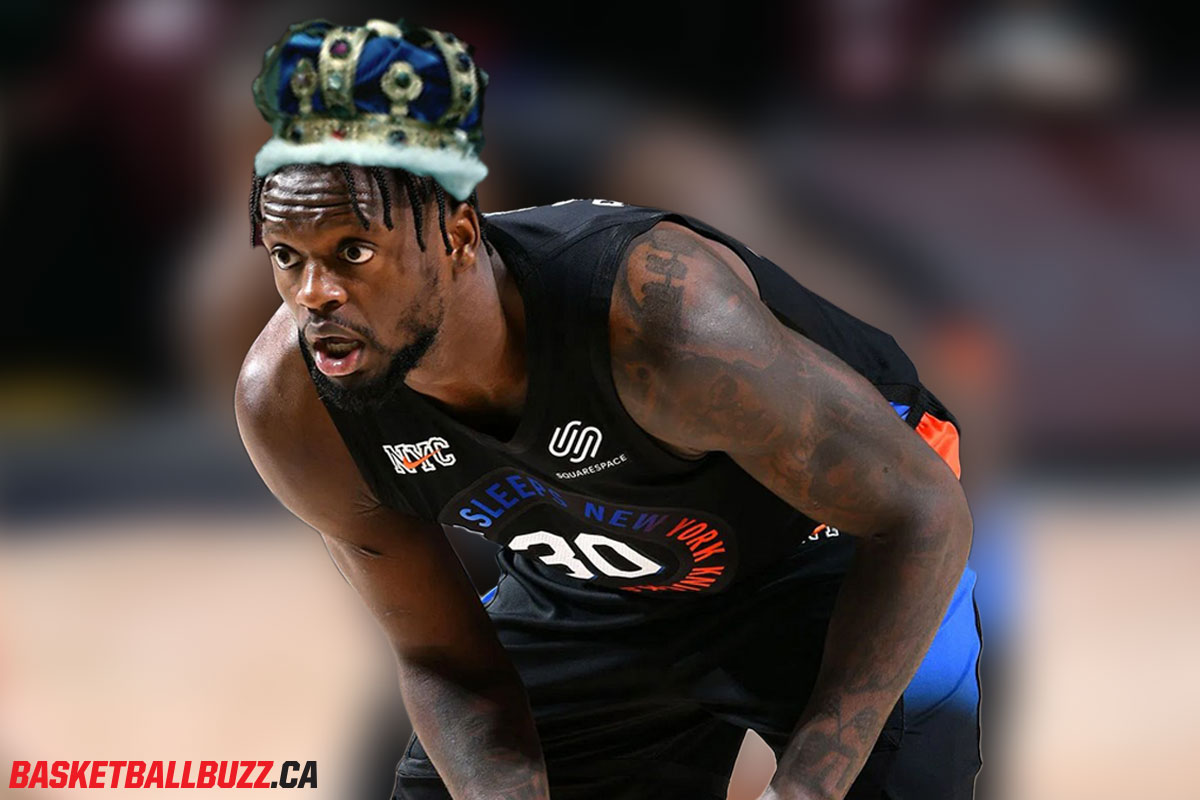 King Kong ain’t got you know what on him.

Julius Randle is so good, we had to crown him twice.

But you best believe the number 30 he is making his own, already belongs in the Madison Square Garden rafters for the original King of NYC.

Bernard King once took a spot below the Brooklyn Bridge with the World Trade in the Manhattan skyline background across the Hudson. Sporting a crown and regal robes to go with his signature Converse Weapon sneakers and nickname.

He’ll always be the one, true King when it comes to Knickerbocker glory, but its time for a new big New York player to ascend to the throne.

And who better than one who left Hollywood after another King left his Land to claim the Laker one in tinseltown as his own?

Spreading his almighty wingspan across the Mecca, Patrick Ewing was New York basketball in their hard nosed golden era alongside Larry Johnson, Charles Oakley and John Starks. Later on the slashing Latrell Sprewell and spot-up Allan Houston. He was so good even the Monstars of ‘Space Jam’ stole his powers when they thought they could beat Michael Jordan.

After the Ewing era, Syracuse college star Carmelo Anthony came home to the orange and white, trying to form a new dynamic duo with Amar’e Stoudemire. But no matter how long the Knicks tape played, we all know New York’s luck is as rotten as old apples in the big city of dreams.

Then came what could have been with Kristaps Porzingis.

But it’s a new day for New York this year.

Julius Randle is handling everyone right now. The first-time All-star never sleeps like the instantly iconic city edition jersey circling across his chest. Never taking a day, or even a play off.

Must Read:
Look What The 2016 NBA Draft Blew In

It’s that Mamba mentality forged from years of watching and being mentored by Kobe Bryant. Both on the court and on the sidelines after losing his rookie year in Los Angeles to a broken leg on his opening night debut. Just look at him joining the Lakers huddle like he still played for them (they wish) in his recent win against his old team. Listening to the drawn up play and then steal swiping and breaking it apart when it played out in the game.

For all the former lost Lakers that are getting paid and their own way, balling out in this game. The new All-star’s of the last two seasons Brandon Ingram and D’Angelo Russell. Six Man of the Year shoe in for sure, Jordan Clarkson. It’s Julius Randle who is really coming up the biggest in the big city of dreams.

Not content to have stayed in New Orleans with the Lonzo Ball led trade package that gave the Lakers’ Anthony Davis. Going out on his own, it’s a New York state of mind now for Randle.

And to think we all thought the future of Canadian basketball, RJ Barrett was going to be the man in the Big Apple. Yet the Maple Mamba can still be so. Forming a one two punch that’s going to knock everyone out like when LL Cool J’s mama told him too.

You thought New York basketball was all about Steve Nash’s Brooklyn boys of Kevin Durant, James Harden and Kyrie Irving. But when it comes to Randle, you can’t handle the truth like a few good men.

Two summers back New York thought Kevin and Kyrie would suit up together in orange, not for the former New Jersey franchise. But now that doesn’t really matter. Randle has reversed the jinxed Knicks bad luck that even couldn’t win in the lottery. He is the big ticket like Kevin Garnett. Their best post player since the post-Ewing days of Marcus Camby. What they wanted back in the iconic draft class of ’96 with New York’s Rochester and Syracuse standout, acting in Spike Lee movies and having Nas perform at his draft parties, John Wallace.

Must Read:
'The Truth' Will Be Set Free This Season

Leading New York to five straight wins for the first time since 2014 off of four straight 30-point games. Randle has become the first Knick since ‘Melo 2013 to have multiple 40-point games in the same season. In the Knickerbocker orange, Julius is something else entirely. The current NBA Player of the Week is averaging 23.7 points 10.5 rebounds, 6.1 assists and 2.1 three-pointers made off 40 percent shooting

All those career-highs are elite numbers and in the company of fellow big star Nikola Jokic and the legend of Larry Bird, he is only one of three players to average 20, 10 and 5 off 40% percent shooting.

Most Improved Player of the Year? Nah! This guys in the MVP rankings.

Even if there are no fans in the stands right now, you know number 30 has already earned the Garden faithfuls respect. And that’s no mean feat.

When they’re back in the bleachers it’s going to be over.

Julius Randle already has the crown. Now in this fight for NY the next Subway stop is the throne.