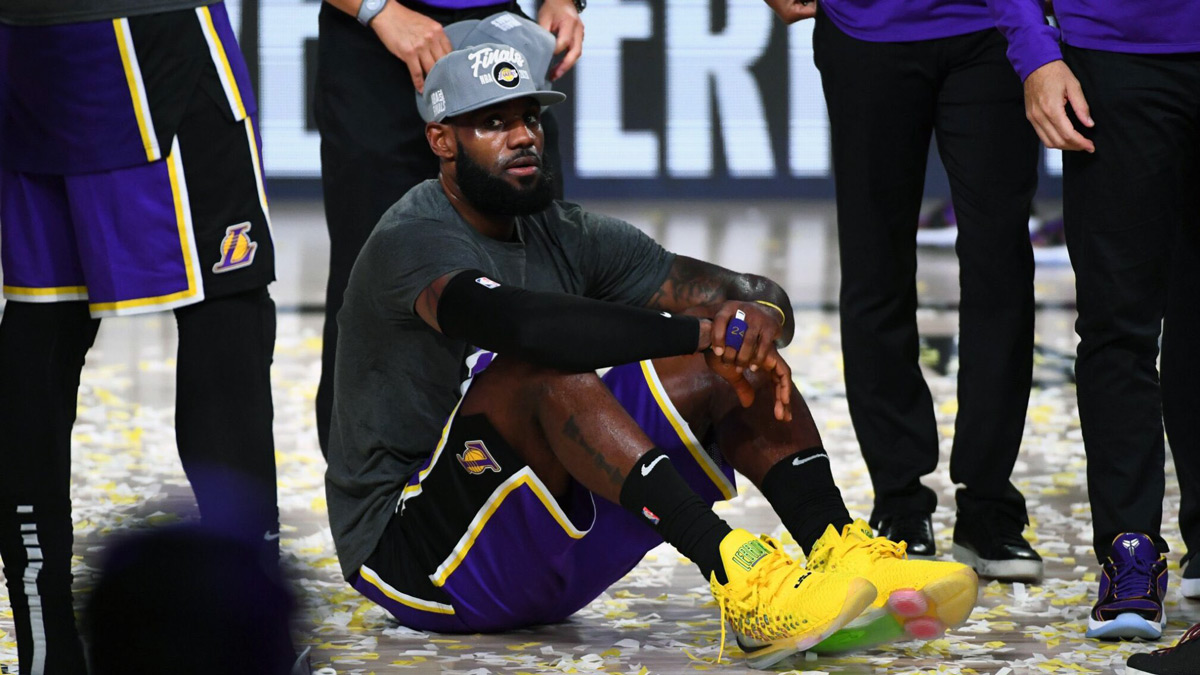 We are the champi…not yet Queen.

Just look at the King, sitting on the floor surrounded by confetti like Kobe in the Philadelphia locker-room shower alone with Larry O’Brien in 2001, soaked in champagne. Or with arms folded at the last Lakers Western Conference Championship presentation. Both, looking in introspection for perspective.

Or a deeper focus.

Right before LeBron James to be Frank reiterated what Coach Vogel said in the presentation of the 2020 trophy, “the job is not done”.

Although, “only 30 teams get here every year” and the Lakers will “enjoy this tonight” this Silver ball is not the gold. As in year seventeen (17) the “washed” King leads the sixteenth (16) time, storied NBA champion Lakers to what could also be their 17th.

To think this kid from Akron only got sixteen MVP votes.

Who’s the Most Valuable now?

Like Anthony Davis beautifully and brutally blocking what would have been a dunk of the year from Michael Porter Jr., some think the real Defensive Player Of The Year and MVP belong in LA, but you have to respect Giannis doubling up.

LeBron had his 27th playoff triple-double with 38 points, 16 rebounds and 10 assists in the 117-107, Game 5 win over Denver to lead the Lakers to the promised land for the first time in a decade. Since Kobe went at it with ‘Melo…and the Nuggets again in another classic Wild West showdown.

This now being the King’s tenth (10) final appearance in his seventeen (17) years. Only Celtics legends Bull Russell and Sam Jones with 11 and that many rings have more. 23 with nine finals in the past ten. Before that it was the Lake Shows time like 24.

Must Read:
Houston Rockets Claim They Have 'King James' After Big O.T. Win

Since the new millennium there’s only been four-years since neither the Lakers or LeBron have been in the NBA Finals. That’s two decades!

As per CBS Sports, at 35 Jordan was retired, Bird limited to 45 games, Shaq traded and Wilt (who used to average 50 and scored 100 points in a single game) held to a 14.8 average. As for the King? You’re witnessing it now.

From the Butler serviced talents of his old South Beach land, to the storied rivalry with the Celtics. No matter who wins between Boston and the Miami Heat in the Eastern Conference Finals will make for a classic closing chapter to this year’s NBA Finals in Florida’s Bubble against the legendary legacy making Lakers.

Still, respect where it’s real recognizes real due, how about those Denver Nuggets? Wishing the Lakers well on Twitter and being as professional an organization as they are an incredible team.

Canada’s very own Jamal Murray (19 points, 8 assists and more injuries than you could count) in tears left it all on the floor like the George Floyd and Breonna Taylor tributes on his sneakers that he did it all for. Fighting to the end.

Whilst ‘The Joker’ Nikola Jokic held all the cards (20 points) as a formidable front-court force that only Anthony Davis and Dwight Howard together could try and contain.

This isn’t a case of ‘Things To Do In Denver When You’re Dead’ like the Andy Garcia movie. They were almost the West’s best like Travis. Forget the Clippers and the battle of Los Angeles. Here’s why you should be as scared of the Nuggets as I was.

They are more than the dynamic duo of Jamal and The Joker. They may just have a fantastic four. Just look at how good the kid, Michael Porter Jr. is.

It ain’t over either. How about Jerami Grant? The son of Harvey and former Laker champion Horace’s nephew. He was huge this series and is on the verge of stardom, finishing Game 5 with 14 points in the third, en-route to 20 points and 9 boards. Almost doubling up and showing the golden Nuggets were more than two bites.

Even Mason Plumlee was rocking the reverse pretty plays to show this team is deeper than you think, just like it’s history.

Notice there’s no memes about this team? That’s because they’ve earned everyone’s respect. Even the NBA King’s.

Yet the team that made history overcoming two 3-1 deficits couldn’t do it a third-time against the man that rules those series scenarios like he does big dunks and blocks on either breakaway end. The shades and headphones meme belongs to LeBron only.

What a run. Time to catch up because Colorado will be in the air next year. Let’s hear it for Mile High Basketball. Here’s to them. It’s not over.

Still, hold on, the Lakers are going home.

All from 23 that will be right there alongside the next digit in the rafters when he retires if he lifts this next banner.

Now that’s how LAL will ‘Leave A Legacy’.