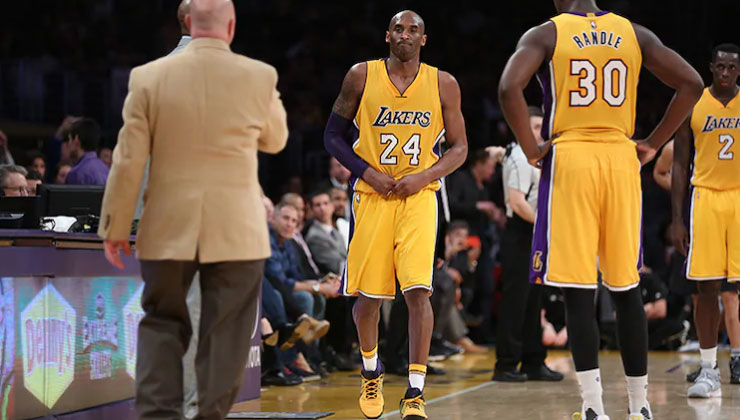 In 2013 Kobe Bryant tore his achilles during a game against the Oklahoma City Thunder. We all remember it as he tried to excruciatingly push it back into place before getting back up, sinking two free throws and walking off court, back to the bench, no wheelchair, all himself for his last game of the season.

In 2015 Kobe Bryant tore his shoulders right rotator cuff during a game against the New Orleans Pelicans, ending his season again after just coming back from one. No matter the pain, Kobe tried to play through it all, making plays and points with one arm before he was taken out of the game yet again for a campaign.

In a game against the San Antonio Spurs the other night, Kobe Bryant dislocated his finger whilst hitting the hardwood chasing down the rock. Sure painful, but not as jarring or season ending (the X rays came back negative people) as the other aforementioned ailments. Nevertheless it still hurts like hell, especially when you man up and show what you’re really made of as you get it popped back into place and continue to play…and play well too.

Now you’ll never need to relocate the fire in this mans heart.

Tim Duncan may have stated he had “no emotion” in the veteran legends last meeting with Kobe Bryant who had 25 points, like winner Tony Parker in the Lakers 119-113 loss to San Antonio, but it was Kobe who showed none as his finger was pushed back into place. As legendary team trainer Gary Vitti took Bean back to the bench, huddled with him, counted to three and then jerked the digit back into its socket on “one” (classic, old school treatment techniques), you could feel the love as Vitti gave Kobe a comforting, attaboy neck slap. This made for not just one of the night, but the years most endearing and enduring moments that will last in legacies memory. As besides Bryant isn’t the only Lakers legend calling it a day this season after so many years of dedication…Gary is too.

And if you bleed purple and gold on the trainers table you just know what all that means.

You just can’t doubt the Mamba mentality or count out the down but by no means out all-time All-Star. And if you do he’ll use this cast splint opportunity to hilariously flip you off like he did the media post-game. Retiring and out of the playoff picture, but still playing and going hard like it was Game 7, no gift of a farewell tour. Nothing given, even with almost everything taken away like the years do to you. In a so-called soft labelled league this guy is Charles Oakley strong even if the tree of his basketball life is reduced to only a few more rings.

That was the real highlight of this night, showing that even in a losing season the NBA icon can still make history. Just another classic closing chapter in the books for the most storied teams greatest tale.

Get your grand-kids by the fire and tell it like it is and will always be!