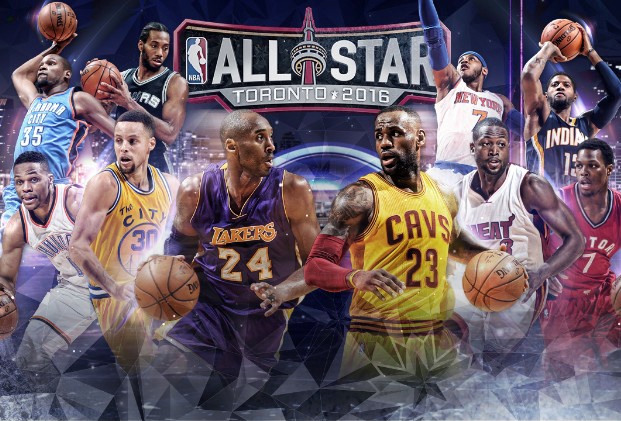 From the 305 to Drake’s city, here are your starters for the 2016 NBA All-Star Game in Toronto, Canada.

Atop the of throne as the King of Eastern All-Star vote getters, Cleveland Cavalier LeBron James leads the home side with 1,089,206 first place votes. Or does he? Representing the T-Dot and the Raptors in their arena is guard Kyle Lowry, who edges out ‘Brons teammate from The Land Kyle Lowry with 646,441 votes for what will be a special, career night of honor on his hardwood home turf…or should we say ice?

The rest of the Eastern beasts look like this. Joining Lowry in the back-court is LeBron James’ former South Beach talented teammate Dwyane Wade. Still a flash and fan favourite with 941,446 votes, just like last years New York All-Star home boy Carmelo Anthony. The Knick joining his career contemporary in the front court with 567,348 ballot papers.

The real, redemptive story of this side by George has to be the amazing one of the man with two first names. Paul George’s return from almost career ending injury to reclaimed superstar status is capped off by him doing the same to this team. The Indiana (this year) Hickory Hoosier keeps up pace with 711,595.

Out West there’s not much hotter than Steph Curry right now. Surely to be shortly joined by his Splash Brother and Dray day teammates once the reserves are announced, the reigning MVP and World Champion is about to set the tone with the shot and a million and 604,325 votes.

He’ll be joined by former NBA Finals MVP and Defensive Player Of The Year Kawhi Leonard, whose 782,339 votes are the new front-court San Antonio Spur stronghold taking over from legend Tim Duncan in more ways than one. The most dynamic duo in basketball right now will also give the Eastern a run and dunk for their home-court advantage money. As the Oklahoma City Thunder striking stars Kevin Durant (980,787) and Russell Westbrook (772,009) are about to show the Canadian cold real weather.

Must Read:
Jamal Murray. What More Can You Say?

But with a league leading 1,891,614 votes, in his 18th and last All Star Game selection, starting at the West Shooting Guard from the Los Angeles Lakers, ladies and gentlemen, boys and girls give it up for your millennial generation star, Kobe Bryant. In what will help conclude his retirement road trip tour with a fond farewell to the mid-February love of the NBA Classic, Bean is back one last time. And he can hardly believe he’s the leading man of it all.

The man who won the Slam Dunk competition in his warm ups as a rookie and once shared MVP honors with former Lakers teammate and West one Shaq back at STAPLES, as well as winning one in his hometown of Philadelphia is about to add one more, final enduring moment to the memory banks. Save some space on that iPhone because all of Hockey country will be there and it’s all going to look as good as the greatest jerseys we’ve seen All Stars rock in years. What a time to be a Canuck!

Octobers very own is about to own February like cupids arrow.

You’ve got to love this game!