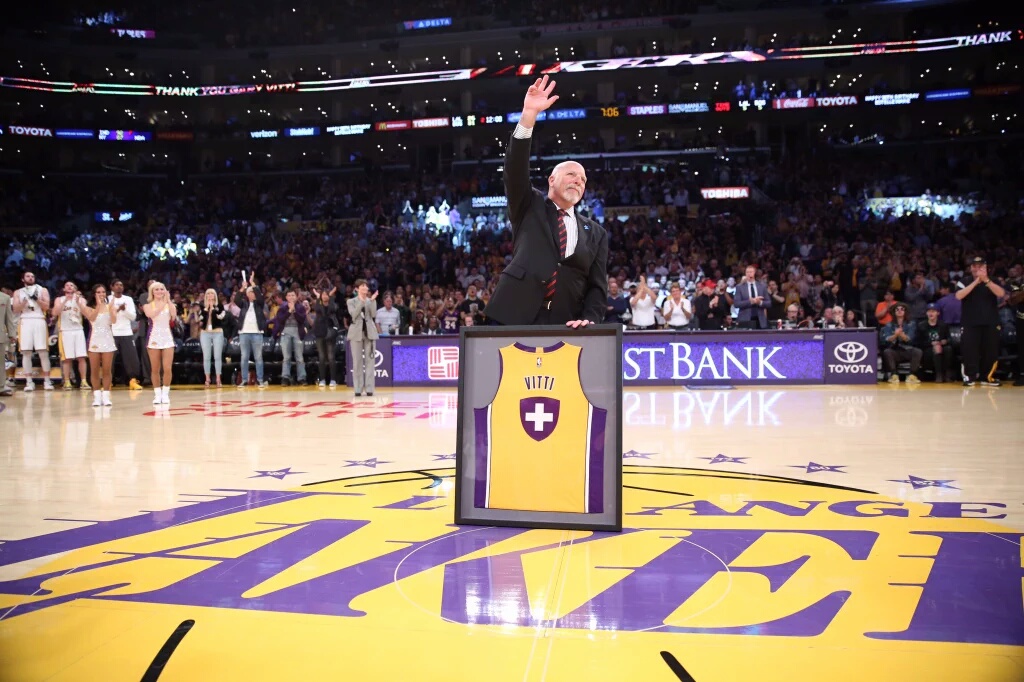 Lakers Pay Tribute To Another Legend Retiring This Season

Straight out of high school 20 years ago in 1996, number 8 Kobe Bryant made his NBA debut with the Los Angeles Lakers. Now with eight days left for number 24, one of the greatest players of all-time is about to hang up his sneakers for good and finally put his career, like feet on ice. But as Kobe Bryant retires from the National Basketball Association with five rings and practically every year an All-Star one, he’s achieved all of this with only one team. The team whose flag he waves in gold on the little purple corvettes victory lap.

Now what is better than that?

No we’re not talking about Earvin Johnson, but the only Laker legend possibly better than the Black Mamba (with all due respect to his most dominant ever, dynamic duo partner in dynasty crime, new Hall of Famer, Shaquille O’Neal and the other Goliath, 100 point man Bryant’s record 81 couldn’t touch, Wilt Chamberlain. Or of course the logo, Mr. Clutch, Jerry West. The man that brought him here) is Magic. Still we aren’t talking about the back of the Showtime starters jersey, but 32 years. That’s the amount of seasons that another Laker legend retiring at the end of this week and season has given to the iconic and storied times of the L.A. franchise.

The King of the trainers table.

He’s been through it all. From the 80’s to the new milleniuum, Showtime to the death of a dynasty. From working with Byron Scott as a player, to for him as a coach. Magic to Kobe…and now D’Angelo. And the clipboard and sponge master has been Magic with his own iconic plays. From treating Magic Johnson without kid gloves…or surgical ones. Taking them off and making a bold and beautiful statement as Earvin bled in front of millions of watching eyes, scared out of their ignorance that they could catch the feared HIV virus…but boy did Gary prove them wrong with this simple bit stellar gesture. To this year popping Kobe’s dislocated finger back into place as Vitti showed he was almost as gnarly as the man whose digit he just put back into the abacus. Tapping the back of Bryant’s neck with the love only a father figure shares with his son.

Must Read:
It's Time For The Lakers To Get 'Melo

“Everybody knows about all of the great players that the Lakers have had”, Kobe paid the press in tribute to his trainer. “But none of us would be able to get there and perform the way we perform without him. It’s just not possible. He’s the guy behind all of it. What he meant to my career is (something that) you can’t really put into words.”

Kobe’s reveived countless platitudes this year in his final season. So it was only right he did the same for a Laker legend who like him will still shape the future to come…and we aren’t talking about the next two years he’ll serve as a consultant. Just ask future franchise face Julius Randle what he means and how he aided his recovery from a rookie season ending and potentially career crippling broken leg on day one. The words he uses are simple, yet everything…”he cares”!

General Manager Mitch Kupchak (another former player with an almost career ending injury nursed back to playing health by Vitti back in the show must go on 80’s) and the Lakers presented Gary with his own framed Vitti Laker jersey. But instead of a number a purple and gold medical cross and crest was in its place symbolically. Now put that jersey up in the rafters next to all the Kareem’s and Worthy’s. Because eight of those banners are his too. As he retires we don’t have to look up to see he’s as important to this franchise of history off court as the microphone of Chick Hearn or the typewriter of Jim Murray.

And you always will be Gary!