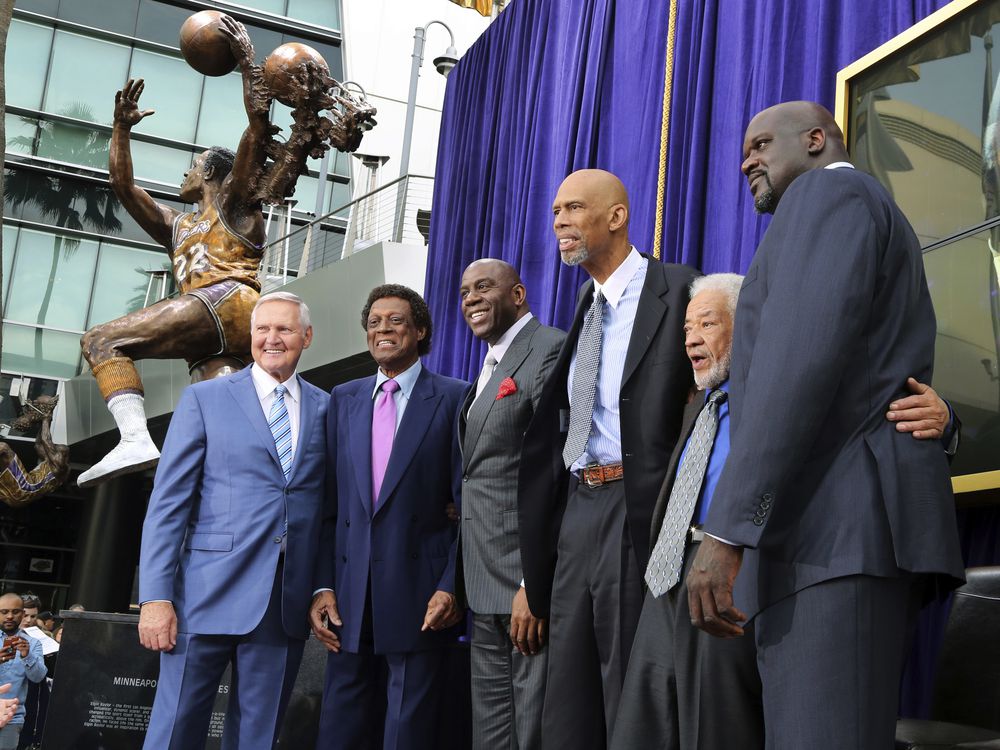 “Elgin should be here”!

That’s what the ever humble hero of the Los Angeles Lakers, Jerry West said when the famous franchise unveiled Mr. Clutch’s statue back in 2011. That’s what the actual, still to this day logo of the National Basketball Association said about his symbolic teammate in his signature moment. The ‘Ice’ to his dynamic duo nicknamed ‘Fire’.

The number 11 in SLAM magazines recent ‘Top 100 Players of All-Time’ issue, whose 22 already belongs in the rafters with all the aformentioned, both of Oscar winner Kobe’s digits and all the other Worthy Laker legends now joins Shaq, Cap, Earvin and Chick in stone setting. So much so that the Lakers will soon run out of places outside STAPLES to put their legends (especially if they give Kobe two statues). At this rate if he does come over they may have to put LeBron over in the Nokia Theatre’s parking lot. That was just a joke King…please still exile from The Land.

Without Baylor we may have not had the Dr. J. like high-flying legends of M.J. or King James. As this guy revolutionized the dunk aswell as his sky-hook impossible to guard hanging jump shot that brought career averages of 27 and change, hung with around 10 boards. And this guy stood at a Chuck power move mound rebound like 6, 4. It was this kind of offensive arsenal that set the tone with a back in the day greatest one-game point total of 71. Before Laker great Wilt’s 100 stunted that in Philly, generations before Kobe tried to beat all that with 81 (the Mamba man via video tribute telling Elgin he stole so many of his moves, “it wasn’t even funny”).

Legendary Lakers Pulitzer beat writer Jim Murray-whose L.A. Times behind the desk deserve their own statue next to Chick-compared Elgin’s Empire scaling career to King Kong. Knocking away defenders like bi-planes, who roach scattered like bust up craps games. But Baylor was more to this game then just Hollywood Laker flash. One of the first African American sports superstars in Jackie Robinson’s time also lead a Players Union protest before the 1964 All-Star, which truly changed the game and gave these players the rights they have today. After he hung them up he also won an ‘Executive Of The Year’ award across the hall with the rival L.A. Clippers. R&B superstar Elgin Baylor Lumpkin, better known as Ginuwine was also named after the Hall of Famer and called a judge character off his coming of age album ‘The Senior’ after the NBA great who starred alongside both the Jackson 5 and Buck Rogers. Don’t believe us read all about it in Baylor’s new book named after the best damn Basketball drama, ‘Hang Time’ that will be put up on shelves to end this month.

Must Read:
Will The Purple Heart Of Kobe Bryant Ride Off Into The Rio Sunset With Olympic Gold?

Elgin Baylor was the blue and white/purple and gold, post-Mikan and pre-Wilt Laker bridge between Minneapolis and Los Angeles. So it was only right his multiple arm dunking statue was curtain called at the half between a Lakers game with Minnesota. It wasn’t fitting however that donned in Mamba snakeskin black L.A. lost 113-96 to the Timberwolves with the black tux service of Jimmy Butler’s draped 18. An Elgin epic like 20 and 10 from both Lakers future Julius Randle and rookie Josh Hart (actually 11 rebounds) weren’t enough after Kyle Kuzma left the game in the third with a sprained ankle. Neither was big from downtown seven footer Brook Lopez’s starting 15 that was so tight it tagged ‘Lop3z’ Twitter trends.

But by the end of this almost 82 game closing playoff push it wasn’t all for the win, but the 82 year old that changed the game.

When you think of the golden days in Lakers purple, Baylor made this franchise like he did their storied history.

All you need is the record books to read his story.