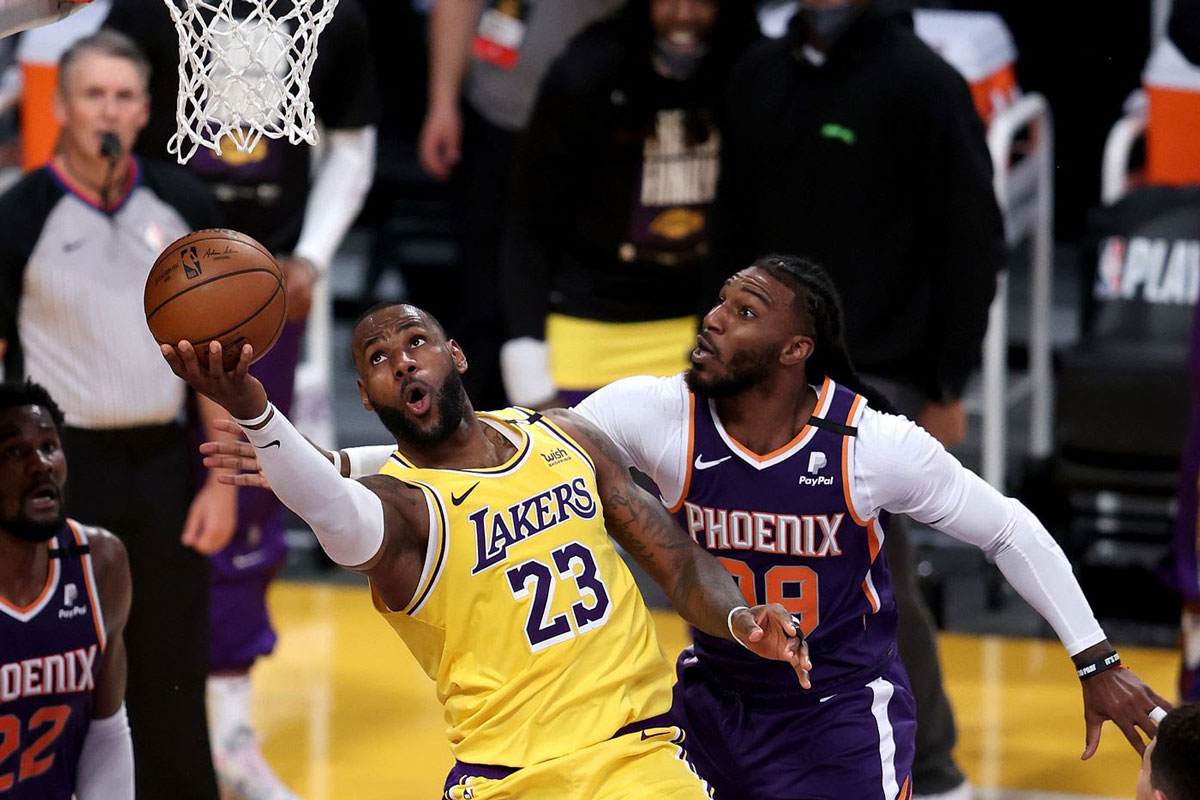 That’s almost how long it’s been since the Lakers last played playoff basketball in the STAPLES Center.

I hate to say it, but since 2013 the Clippers have been holding it down with those selfies covering up all the banners.

Sure the Lakers won it all last year in the postseason, but they did that in the Bubble of Disney World Florida.

This year its been a different story for King James and his Hollywood team.

They’ve already welcomed back fans and finally unveiled banners. Now it was time to return to the biggest stage in their quest for another one for the rafters that would see them take over the stories Celtics as all-time NBA champions.

This would for sure guarantee that the numbers 3 and 23 would have their place in that same ceiling.

The way LeBron James and Anthony Davis statistically tore the roof off tonight there is no denying that.

Fittingly, coming into this game all tied up with their Pacific rival the Phoenix Suns, the Lake Show needed something to stop the big-three of Devin Booker, Deandre Ayton and the point God, Chris Paul.

Anthony Davis after a poor performance in Game 1 in the Valley said there was no way they (the Lakers) were winning this series (let alone that game) with him playing that bad.

That’s when he became only the fifth Laker to have back-to-back playoff games of 30-plus points. Following in the footsteps of the great Elgin Baylor (let’s get those City Edition jerseys back on and win for the legend), Kareem Abdul-Jabbar, Shaquille O’Neal and Kobe Bryant.

AD was on his way with a double-double of 34 points and 10 rebounds. A legendary line screaming with passion personified.

LeBron had 21 with 6 rebounds and 9 assist for a nice cut. All to end the same week that sees his HBO show with Maverick Carter, ‘The Shop’ reopen for more barbershop banter business. This weeks guest include rapping GOAT Jay-Z and Los Angeles Sparks sister Nneka Ogwumike popping in for a trim.

There will be plenty to chop up the next time he gets into the chair for the other clippers as he played like the ‘Bron freight train some thought had already passed on through this season.

Before Jae Crowder and Booker were both tossed for a double flagrant on Lakers point Dennis Schröder (20 points), LeBron toyed with Crowder like a lion does a mouse. He even had Andre Drummond (who had his own big night on the block) imitating his back-down and crossover, multiple times courtside, as James worked down low from that corner. Muscling his way in time and fine again, before getting flexes and chest bumps from the whole bench.

The last time the Lakers scorched the Suns in STAPLES at this stage was eleven years ago when the artist formerly known as Ron Artest tipped in a Kobe Bryant clutch miss and then leapt into 24’s excited arms.

As the clock ticked down for the Lakers’ first home playoff win since 2012 the fans chanted one name like the Hall of Fame.

There’s nothing like some STAPLES Center Lakers Playoff basketball.