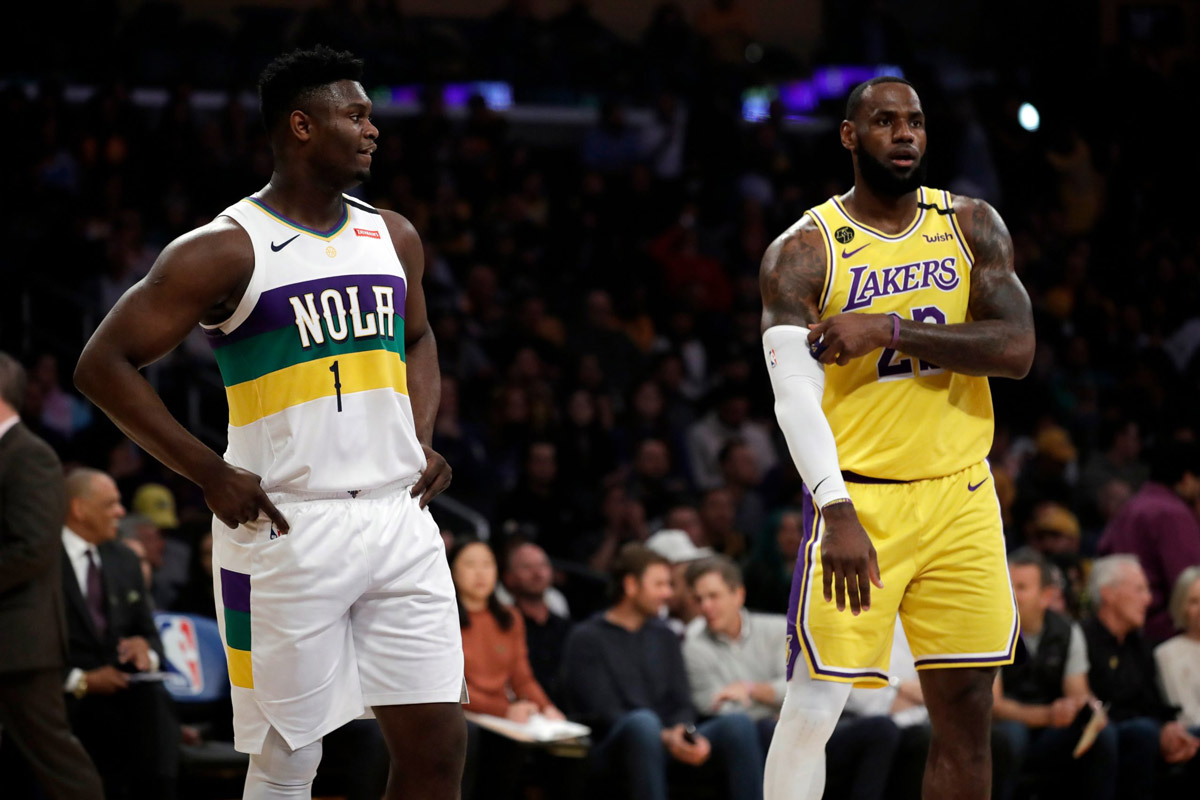 lebron vs zion. A Tale Of Two Cities

Dickens couldn’t write it better between London and Paris. This time last season Los Angeles and New Orleans were locked in stalemate as everyone in the NBA was still talking about a blockbuster trade between the Lakers and the Pelicans way after the deadline day like handing in your mid-term paper late.

It all looked like it was never going to happen. Too good to be too true. Or too much for one man. But then we all know what they did last Summer. The Lake Show gave up the house (All Star Brandon Ingram, pure point Lonzo Ball and Fox, Fisher and Horry era role player Josh Hart. Plus more picks than axe), but kept Kuz as they hauled the biggest of big men Anthony Davis from Crescent City.

A.D. left N.O. to form the best purple and gold, one/two, dynamic duo punch since Shaq and Kobe, or Magic and Kareem and he left a big hole in his wake in the Big Easy that only the biggest man and larger than life draft pick could fill like the middle of a doughnut.

Luckily the Pels had the number one winning lottery ticket as well as the, “that’s a haul folks” from the ‘Space Jam 2’ stars monster team. But as Davis became the Pau Gasol to Kobe like difference maker this season of storied chapter change, the King proved he still held the crown Kuzma placed up-top his dome.

Even at 35 like this writer with bad legs. Even the late, great Black Mamba struggled through the father time of injury at this point in his still classic career. But ‘Bron is playing like a man possessed right now. The lion King is back like that roaring different animal, same beast Instagram pic since the days of being a young Simba. And you’ve got to double-tap that.

Meanwhile when the former Laker young core of gunner Ingram, pitch perfect passer Zo and the Hart of everyone’s high-five looked to join Jrue Holiday in one of the best cities to vacation in this country for a real trip. It was the road to Zion that everyone was looking towards in Louisiana as the brass Mardo Gras band played for the all smiling, all culture Nike commercial from the Mississippi to the Rising Sun of Rui in Tokyo, Japan in the Olympic 2020 year for Hachimura on the hardwood.

Must Read:
Welcome To The 2021 NBA All-Star Game In Atlanta

Still after tearing his meniscus like his Nike sneaks at Duke, Williamson was starring at the Greg Oden abyss and missing most of his rookie campaign like Joel Embiid. But then like the New Year he came back around like fireworks and boy did he blow. The incredible hulking strength of this man child that’s about to takeover the avenging assemble of the association with a Thanos snap of the fingers.

But the King is far from the endgame now in what seems like an infinity war.

Now just when everyone thought the Giannis and Harden beef would result in this year’s MVP, the King watching the throne has shown there’s more at stake like his teammate A.D. and for sure Defensive Player Of The Year looking like his only competition. Just like he was the only other All Star teammate out West this year’s weekend last month of love out in his hometown Chicago.

And just when everyone thought Ja Morant was going to rule as Rookie Of The Year like his rapper namesake the game in the 2000’s, Zion has come in like 50 Cent to get the R.O.Y. or die trying.

Never that. In this revenge season you can see Mount Zion from LeBronland.

Last month, Zion at 19 went up against James at 35, as the two best of the best combined for you guessed it.

And now between the veteran and the kid, the number one and the 23 like M.J. you’re looking at two of the biggest players and influences in this game right now with their signature similar slams, father time to “your time is now”. “Here’s looking at you kid” and the man who won’t retire until he suits up next to his son Bronny Junior.

Must Read:
Damian Lillard Put Some Respect on my Name

LeBron and Zion. Big first name, need only one basis like Shaq and Kobe. Two of the most famous faces and franchises unto themselves in the L getting the W in more ways than one. Two guys who are to defenders what fruit stalls are to, ‘The Godfather’. Let’s make a play and take it to the mattresses.

Now we can’t wait for Part III between the man who reads Mario Puzo’s crime classic like it was the Bible and the most anticipated and worthy of that hype rookie since himself in Zion. Williamson and James have already faced off twice for epic events on the circle your hoops calendar in this 82 schedule. And despite ‘Bron’s bully ball, the young body has more than held his own with his formidable frame. This all makes for the perfect preview for the postseason and potential first series of the playoffs if the Pels can lock up the number 8 seed like they do top trades.

It all looks storybook scripted by the Basketball God’s. The King versus the young Prince in a serious series that could even twist of fate have upset written all over it like break-up texts, as Anthony Davis will return against the team and all the former let go young Lakers that want to serve revenge with a Ball dish like Iverson stepping over Lue cold.

In lieu of this could you even think of a better match-up than the one between these two cities and their most famous landmarks?