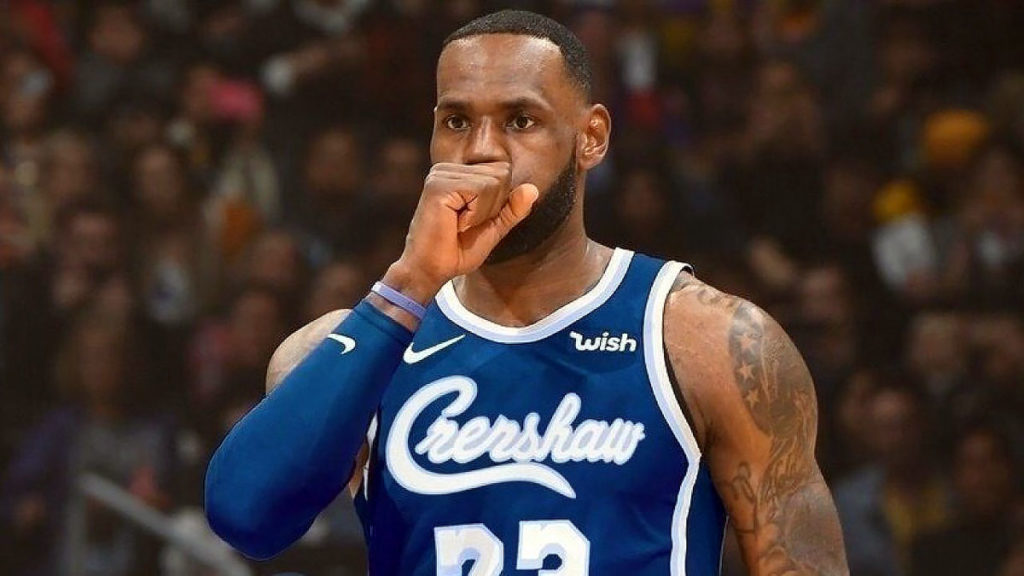 Lebrons La Should Be Crenshaw Lakers For Nipsey

Nipsey Hussle meant more to the L.A. than courtside seats and throwback jerseys from Magic to Chamberlain. The late, great rapper and Lakers fan for life was also an entrepreneur and community leader in Los Angeles.

The whole globe felt the pain of his passing, not just the United States, City Of Angels or rap world. But many in those arenas like the Basketball ones paid tribute. From Russell Westbrook’s legendary 20-20-20 line for Oklahoma City Thunder in tribute to Hussle and LeBron’s suit and tee tribute, along with countless scrawled signatures on in game sneakers all over the feet of players throughout the league.

But recently on vacay in Italy the King went one better…although we won’t talk about the shorts and fanny pack. But hey at least he wasn’t posting about Taco Tuesday again.

What day is it?

On the Italian Riviera, James posted himself wearing a number 23 jersey in old Minneapolis Lakers blue. But this wasn’t for Minny, or L.A. as the James jersey LeBron was rocking had ‘Crenshaw’ on the front in the old style Lakers script from the Elgin Baylor days.

This jersey mocked up and inspired by the Photoshop of digital artist Grant Goldberg is really taking off now. Just showing the power of not only this player and of course Hussle’s legacy, but the social media hustle age of graphic design when it comes to jersey mock ups drip fit for a King.

Forgot Nike ID designing your own sneakers, this is the next gen, new age of choosing what your team rocks on court like NBA Live.

“Can’t take a whole lot of credit, I just put the Photoshop together. It’s all Nipsey,” Goldberg humbly replied via Twitter.

But does he know what he’s started?

Now people want to make this official. For fans of the Lakers and Nipsey alike and beyond. And you know what fans lobbying these days can do on Twitter. At this point we’re going to get ‘Melo Anthony back on court…and thanks to the disabled player exception accepted for DeMarcus Cousins it could just be for the Lakers too. Now imagine buddies ‘Bron and Carmelo in Crenshaw.

C’mon NBA grant one more wish like Will Smith’s Genie for ‘Aladdin’. This would mean so much to Nipsey’s family and the community. You’ve had jerseys honouring the Hoosiers like the Hickory Pacers out in Indiana so why not this? The Lakers are yet to release their new Nike Classic Edition line for the series and this may be why. Although rumours of the Minneapolis blue but with Lakers on the chest are taking front. But if that’s the case that sounds good and all, but how about a City Edition then? We’d even go for the baby blue on MPLS on white. It would even be more Magic then last year’s Los Angeles Lakers across the chest pinstripe season specials which almost took the full 82 to get used to.

If Nike and the Lakers make Crenshaw work on court then this will be as good a luck as respected Raptor assistant coach Phil Handy coming over from Canada and helping expand the likes of even Anthony Davis’ game.

But what the big man wears as he shoots threes and for DPOY could really raise eyebrows.

But like many say if the Lakers don’t do it, their rivals the Clippers sure would. And as some say too, just imagine the battle for Los Angeles between A.D. and the King Vs Kawhi and P.G. complete with Crenshaw Lakers and Crenshaw Clippers jerseys as these two teams go to war and leave it all on court. Now that would be symbolic and city patriotic.

It would make for one showstopping, outstanding opening night.